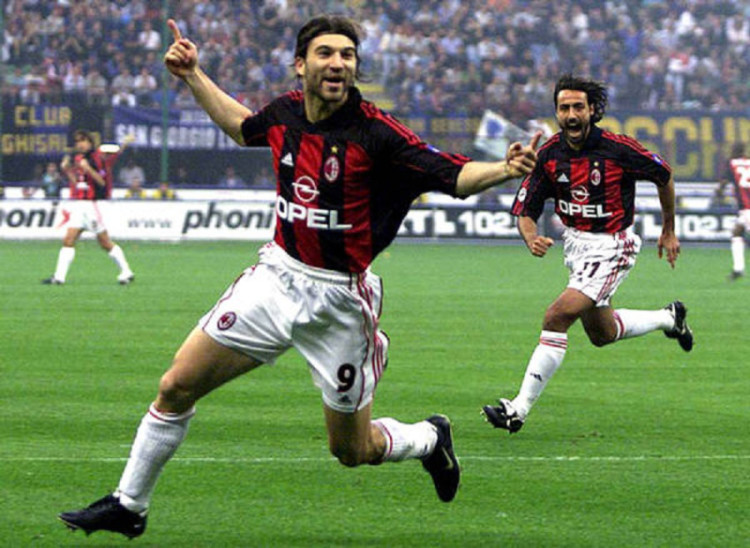 May 30, 2001, is a date etched into the memory of AC Milan supporters. That evening, the Rossoneri thrashed city rivals Inter 6-0 in what remains the biggest win in Derby della Madonnina history. The first two goals of this famous victory were scored by a 24-year-old striker called Gianni Comandini. They were his first goals for the club and if football were a fairy tale, Comandini would have gone on to become a club legend. But his career took a drastically different path.

Born in Cesena in the Emilia-Romagna region, Comandini signed for his hometown club and came through their youth ranks before making his first team debut in Serie B during the 1995-96 season. This was his one and only appearance that campaign and in order to gain some regular player time, Comandini was loaned to Serie C1 side Montevarchi. He appeared 28 times for the Tuscan side and helped them secure promotion to Serie B, scoring three times along the way.

The move served its purpose and enabled the young striker to become accustomed to the rigors of first team football. Comandini reaped the benefits the following season, scoring 14 goals in 35 games for Cesena. His performances were enough to catch the eye of Vicenza, and the 21-year-old signed for the Veneto side under the condition that he spent the next season on loan at Cesena.

Gianni eventually turned out for the Biancorossi during the 1999-00 season and under the guidance of coach Eddy Reja, he enjoyed the most successful campaign of his career. Vicenza won the Serie B title and promotion to Serie A while Comandini scored 21 of the Lanerossi’s 65 goals. Things progressed quickly for the Italian target man and during the summer of 2000 he played a vital role in Italy’s success at the Under 21 European Championships. Comandini’s performances alongside other young talents such as Andrea Pirlo and Nicola Ventola convinced AC Milan he was worth an investment of 20 billion lire. The Rossoneri’s faith in the youngster was such that he was granted the illustrious number nine shirt.

However Commandini only made 13 appearances during his debut season as a squad full of superstars coupled with injury problems stymied the forward’s progress. He did showcase glimpses of his talent, especially during his derby heroics against Inter. His two goals were clinical, the first an instantaneous left-footed finish from six yards and the second an unerring header into Sebastian Frey’s far corner. He would have had a hat-trick were it not for Frey’s heroics in the Nerazzurri goal. Nevertheless,   unable to get any continuity to his game, the striker was moved on to Atalanta.

Comandini’s transfer from Milan was a surprise on two fronts. Firstly the Diavolo made a ten billion lire profit on the striker and secondly, the team that came up with the fee was Atalanta, a club famed for selling off their assets rather than indulging in big money transfers. It was a decision the club from Bergamo came to rue.

After four injury plagued seasons and a poor return of seven goals in 47 appearances, Comandini was deemed surplus to requirements. Further disappointment was to follow and after an unsuccessful loan spell at Genoa in which he made just 10 appearances, Comandini moved to Ternana in January 2005. Yet after scoring just one goal in seven appearances for the Rossoverdi, Gianni decided to hang up his boots.

In 2005, at just 28-years-old, Gianni Comandini had retired due to persistent physical problems and a desire to leave the cocooned world of professional football. He embarked on a new adventure and far from being deflated, he embraced a new life and discovered a new passion…surfing.

Comandini swapped the synthetic football jersey for a wetsuit, travelling to Brazil, Australia, New Zealand, Bali and Sri Lanka in search of waves. He embraced his new carefree environment, which was a far cry from the controlled and measured world of Italian football. Sleeping on beaches or in hostels and cheap hotels, Gianni was living the dream of most young men, travelling and enjoying life without any constrictions.

A reflective Comandini has now settled back home in Cesena along with his young family. He has a bar where he DJs and like most things in his life, it is a small and modest club holding around 800 people. Playing the music he loves, including the bands he listened to as a young man such as AC/DC, Red Hot Chilli Peppers and Queen, he can now reflect on a life that has come full circle. “I have travelled a lot but in the end, I returned to my passion as a teenager: the life of a DJ. Now I can savour the music I’ve always loved.”

Reflecting on football Gianni is thankful for what football has given him but doesn’t regret his decision to retire early.

“[Francesco] Totti is older than me and still plays. It’s true every now and then I think about football. But for someone like Totti, football is a very important part of his life. Instead for me, football was just a chapter, an unforgettable and beautiful one, but only a chapter. I am still grateful to the football world because it is allowing me to live the life that I always wanted to live. But if someone asks me what I recommend doing in the future, I would advise becoming a surfer.”