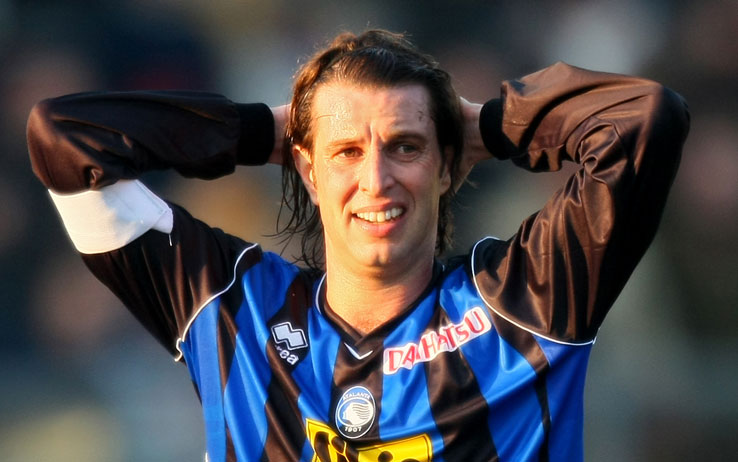 ​It is Spring 2014 in the tiny little village of Orio al Serio, located roughly four kilometres from Bergamo. A group of 20 or so kids ranging from ages 9-11 are attending a football camp. Each kid listens attentively to the coach as he advises them on what they are about to do. Showing a nice personal touch, he addresses each child by their name and attentively listens to any questions they may have.Hours before the camp was set to begin a number of banners were installed on the fences surrounding the area in protest about the coach’s presence. They are however quickly taken down.  It may seem strange for a protest to be held outside a camp for young kids but the man giving the lesson is no ordinary coach. His name is Cristiano Doni and technically he is serving a three-and-a-half-year ban from all footballing activity for his role in the Calcioscommesse affair.

Most of the parents though don’t seem too perturbed about who is giving the lesson. Doni was after all a legend at local club Atalanta, and he remains to this day the club’s record goal scorer. Nonetheless, his role in the Calcioscommesse scandal has tarred him with a black mark among many in the area.

In fact, opinion on Doni is spilt between two factions, those who would now prefer to let bygones be bygones and those who still view him as a traitor for what he has done. Should a man convicted of match fixing and still serving his ban be allowed near possible future stars of the game? Is it one strike and you’re out, or as fellow coach at the camp Fabio Gallo put it, “To err is human and he can explain to the children what should not be done.”

Cristiano Doni was born in Rome on April 1 1973. His footballing career started in earnest with Modena in 1991. Over the first seven years of his career, Doni would leap form club to club having spells with Rimini, Pistoiese, Bologna and Brescia. In 1998 he would eventually join the club where he would make his name, Atalanta.

Through his 11-year timeline with the club, split between two different spells, Doni would score over 100 goals and, as already mentioned, would become the clubs record goal scorer by a considerable margin. Doni would also claim the record for the being the most capped Orobici man to ever wear an Italy shirt. The magic number being seven caps and one goal to boot. He was also part of the Italian squad that went to the 2002 World Cup in Japan and Korea. A World Cup that ended in very controversial circumstances for the national side.

Doni would leave the Bergamo based outfit in 2003 to sign for Sampdoria and later Mallorca in Spain. In 2006 though he would return to Atalanta, a club where he felt most at home, reportedly taking a wage cut. Life looked to be going well for Doni, he was entering into the twilight of his career at a club where he was idolised. Then, as sudden as a switch of a light, it all came crashing down around him.

In June 2011 he was arrested along with 16 other men in connection with a match fixing and betting scandal. The scandal focused mainly on matches in the lower divisions and would become known as the ‘Last Bet’ or Calcioscommesse affair. The investigation into the illegal activities was spearheaded by prosecutors in Cremona and one Roberto Di Martino in particular. They would soon uncover a vast web of illicit betting and attempted match fixing, with links to criminal organisations as far away as Singapore.

When Police came to arrest Doni at his house, it is alleged that he tried to flee the scene through his garage after opening the door to the officers. Doni would then spend the next five days in solitary confinement before he was allowed to speak to his Lawyers. Soon after, he was questioned by prosecutors investigating the whole scandal. Initially Doni protested his innocence to all the charges brought against him. In December 2011 however, La Gazzetta dello Sport reported that Doni had admitted to fixing matches in Serie B.

His justification for partaking in the scheme was because Atalanta were not supposed to lose, “Yes I knew about the fix for Atalanta v Piacenza,” Doni admitted, “I gave my approval and I bet. I said yes to the fixes because Atalanta benefited.” Ironically Doni’s attempts to help the club would do the opposite as they were handed a six-point penalty and he received a three-and-a-half-year ban from football. In addition to the match fixing chargers were the even more grave accusations that Doni attempted to destroy evidence.
The prosecutors reportedly had intercepted a phone call between Doni and Ravenna Keeper, Nicola Santoni (also arrested), in which the two men discussed tampering with Santoni’s IPhone which had been confiscated by the Police in June 2011.

It is an issue that still very much haunts the former Atalanta man as in April 2015, he was questioned on the matter by Prosecutor Di Martino. The interrogation was said to have lasted 70 minutes and became extremely heated between the parties involved. At one stage, Doni’s lawyer Salvatore Pino, even asked for a break in proceedings in order to try and calm his client down. In the end the prosecutors got very little from the player as he claimed to remember little of the conversation with the Ravenna Keeper.
“After four years I do not remember anything about that chat,” Doni protested, “I remember however that Santoni told me something. I listened but then for me there was no action.”

If he does return to Calcio there is one place where he most certainly won’t be welcomed back and that is Atalanta, where, despite holding numerous club records, his reputation has been tarnished forever. The big question however is should Doni even be allowed back into football at all? We have seen how in Cycling and Athletics, athletes are permitted to return from bans and compete. But should Calcio follow a similar route and give someone a second chance? Or should the world of football take a sterner approach and banish anyone who has brought the game into disrepute.

Will a cheater cheat again, or can you take them by their word?
“I would never have listened to anyone who offered me money to make my team lose. I made a mistake and now I can’t even look at myself in the mirror because it makes me think about all the pain I’ve caused my family and the fans.” – Cristiano Doni
​

Want to visit Bergamo to see Atalanta play. Check out the link below for tickets