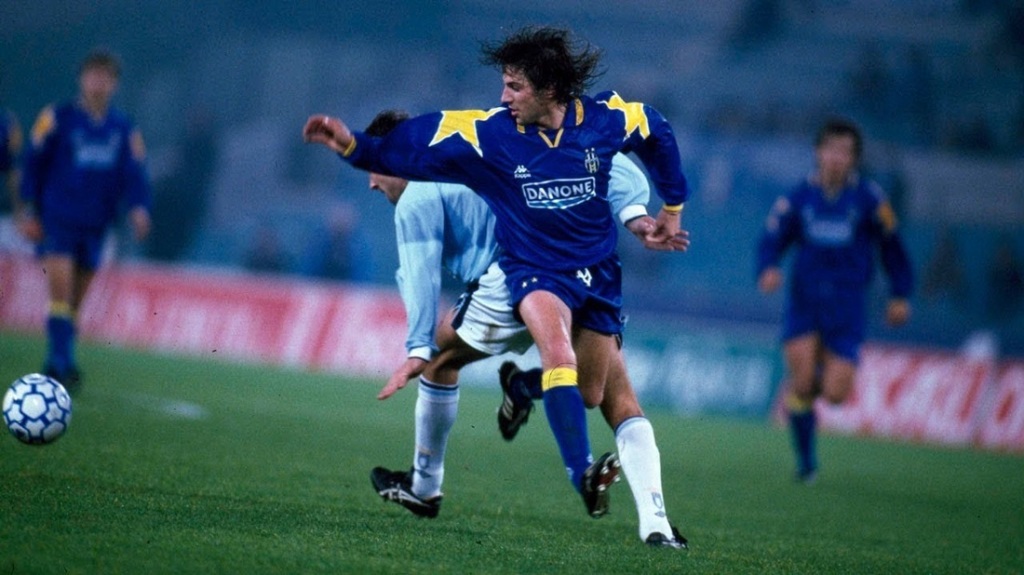 Juventus travel to the capital on Saturday to take on Lazio. With the Bianconeri unbeaten against the Biancocelesti in Rome for over a decade, it seems unlikely that Simeone Inzaghi’s men will stop the irresistible force that is Juve. During the 1994-95 season, however, Juventus visited the Stadio Olimpico not as champions, but as contenders who were trying to break the stranglehold AC Milan held over the Scudetto. The game turned out to be a classic.

Under the tutelage of Marcello Lippi, Juventus knew a win could send them top of Serie A, whilst Lazio, led by the fabled Czech tactician Zdeněk Zeman, were looking to improve on their sixth position. In typical “Zemanlandia” style, Lazio attacked from the off and, spurred on by a vociferous Stadio Olimpico crowd, they quickly pinned Juventus back. The pressure paid off when in the 20th minute, a Giuseppe Signori cross was parried by Juventus goalkeeper Angelo Peruzzi. The ball felt to Roberto Rambaudi, who slotted home despite the despairing lunges of the Juventus defence.

The game was then turned on its head in the space of ten frantic minutes. In the 28th minute, Lazio defender Roberto Cravero went on a marauding run only to misplace a pass on the edge of the Juventus penalty area. In a bid to halt the impending counter-attack, Cravero (who was already booked) threw out a hand to divert the ball away from its intended target. Referee Livio Bazzoli had no choice but to show a second yellow reducing the Biancocelesti to ten men.

Zeman responded by making a controversial substitution, replacing captain Signori with defender Cristiano Bergodi. Signori was incandescent, remonstrating with his coach before heading straight down the tunnel. The Bianconeri were then forced into a change of their own after Massimo Carrera picked up an injury. He was replaced by a man who was to become familiar with Blackburn fans, foward Corrado Grabbi. Lippi’s men soon made the one-man advantage pay; a cross from the left found Alessandro Del Piero and despite a heavy first touch, the indecision of Lazio goalkeeper, Luca Marchegiani, allowed Del Piero enough time to poke the ball home. Parity was kept until half-time.

After the break, the Lazio defence was exposed once again after some intricate build-up play between Del Piero and Grabbi released Antonio Conte down the right flank. Conte picked his pass and delivered a perfect cross for Giancarlo Marocchi to score at the far post in the 53rd minute. Just minutes later, Lazio had penalty appeals waved away as Pierluigi Casiraghi appeared to be obstructed trying to get on the end of a low cross. But the game was to slip further out of Lazio’s grasp after Del Piero scored his second. It was undoubtedly the game’s best goal. Receiving the ball about 25-yards from goal, the Juve no. 10 shrugged the attention of the same two Lazio defenders twice; first dropping a shoulder and heading towards the byline, and then showing quick feet to jink between them and curl the ball past a helpless Marchegiani. The game looked lost for Lazio when a slick passing move including the impressive Del Piero and his strike partner, Fabrizio Ravanelli, allowed substitute Grabbi to score and give his side a three goal advantage with ten minutes to play.

But Zeman sides were renowned for attacking till the end and just two minutes later, Rambaudi seized upon a lose pass, shrugged off the attention of two Juve players in the penalty area and laid the ball across to Casiraghi who duly cut the deficit. Deep into stoppage time, some indecisive defending and a poor clearance from Alessio Tacchinardi allowed Diego Fuser to control the ball on the edge of the area and place it into the corner of Peruzzi’s goal. Unfortunately for Lazio fans, it was too little too late and Juventus held on for a win that put them top of the league.

The game had great implications for the title race as Juve finished in first place, ten points above their nearest rivals Lazio. This Saturday’s game is unlikely to prove decisive at this early stage in the season but if it’s anything as good as their encounter during the 1994/95 season, we are in for another classic.

Mark is an Italian and Dutch football enthusiast. He writes for @GentlemanUltra, @football_oranje and created@sempre_bari, the account for all things FC Bari in English.
​