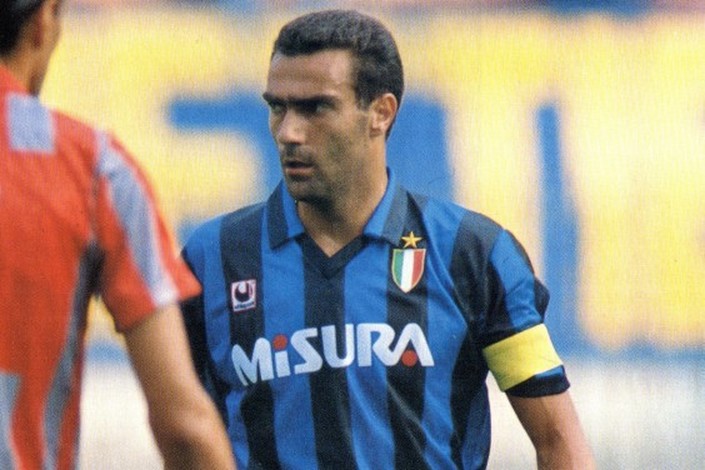 He was ‘The Uncle’ from seventeen, the boy who marked Karl-Heinz Rummenigge out of a World Cup final, he was the man with ‘that’ moustache, the darling of the Nerazzurri and yet he was a man who suffered from depression and a man who was nearly sent to Coventry. He is ‘Beppe Bergomi’.

For most, the battleship stature of the San Siro’s pillars and its suffocating vertical stands are enough to put fear into any player or fan. Simply being inside the structure, even when empty, is like standing in front of a Victorian headmaster, the upright grey frame towering over you with a threat of impending violence. It was in this empty and foreboding backdrop, that I waited to interview ‘Beppe’ on a cold September Monday morning.

His simple emergence was enough to see the man as an enigma. His smart but casual dress and his bright white smile, seemed to embellish the tag of ‘Uncle’ he has held for many years. Yet as he walked out of the tunnel to stand under the Curva Nord, his steely glance to the upper echelons of the empty beast of a stadium seemed to tame her. The entire structure seemed warmer in an instant and before he had said a word, the understated and clam manner in which he conducted himself, made sense of why he was so successful on the pitch. By the time the interview had finished (and even with my mediocre understanding of Italian), his words had made me feel like I would run back to England and join the parachute regiment had he asked, never mind simply play 90 minutes of football.

Rewind to 1982; the World Cup Final in the Santiago Bernabeu stadium in Madrid. Bergomi had expected to be sitting on the bench. But after an unexpected injury to Giancarlo Antognoni, he was instructed that he would be starting. At 18 years of age, he is the youngest in the squad. Yet his mature attitude, outstanding ability and his incredible moustache (grown specifically to make him look older) have convinced coach Enzo Bearzot that he should start. ‘Beppe’ was soon to learn that, not only was he to start but he was also set to mark Karl-Heinz Rummenigge, Germany’s captivating and dynamic midfielder who had come off the bench to put France to the sword in Sevilla the round before.

Bergomi had only been a professional for a year and a half and most of this had been spent with Inter’s Primavera squad, although his strong and disciplined displays had managed to get him a call up to the first team. Before long, he was playing for them against Real Madrid in Europe. His mesmeric rise was also mirrored in the national team where he moved quickly through the under-21s to end up in a World Cup, featuring as an energetic substitute before his biggest stage lay before him at a tender age.

Rummenigge was not fully fit in the final but the European player of the year was still expected to be a threat and he proved this from the off. His ability to take on defenders must have shocked young ‘Beppe’, but his calmness under such extreme pressure saw the 18-year-old gradually tame his 26-year-old counterpart. As Bergomi grew into the match, he pushed the German out of it. He was playing at right back in the game and was immense in his reading of the play. As the whole of Italy fell to her knees on the final whistle, the young man from Milan realised that this 3-1 World Cup win was just the start.

His return to the domestic game was made with gusto and now the boy had really become a man. Speaking to UEFA.com about his memories for the Nerazzurri he said:

“When you grow up at such a club and you manage to break through into the team, you don’t feel like going anywhere else. It feels like your second skin. And this makes you feel special”

His aim was always to stay at one club and he reached his dream making over 750 appearances in all competitions over a 20-year period.

With his very specific look, tall, athletic and almost old fashioned facial hair, it was no wonder that many thought his to be a player from yesteryear. He did in fact have many qualities of a defender an era previous. He was tough but fair, pragmatic, disciplined, good in the air and tactically astute. But he could also play. His range of passing was superb and in possession, he would find no problems with bringing the ball out and looking to start an attack from the back. His early time at full back meant he had always had pace but it also perhaps captured his penchant for the offensive. If you look back over his goal repertoire (although only 23 Serie A goals) some may impress you, just look at his strike against Lazio in the Stadio Olimpico in 1989. That’s some hit.

Despite his multitude of talents, Bergomi will perhaps be unfairly tagged as the Captain who won too little. In a number of under achieving Nerazzurri teams, he picked up only a single Serie A title, one Coppa Italia and two UEFA Cup’s. Whilst this is not to be sniffed at, it is arguable that these sides should have picked up more silverware, although it is perhaps down to the brilliance of Juventus and AC Milan during this era.

After the World Cup in Spain, the man now constantly referred to as ‘Uncle’ was a feature in the 1986 World Cup squad in Mexico and played in the Euro’s in 1988. He has admitted since, that Captaining the team in Italia 90 – where on home soil Italy reached the semi-finals before being eliminated by Argentina – was a memory equal to that of the World Cup win in 1982. His Italy team didn’t concede a goal for 518 minutes of football before they lost in the San Paolo to Maradona’s Argentina. Things were on the up it seemed for ‘Il Capitano’, he even held a bizarre record of featuring in three World Cups but never playing in a qualifier. However, ‘Beppe’ would shockingly be dropped from the Italian national team in a cruel twist of fate after getting a red card against Norway in the 1991 European Championship qualifier – he was only 27 years old.

The years in the wilderness were tough on Bergomi and he admitted to the Gazzetta Dello Sport years later that this made him doubt himself and brought on depression. He found it hard being left at home whilst his team played in USA 94’ and Euro 96’ and in the end he questioned himself constantly. He said when he was young he had no fear but now, after a bad game for Inter, he would go into ‘crisis mode’. Despite this, he never gave up hope. This belief, however hard it came, was rewarded and in 1998, at 34-years of age he was called up to the national team again thanks to Cesare Maldini. It was reward for the neglect he had suffered.

As his career was running down, Bergomi continued to impress and it was only in 1999 that he hung up his boots for the final time after 20-years with the Nerazzurri. The man who served one club is now a legend at Inter but this could have been different, he nearly carried on.

In an interview with FourFourTwo magazine before England played Italy in Brazil 2014, he spoke of a strange situation where he nearly ended up at Coventry City:

It has been one of the biggest regrets of my career that it didn’t happen. When I was coming to the end of my playing days, Gordon Strachan was the coach of Coventry. He came to me and said ‘Ronald Nilsson is leaving, he’s 36 the same as you. If you want to come and join us, we’d love to have you here’. I said no. I wanted to finish my career having played only for Inter Milan. But looking back it’s a big regret. Maybe, if I had accepted, I would now be working as a manager. In England.

The thought of this is almost too bizarre to comprehend. But had things been different, this legend of Italian Football could have been rubbing shoulders with Paul Telfer and David Burrows.

Instead, ‘Beppe’ has tried coaching at Monza and Atalanta and he regularly commentates on Sky Italia. He also is very active around Internazionale still and this seems fitting. Bergomi left his beloved club at the right time and in the right way. On that cold September morning he spoke of a subject dear to his heart: that even club legends need to know when it is the right time to leave for the good of the group, and that they should not be held by their own emotions and nostalgia for that which they love. Spoken like a true Uncle you might say.