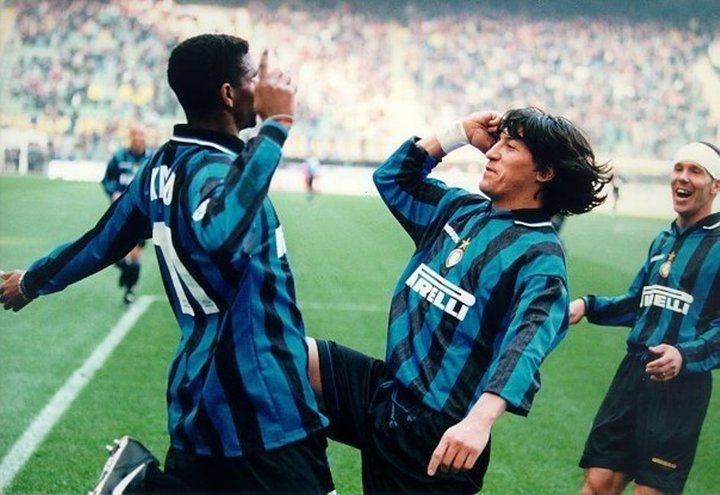 Exciting times lay ahead at the Giuseppe Meazza back in 1997 as Inter launched their new home kit for the upcoming season. Sticking with an English influence from the previous season, Inter had their new shirts manufactured by Umbro once again.

Following with tradition, Umbro kept this iconic Nerazzuri jersey simple yet effective. The iconic blue and black vertical stripes made up the majority of the shirt, and the bright white ‘Pirelli’ logo stood out on the chest as we’ve become accustomed to with Inter shirts over the years. Simple black shorts and socks completed the look, along with bold white letters and numbers covering the back of the shirt.

This season would be the first time il fenomeno (Ronaldo) was seen on Italian soil after Massimo Moratti broke the bank to gift wily head coach Luigi Simoni the Brazilian superstar. 1997/98 was also the first time Inter mounted a serious title challenge for several years.

Going the first 12 rounds undefeated, Inter would finally finish second to Juventus. Ronaldo went on to score 35 goals in all competition, helping Inter to a UEFA Cup triumph where he singlehandedly destroyed Lazio in Paris. This iconic shirt will always be remembered by the Inter faithful as the first time they witnessed the famous ‘Ronaldo 9’ on the back of their beloved colours.