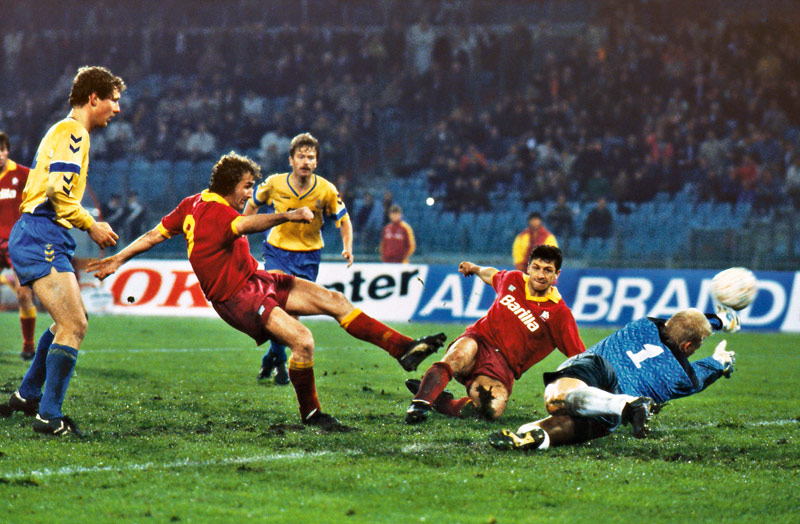 ​If you frequented Roma’s Curva Sud in Serie A’s golden age of the late 1980s and early 1990s, you would have heard the Ultras bellowing, ‘Fly German, Fly.’

They were referring to their lethal forward Rudi Voller, who even today holds cult status in the city. His trademark was the flying header, a lost art in today’s game. The forward has a special relationship with the Giallorossi faithful and for five years he treated them to a lesson in goal poaching.

Whilst Serie A was enjoying a fairy tale era, the man from Hanau was arguably more of a tale from the town’s other famous sons ‘The Brothers Grimm’. Voller had an edge to his game and a tenacity that often landed him in trouble. He found it hard to control his frustration. This however, seemed insignificant at times, as his playing style seemed to be based on that of the legendary Gerd Muller. Ambling around the pitch on the last shoulder of the defender, he would seem uninterested. Then, as the ball was played into the box, defenders would be left static, only to regain their wits as Voller wheeled away in celebration. All this before anyone could understand how he even manged to break loose.

The West German arrived in the Eternal City in 1987 after finishing the previous season as the Bundesliga’s top scorer. The first season didn’t go to plan as injuries hampered his integration into the team, so much so that he only scored three goals. His fortune did not change at the beginning of his second season either, as he only managed to net one more time by Christmas that year. He was a hit however, as despite the lack of return, his work ethic was admired and by the end of the season he was flying – quite literally a ‘German Bomber’.

‘Il Tedesco volante’ was a nickname he relished. After all, it was better than his national team equivalent. Thanks to German team ‘mate’ Thomas Berthold, his greying perm had earned him the nickname ‘Tante Kathe’ or Aunty Kathy. Both players had grown up in the Frankfurt area and the term was used to describe old ladies who wore their hair in perms. Voller didn’t care, stating that “I would rather be grey than bald”.

In Serie A, the German was testing himself against some of the best defences in the world and despite only winning a Coppa Italia with the Giallorossi, he appreciated what he had achieved.

“In those days you only had Italy,” Voller told FourFourTwo magazine years later, “England was far away and Spain fell behind. All the players who wanted to achieve something, to make it big and to play in the best league of the world, came to Italy.”

Whilst Inter, Napoli and of course Milan dominated that period, Voller can be proud of his contribution and was a key component in a team that featured Bruno Conti, Ruggerio Rizzitelli, Aldiar, Giuseppe Giannini, Andrea Carnevale and his ‘best’ friend Thomas Berthold.

The Flying German was the archetypal number nine. He studied his hero Gerd Muller, especially his close dribble which enabled him to beat the facing defender with only a foot or two between them. This combined with his bravery — on occasions throwing himself towards the ball to get his goal — often saw him come out on the wrong end of a defender’s boot, something to which Voller always took umbrage.

For anyone who watched the Roma man, they will remember his pleading face towards referees when he was in trouble. The German was cunning in his retaliation and was not adverse to play-acting – just ask Frank Rijkaard, who saw this firsthand in Italia 90. Stamps down the shin and elbows were also used (when needed) and this made him a metaphorical and physical threat to the defenders he faced.

His vicious shot and incredible aerial ability saw Voller score 45 goals in 143 league appearances and, in total, 68 goals in 198 games. When assessing any strikers record during this era, one has to acknowledge the strength of Serie A’s defences. He is the club’s third highest-scoring foreign player behind Abel Balbo and Pedro Manfredini (it should be noted that the Brazilian-born Dino Da Costa played international football for Italy).

When Calcio really did rule the World, Rudi Voller was everything Roma needed from a foreign star. He was individualistic, heavily influenced by his roots and yet absolutely in love with the city. Five years at the club saw him become another of Roma’s glorious nearly men. One whom the Romanisti laud for his efforts over silverware. That is apart from one trinket he won in the Stadio Olimpico, that being the 1990 World Cup. Describing that triumph he said:

“For me it was like a dream come true. It was my third year in Rome and I played the World Cup final in ‘my’ stadium, it was almost a home game for us. It certainly helped that we had to play against Argentina. If the final had been Italy, it would have been more complicated.”

Richard is the founder of The Gentleman Ultra and an Italian Football Writer contributing to @Guardian_sport, @FootballItalia, @CmdotCom, @SiriusXMFC and beINSPORTUSA