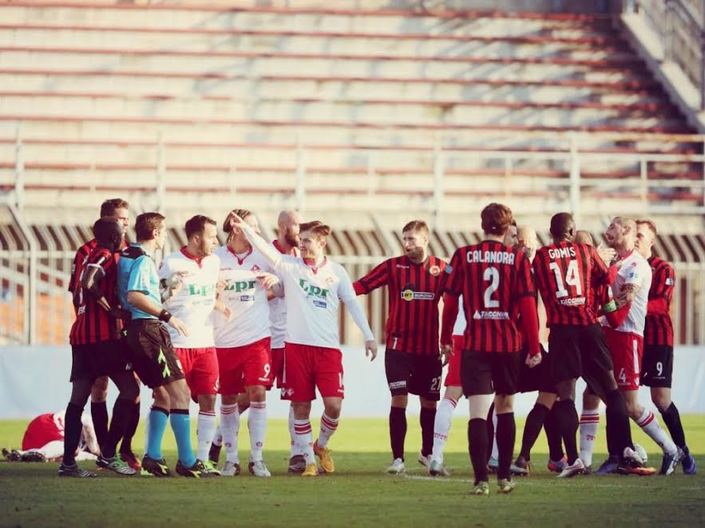 Back in early 2015, The Gentleman Ultra featured an article about Piacenza Calcio and their financial struggles. Now safe from the turmoil of recent times, the club hailing from the Emilia Romagna region have recovered some stability and currently sit tucked away in the third tier of Italian football – in Group A of Lega Pro.

Lega Pro’s regional flavour does bring the province’s football fans some traditional adventure in the shape of clashes against Livorno and Como. Meanwhile, Piacenza’s local rivalry with Cremonese – known colloquially as the Derby del Po – is also back amongst the fixtures.

But since 2014, the attention of Biancorossi fans has been piqued by another club even closer to home: and that team is Pro Piacenza 1919. Granted, there has never been any true sense of rivalry between the Piacenza clubs. For the majority of their history, Pro Piacenza (referred to as ‘Il Pro’ or the Rossoneri) have competed in the amateur divisions, that was until their promotion to Lega Pro in 2014. This is in stark contrast to the more succesful and established history of Piacenza Calcio 1919 (referred to as Piacenza, the Lupi or Biancorossi).

Piacenza’s museum at the Stadio Leonardo Garilli tells the story of the famous Lupi (the wolves); a club that was once home to the likes of Dario Hübner, Ruggiero Rizzitelli, Alberto Gilardino, the Inzaghi brothers and Pietro Vierchowod. Their city bedfellows, the Rossoneri, have boasted no such esteemed names.

In late November 2016, it was time for this newer brand of Italian inner city derby to be played. With it came a chance to take a trip to an often under appreciated northern destination and more crucially, discover whether any sense of rivalry actually exists between the clubs of Piacenza.

The roots of the name Piacenza stems from the Latin verb placēre, ‘to please’, and the French word plaisance; which in simple terms is said to mean a ‘pleasant abode’.

Located half way between Milan and Bologna, Piacenza sits near the River Po. Its ancient splendour can be seen in aristocratic palaces, Romanesque church spires and medieval squares. Founded in 1919, the pinnacle for Piacenza was reached in the later years of the 20th century. Specifically, 1983 is often heralded as the start of a ‘golden age’, for it was at this pivotal point that President Garilli (after whom the stadium is named) arrived.

19 July 2012 represents another landmark. Having been disbanded three weeks previous, this was the date on which the club were reborn. Local amateur club Libertaspes Calcio obtained the legal entity and branding of the former Piacenza Calcio and the story of the Lupi continued. 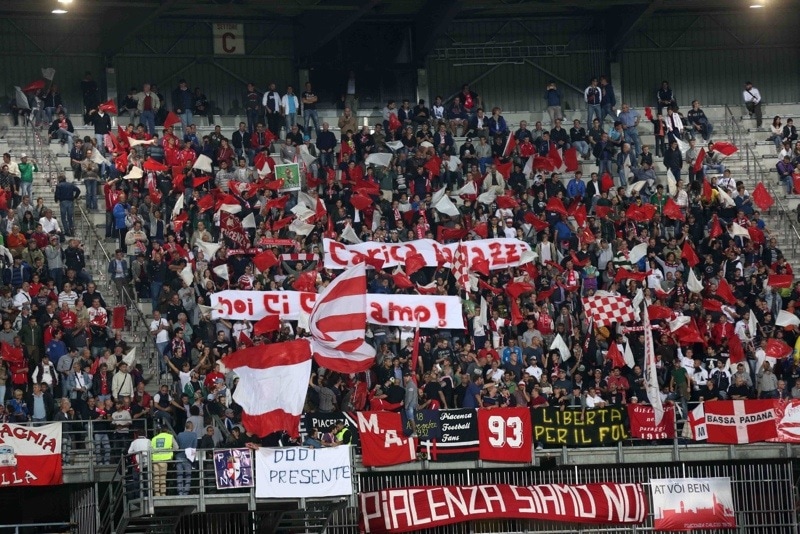 Promotion from Serie D in May 2016 saw the return of an important event in the local football calendar. The Derby del Po is a clash between Piacenza, located on the south bank of the River Po, and Cremonese from Cremona in Lombardy, located on the river’s north bank. This fixture is among a group of highly regarded stracittadine (cross-town) derbies and for many Piacenza fans, the clash remains ‘season defining’.

In contrast, the Piacenza Derby is known less for the rivalry it inspires and more for the confusion the almost identical team names create. Interested onlookers can often mistake one team for the other and vice versa.

Key turning points for ‘Il Pro’ came during the summer of 2013 as well as during the Spring of 2014.  A team name change took place – they were renamed A.S.D Pro Piacenza 1919 – and the club then gained promotion to Lega Pro.

A brisk walk through the retail outlets of Piacenza sees no sign of any Pro Piacenza memorabilia on sale. Instead, a number of tobacco shops display a selection of red and white scarves. Several other items of club merchandise are on sale but there is nothing featuring the red and black of Pro Piacenza.

On the best-known fan forum of the Lupi, the derby was being talked about in some depth come the morning of the game. One fan wrote: ‘So this weekend we play ‘Il Pro’.

As opposed to any sense of dislike or rivalry, fans of the Biancorossi display a rather dismissive tone to ‘Il Pro’. Another fan, somewhat sarcastically pointing to the recent financial turmoil, called the Piacenza derby: ‘just another step on the road to our salvation as we support the only team of this great city, ha ha’. This sentiment was echoed by another ​contributor: ‘Let the people of Piacenza cheer only for the men in red and white’.

On game day outside the Stadio Leonardo Garili, most Biancorossi supporters were clearly attempting to rally themselves for a win after suffering successive defeats. There was no sign that any of the city’s ‘bragging rights’ were at stake. Indeed, the tone amongst all local football fans in the days leading up to the derby had a ‘we could not care less’ feel.

Only on the morning of the game did the match narrative on fan forums cut a little deeper. A few chose to call the fixture a ‘fake derby’, where the chorus of chants should only be in support of the Lupi.

​Across the city divide, on the Pro Piacenza official website, the club’s President also played down the rivalry, announcing the game was ‘just a clash that is part of a title race like any other match’.

One hour before kick-off, outside the drab Leonardo Garilli stadium, the dominant colours on display were red and white despite the Lupi being the ‘away side’. There was no clash of colours so defining of a derby; no sense of anticipation and no sense of unease surrounding security.

At the open and vast stadium ticket office, the visiting fans queued and bought scarves. A few cried foul at the price of entry, but generally the tone was one of humour. One fan told me a tale about previous clashes between the two; ‘nothing to talk about here’ he stated.

Once regarded as ‘futuristic’ in appearance, the Stadio Leonardo Garilli is now better known for the distance that exists between the stands and the pitch. 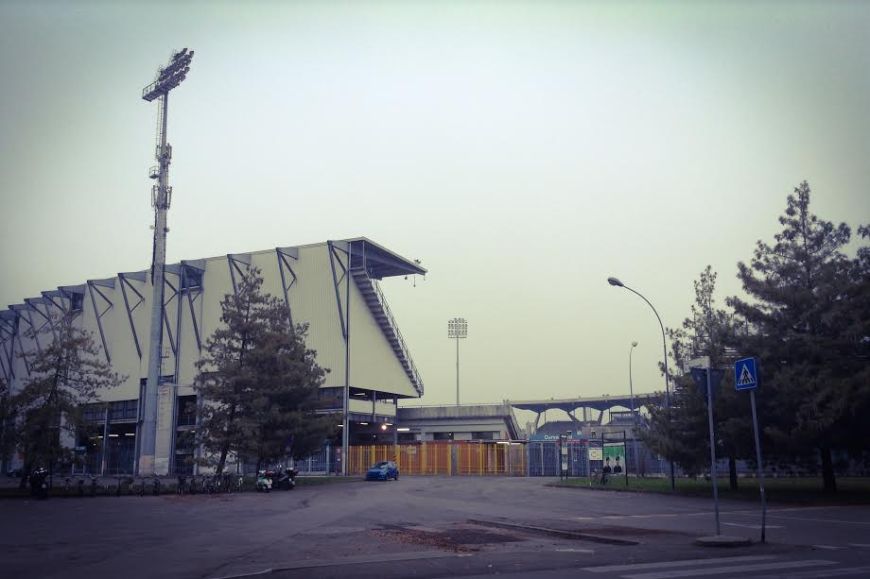 Less than 2,000 fans turned up for the derby, with the bulk of those followers sporting the historic colours of Piazenza; red and white. ‘Il Pro’, according to one fan, were ‘giving tickets away to local youths and the relatives of the players just for a support’.

Playing in unfamiliar white shirts which displayed the famous wolf logo, the  derby was decided by a solitary own-goal late in the second-half. The Lupi had triumphed over ‘Il Pro’ but in truth, it was a tousy affair with numerous bad tackles and repeated incidents of play acting. The fixture lacked any sort of cutting edge; a theme so typical of footballing derbies.

Local law makers in Piacenza currently regard ‘Il Pro’ not as a fairy tale, but instead in the words of one local politician, a ‘commendable project that has been orchestrated by professional people highly competent in football matters’.

But the presence in Lega Pro of both clubs has created a peculiar newer brand of Italian inner city derby. Teams that were not so long ago in the amateur Eccellenza (fifth tier) level, now find themselves in the third tier amongst clubs with more famous traditions such as Piacenza, Cremonese, Livorno, Reggiana and Parma. Indeed, a gaze south sees both Lupa Roma and SS Racing Club Roma playing in the third tier, bringing another (if less than intense) Rome derby to the Italian football calendar.

For the unpretentious city rulers of Piacenza, the presence of two local clubs in the third tier is bringing some sense of civic pride where not so long ago football was only a tale of survival. However, for city tax payers there have been calls for closer collaboration between the two teams, both from a business and sporting perspective.

While a ‘merger’ has not been proposed, a near-empty stadium with 21,000 seats on match-day seems nonsensical. While club directors look on with pride, for many football fans in Piacenza, the complexity of having two teams in an average sized city is a curious contradiction.

Most recent post match comments touched upon the madness of duplicate match-day operating costs; the needless splitting of much needed sponsorship money and competing youth sectors.  And, given the deserted feel of the Stadio Garilli, most Piacenza citizens believe a more unified and cooperative approach is in order.

For the loyal fans of the Biancorossi, however, talk of unity is cheap. After all, they still harbour hopes that Piacenza Calcio 1919 will someday return to compete in the heady heights of Serie A, just as they did during the early 2000s.