The idea that Italian football is all about defending is a well-worn cliché. Any regular viewer of contemporary calcio will tell you that this is no longer the case – that the game has evolved and become an attacking spectacle as much as an exhibition of defensive prowess. However, the stereotype persists.

Indeed, the etymology of the word stereotype – derived from the Greek steros (meaning firm and solid) and typos (meaning impression) – suggests there is a degree of legitimacy behind such ‘stereotypical’ assumptions.

Thus, the notion that Italians excel at defending may be trite, but it certainly contains more than a grain of truth. Football history tells us that many of the game’s greatest defenders were Italian. Franco Baresi, Alessandro Nesta, Gaetano Scirea, Giacinto Facchetti and Ballon D’Or winner Fabio Cannavaro are just some of the names that spring to mind.

In fact, so enshrined is the art of Italian defending that one of its most famous tactical disciplines, catenaccio (literally ‘door-bolt’), became part of the global footballing lexicon. AC Milan legend Paolo Maldini summed up the Italian attitude to defending succinctly when he said “If I have to make a tackle, then I have already made a mistake.”

During his near quarter-century career at Milan, Maldini featured in some of the most lauded defences in history. Along with the aforementioned Baresi, he played alongside Mauro Tassotti in the mighty Rossoneri side of the 1980s and early 90s, led first by Arrigo Sacchi and then by Fabio Capello. But one can’t talk about the likes of Maldini, Tassotti and Baresi without instantly mentioning the fourth member of the Diavolo’s formidable defensive quartet; the unforgettable Alessandro Costacurta.

Nicknamed “Billy”, primarily due to his skills as a basketball player (the local Milan basketball team carried the same nickname), Costacurta graduated to the Rossoneri first team in 1985. This followed a six-year spell in the Milan Primavera, where he had gained a reputation as a versatile, if not overly skillful defender. During his youth, he had a particularly slight physique and this made him extremely mobile. Combined with his notable tackling ability and skill at distributing the ball in a variety of ways, Billy was an ideal candidate to occupy positions across the back four. Though he would primarily become known as a central defender, he often played in either of the full back positions or as a libero, tidying up loose balls and marking runners who had managed to penetrate the main defensive line. 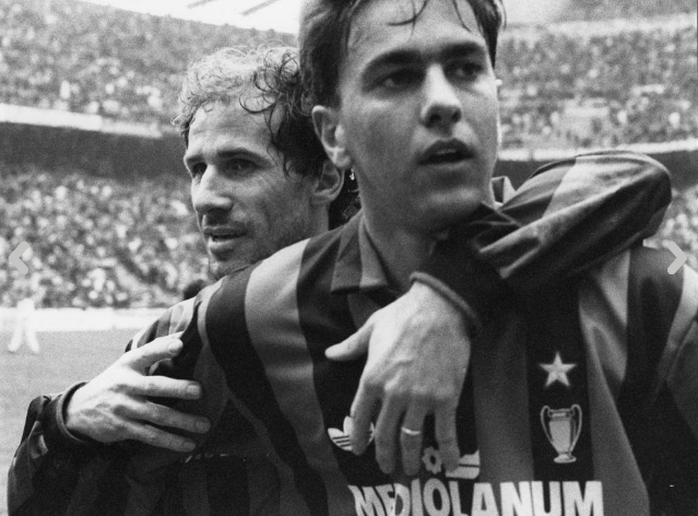 Costacurta’s emergence from the youth academy followed one of the darkest periods in Milan’s history. Despite winning their tenth Scudetto in 1978-79 under Nills Liedholm, the Rossoneri went on to be relegated in the summer of 1980 after being implicated in the Totonero match-fixing scandal. A year later, Milan returned to Serie A, only to be relegated again in 1982. These years in Serie B were the nadir of a barren spell that saw the Diavolo go almost a decade without a major trophy.

Costacurta did not make a single appearance for Milan in his first season in the senior squad, and was forced to wait until the 1986-87 campaign to make his debut in a Coppa Italia tie. He did so at an exciting time. In February 1986, following years of struggle, the club was acquired by Milanese media magnate Silvio Berlusconi. The new owner set about bringing immediate stability and success, recruiting head-coach Sacchi, as well as the Dutch triumvirate of Marco Van Basten, Ruud Gullit and Frank Rijkaard. No one, including a young Costacurta, could have foreseen what was to come. The changes signalled the beginning of a golden era for Red and Blacks – and served as the foundations for the creation of one of world football’s most iconic teams.

Costacurta, however, had to be patient. Despite two appearances in the Coppa Italia, the young defender was sent on loan to the then Serie C side Monza for the remainder of the 1986-87 season. Whilst there, he gained invaluable first team experience, making 30 appearances before returning to the Stadio Giuseppe Meazza. This time, Milan remained his home for the next 20 years.

Recruited from the then Serie B side Parma, Sacchi arrived at Milan with the intention of implementing wholesale changes to their style of play. Much of this focused on a high intensity pressing game, which required the defence to be mobile and alert, maintaining a high-line and closing down space wherever possible. Costacurta and his defensive teammates were put through their paces in those early days. Maldini, who was only 19 at the time of Sacchi’s arrival, later told FourFourTwo; “It was intense. I used to get home at night feeling exhausted. Everything was really difficult.”

Costacurta, along with Maldini, Baresi, Tassotti and goalkeeper Giovanni Galli, were dubbed ‘Sacchi’s five’. In Sacchi’s training sessions, an attacking team of 10 players would be tasked with scoring a goal within 15 minutes against the five-piece defence. If the attackers lost the ball, they had to restart the exercise 10 metres within their own half. The benefits of such a drill were two-fold. The talented attacking side – which included the aforementioned Dutch trio as well as players like Carlo Ancelotti and Roberto Donadoni – honed their ability to quickly and efficiently break-down a well-organised defence. Meanwhile, the defensive quintet learnt to cope when outnumbered by what was perhaps the greatest attacking line-up in world football at the time.

It was unlikely Costacurta and his colleagues would experience anything more testing than that which they encountered in training every week. This gave the whole team a confidence born out of total trust in the methods of their coach and the philosophy he was implementing.

Following his Serie A debut against Hellas Verona in October of 1987, Costacurta essentially enjoyed an uninterrupted run in the first team for the next two decades. He became renowned for his physical prowess and immeasurable tactical intelligence, which often allowed him to read the game faster than the attackers he was tasked with marking. Despite his undeniable ball-winning ability, Costacurta held the same belief as his teammate Maldini; the tackle was the byproduct of a mistake and used only as a desperate measure.

Costacurta’s time in the first team began as it would continue for the majority of his career; littered with trophies. By the end of 1990, the defender had played two full seasons in the senior side and already won a Serie A title, two European Cups, two European Supercups and two Intercontinental Cups. Perhaps the most notable of these victories was a 1-0 aggregate win in the 1989 European Super Cup over Johan Cruyff’s famous Barcelona Dream team. Costacurta and his teammates kept clean sheets in both legs, frustrating a Barca side that boasted the likes of Michael Laudrup and Guillermo Amor.

Under Sacchi’s successor, Billy continued to be a mainstay in the Milanese defence. In an intense and extremely successful five-year spell under Capello’s leadership, Costacurta won three consecutive Scudetti between 1992 and 1994, another title in 1996 and yet another European Cup in 1994. By the age of 30, Costacurta had a trophy haul the envy of any footballer. More than that, he had been an integral part in each of these successes.

However, in keeping with the cyclical nature of football, Milan’s fortunes dipped after Capello’s departure. Key players retired, including defensive stalwart Baresi, and this led to the disintegration of that domineering Milan side. But throughout this period of instability, Costacurta remained a constant and was awarded the vice-captaincy behind Maldini. Despite numerous coaching changes, he helped the team secure another Scudetto in 1999; Costacurta’s sixth and the club’s sixteenth.

By the turn of the millennium, Costacurta was 34 and the best years of his career appeared to be behind him. Billy, however, was one of the beneficiaries of the famed ‘Milan Lab’, responsible for prolonging the careers of numerous players. Pioneered by the celebrated chiropractor Jean-Pierre Meersseman, the lab focused on using scientific advances to resolve long-standing injury problems and reduce risk of re-occurrence for players in their advancing years.

“You can drive a car without a dashboard, without any information, and that’s what’s happening in football,” Meersseman famously remarked, “There are excellent drivers, excellent cars, but if you have your dashboard, it makes it just a little bit easier.”

The Lab was introduced around the same time Carlo Ancelotti was appointed as Milan coach and this saw the club return to Europe’s top table. Costacurta would help usher in a new generation of Milan legends, driving the club forward with the likes of Clarence Seedorf, Filippo Inzaghi, Kaka and Andriy Shevchenko. He won one more Scudetto in 2004 and incredibly, another two European Cups in 2003 and 2007. The latter proved a fitting swansong, as Costacurta finally called time on a glorious 20 years with the Rossoneri. At the time of his retirement in 2007, he was the oldest player to take to the field in Serie A, aged 41.​

With 458 appearances to his name, ‘Billy’ was part of an unrivalled generation of Red and Black Bandiere (club icons), alongside Maldini and Baresi. Andrea Pirlo, who had arrived at the Diavolo during the club’s second period of success, spoke particularly highly of Costacurta’s influence at the club. In his autobiography, I Think, Therefore I Play, the Italian midfielder said; “Billy Costacurta is another man I have a great relationship with.  He and Paolo [Maldini] were a dual reference point for everyone at Milan, whatever the situation.”

Costacurta’s club career remains one of the most decorated in football history. Unfortunately, his international career did not allow him to reach similar heights. After making his debut for the Azzurri in November 1991, he earned 59 caps and remained an ever-present in the Italy defence for the majority of the following decade. But despite playing in some highly talented national sides, the honours evaded Costacurta and his compatriots, most excruciatingly in the final of the 1994 World Cup, where Billy (missing through suspension) watched on as Roberto Baggio suffered the cruellest twist of fate.

Nonetheless, Alessandro Costacurta is undoubtedly one of the greatest defenders in Milan and Italy history. He helped bring success to the club he remained loyal to for 20 years, and often he did so in circumstances that may have prompted other players to retire. His consistency and unwavering maintenance of high standards allowed him to endure and thrive, collecting a medal haul that his considerable ability merited.

He may not be the first of the stereotypical great Italian defenders that springs to mind, but he should be no less renowned. Ask any Milan fan and they will agree – he was one quarter of the greatest defence in their history and for that, Billy Costacurta’s legacy is indelible.