“My greatest ever goal? The left-footed volley against Sampdoria,” Francesco Totti told The New York Times recently. In an extraordinary career that has stretched over three different decades and with the sheer volume of brilliant goals he’s embedded into the very fabric of calcio, for the man himself to narrow his goals down to one speaks wonders for the brilliance of his personal favourite.

Totti is a polarising figure in the English media. It has taken him the better part of his career to gain respect from English journalists. Before Zlatan Ibrahimovic sauntered into our lives, it was Totti who wore the ‘overrated’ crown in the earliest part of the 21st century. Viewed as a ‘luxury’ player in England, he was regularly in the firing line of Sky Sports pundits – those beacons of knowledge on the European game of course – for not pulling his weight or for the classic ‘if he was good enough he would have moved on’ line that was trotted out at least once a season. These views down the years have conditioned football fans en masse to believe Totti isn’t what most of his teammates and regular viewers of Serie A acknowledged long ago; the born and bred Roman is a genius and one of the last of his kind, a true bandiera.

In the autumn of 2006, Totti had just turned 30, and even at that stage seemed to have been around forever. He decided to retire from the Azzurri following World cup glory in Berlin, figuring – quite rightly – that life on the international scene would never get better than winning gold. Injuries were also becoming more frequent, including a nasty fracture of his foot in the months leading up to the World Cup. The local boy wanted to devote his efforts entirely to the team of his heart.

Click to read ‘Last Man Standing: The Fading Remainder of the ‘Bandiera’

Roma were in their second season under the tutelage of Luciano Spalletti, and were considered amongst the favourites for the Serie A crown following the seismic events that occurred during the summer of 2006, which plunged the Italian game into a state of crisis.

Roma were not involved in the events that became known around the world as Calciopoli. Roma initially ended the 2005-06 season in 5th place, however following the Calciopoli trial and the subsequent demotion of Juventus and the reshuffling of the league positions, Roma finished second and therefore qualified for the Champions League.

With Juventus in Serie B and Milan and Fiorentina facing point deductions, the title race essentially boiled down to Inter and Roma. The two went into battle early on in the season, with Inter winning at the Stadio Olimpico thanks to a superb Hernàn Crespo effort. The Nerazzurri became runaway leaders and Roma struggled to keep up with their star-studded line up.

Roma’s season was characterised by a lack of consistency. One week would produce outstanding results, such as the 7 – 0 pasting they gave Catania or the 4 – 0 away win at Parma, but the following week would see them crash back down to earth with limp displays against Ascoli and Chievo. However, when they clicked, they were scintillating to watch, crafting some of the best football on the continent. The signing of the hugely underrated David Pizarro from Inter the previous summer added further poise and finesse; the Chilean perfectly complimenting the tenacious Daniele De Rossi in the centre of midfield.

In November, Roma travelled to Genoa to face Sampdoria, having scored twelve goals in their previous three games in what was their best streak of form of the season. Totti and co. had dispatched Fiorentina 3 – 1 and followed that up with a 2-1 away win to that seasons’ Champions League winners AC Milan, both goals coming from ll Capitano. Then came the aforementioned seven-goal demolition job of Catania.

In Genoa, Totti had netted earlier in the game, rifling home a through ball from De Rossi, before Sampdoria equalised a minute later. Roma then regained their composure and raced into a two-goal lead thanks to strikes from Simone Perrotta and Christian Panucci. The fourth goal however, and Totti’s second, was the only goal anyone was talking about after the full-time whistle.

In the 73rd minute, Marco Cassetti found himself in central midfield, some 30 meters from the opposition goal as a Roma corner broke down. The right back took one touch to control the ball with his left foot, took another to push the ball forward with his right, looked up and saw Totti loitering on the edge of the Sampdoria penalty box down on the left-hand side. Cassetti then chipped the ball in the direction of the number 10.

Most other players when presented with this situation would presumably control the high ball with their chest or let it drop to their feet and look to cross the ball into the box for a teammate, or as is usually the case, pass the ball backwards to a midfielder or left back. However, Francesco Totti didn’t – and still doesn’t – consume normal air like ordinary mortals; he operates in that rarefied zone that only allows true visionaries to enter.

The ball, floating towards the byline, was met by Totti, just inside the penalty box, jogging almost nonchalantly. His eyes firmly on the flight of the ball. As the ball dropped from the sky he hit an exquisite volley, perfectly catching the ball on the front of his foot and adding just the perfect amount of curl with his toes. Gianluca Berti was helpless in the Sampdoria goal as Totti’s volley flashed across him and arrowed into his left-hand corner like a laser. The goalkeeper barely had time to blink let alone save the ball. 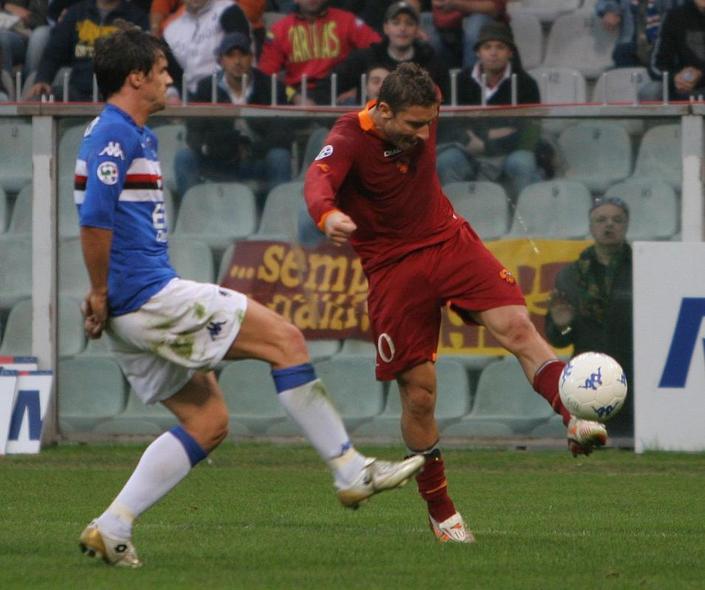 Totti’s majestic volley against Sampdoria remains one of the most iconic strikes in Serie A history.

​“A splendid goal by Francesco Totti!!” the commentator repeated continuously as a hush enveloped the Luigi Ferraris. Then, as the moment started to sink in, the Sampdoria fans, knowing they had witnessed something truly special, began to collectively applaud. “It showcased all of my best characteristics,” Totti said of the goal. It was technical ability par excellence. The execution was flawless.

Totti would have his most prolific season in 2006-07, bagging 26 Serie A goals, 32 in all competitions, and winning the European Golden Shoe award ahead of Ruud van Nistelrooy. It was in this season that Spalletti – robbed of all available strikers due to injury – famously pioneered the 4-6-0 formation, with Totti being the original ‘false nine’ half a decade before Vicente del Bosque would implement the system for Spain at Euro 2012.

While Totti was still very mobile in 2007, he wasn’t the nimble left-winger once utilised during the Zdenêk Zeman era at Roma. However, his quickness of thought and vision was amongst the finest in the game and Spalletti used this to great effect; with the more athletic trio of Simone Perrotta, Rodrigo Taddei and Mancini all attacking from deep and wide areas, latching on to beautifully weighted through balls from Er Purpone. Between the three, they scored 33 goals in all competitions in 2006-07.

Roma would finish second behind Inter, by some 22 points, but fans of the Italian game who can recall that season will no doubt argue that whilst very inconsistent – a flaw that blighted the initial Spalletti reign – when everything came together, his Giallorossi were a thing of beauty.

And as for Francesco Totti, what is there really left to say? Enjoy him while you still can is my only advice.​

Emmet is a freelance football writer based in Italy. As well as The Gentleman Ultra, he has written for FourFourTwo, These Football Times and InBedWithMaradona.