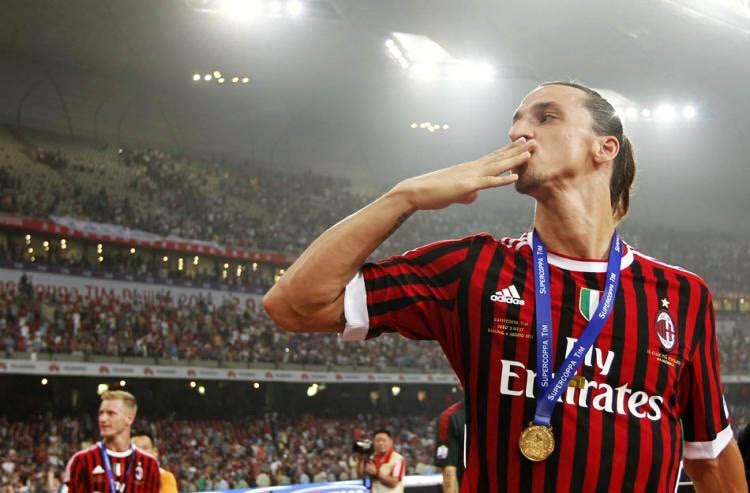 “You bought a Ferrari, but you drive it like a Fiat.” (Zlatan on Pep Guardiola’s treatment of him during his time at Barcelona).

Zlatan’s Catalan journey was anything but the dream he envisioned. Pep Guardiola’s near-perfect dynasty yielded few blemishes at Barcelona, yet it’s hard to imagine his mismanagement of the ‘Big Swede’ as anything but a scar.

The former Inter man’s assertive persona amongst a low-profile cast saw him labelled the “black sheep” by the Spanish media. Soon, Guardiola and Ibra wandered off on vastly different wavelengths, and in the end, their rapidly decaying relationship deteriorated beyond repair. While the Swede showed no signs of struggling – registering 22 goals and 14 assists in his lone season with Barca – agent Mino Raiola surveyed the market for his biggest client.

A switch to Real Madrid, his preferred destination, was off limits. Sandro Rosell, Barcelona’s newly appointed president, was in a bind, and with David Villa on his way from Valencia, the Blaugrana attack was over-crowded. Despite very few clubs having the capability to finance such a move, Raiola doctored a plan to bring Zlatan back to his old stomping grounds.

On 26 August 2010, an exhibition match between AC Milan and Barcelona took place at Camp Nou. Adriano Galliani, one of football’s toughest negotiators, declared he would not depart Spain without Ibrahimovic. Several Rossoneri campaigned in support of signing the Swede and the pressure rested on Galliani to deliver. Desperate to acquire a winning player, the Milan CEO coerced Barcelona into a discount.

A deal was reached with the Diavolo. Undertaking a massive pay-cut, Zlatan Ibrahimovic joined Milan on a free loan, with an option to buy at €20 million. Milan’s coup was another case of Galliani’s shrewd business mentality. Instantly, with the stroke of a pen, Zlatan’s tenacity returned to the city of Milan, richly benefitting the Italian giants for the ensuing Serie A campaign.

Arriving in Milan, chaos reigned as screaming fans welcomed their newest star on the tarmac. Cries of “Ibra! Ibra!” filled their lungs, hopeful that this marquee signing could break the recent dominance of their city-rivals. Over the last half-decade, Inter had maintained all bragging rights in the city, lifting five league titles, and one historic treble under Jose Mourinho.

AC Milan sat in a difficult spot, yet the prospect of delivering the club’s 18th Scudetto, after seven years of failed attempts, became Ibrahimovic’s promise to all who shared a Rossonero persuasion.

Massimiliano Allegri, formerly of Cagliari, had a championship-winning side; a well-balanced blend of veterans and youth. Rounding out the ‘old’ Rossoneri guard, Allegri employed the tenacious Gennaro Gattuso, Pippo Inzaghi, Clarence Seedorf, captain Massimo Ambrosini, midfield technician Andrea Pirlo, masterful defensive pairing Gianluca Zambrotta and Alessandro Nesta, and two-time Ballon d’Or winner Ronaldinho. There was no shortage of fortitude and spirit. Complimenting this seasoned structure were Brazilians Alexandre Pato, Thiago Silva and Robinho, who arrived on Deadline Day from Manchester City. This was a well-oiled engine. All Ibrahimovic had to do was drive it home. 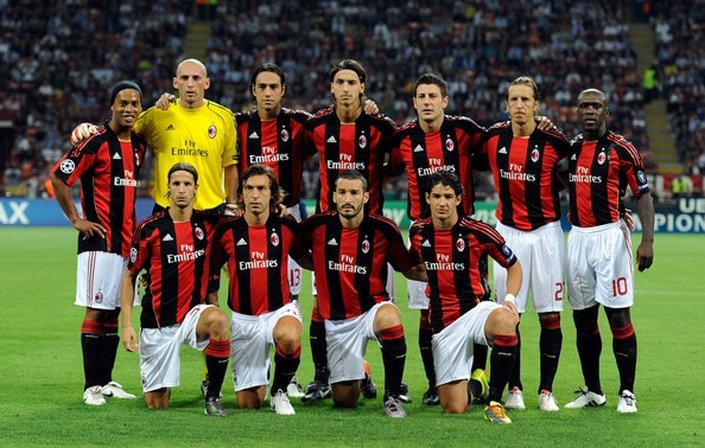 On 29 August 2010, AC Milan opened the 2010-11 campaign in the friendly confines of San Siro, entertaining Lecce. As Zlatan awaited league approval over pending paperwork, the home crowd warmly welcomed him at the break. A capacity-crowd roared as Zlatan took center stage at the halfway line. Italy treats its footballers like gods, and this holds especially true at AC Milan, tantamount with tradition, success and a winning culture. Ibrahimovic now wore the weight of hopes and dreams; the man bought to usher in a new era of glory.

Once again, Ibra took it upon himself to be the leader this team required. But despite being a notoriously fast starter, Zlatan’s debut was anything but grand. On 11 September against Cesena, he missed a penalty and the Rossoneri lost 2-0. Days later however, his Champions League chapter in a red and black shirt opened with quite the premier.

Partnered with Pato, and Ronadinho as the auxiliary striker, Ibrahimovic pounced on the opportunity for redemption, scoring two goals in 2-0 victory over Auxerre. Domestically, Zlatan would soon get off the ‘schneid’, grabbing his first club goal at the Stadio Olimpico against Lazio. But four matches and only five points saw Milan looking up at Inter in the table. Months later, however, under the bright lights of the San Siro, Ibrahimovic would leave no stones unturned against his former club.

In the 4th minute, Ibrahimovic charged up the pitch into the penalty area. Tailed by Lucio and Marco Materazzi, Zlatan lured the pair into a risky challenge with an elusive maneuver, drawing a penalty in the process. Laser pointers beaming down from the Curva Nord, Ibrahimovic picked his spot and buried the match-winning penalty. Shortly after, Milan’s fortunes would turn and they began ascending up the league table.

Ibrahimovic, a profoundly hard-working individual, is no stranger to dust-ups and physical battles. That’s partially due to his rigorous regime of treating training sessions with his teammates as though he’s locked in a heated derby. The Balkan-born’s hardnosed, workhorse transformation can be attributed to Fabio Capello’s rigid coaching methodology at Juventus. At Milanello, the club’s training ground just an hour outside of the city-centre, American defender Oguchi Onyewu felt his wrath, receiving a head-butt in a scuffle during practice. Luckily, the mix-up did not divide the changing room and from there, Milan soared.

In the midst of the title chase, Ibrahimovic’s dreams of the ever-elusive Champions League trophy filled his headspace. AC Milan, seven-time winners, held a pedigree in Europe few could surpass, except Real Madrid – 10 time champions at that time. The Rossoneri topped their group, advancing to the round of 16. But Allegri’s side drew Tottenham in the knockout stages and crashed out 1-0 on aggregate. Once again, the big striker’s dreams of European glory were quashed, but the hunger remained for domestic dominance. As Milan entered the last leg of the season, the Serie A title was theirs to lose. All it would take is a single point against Roma at the Olimpico and Milan would be crowned champions of Italy.

Playing inside Rome’s football coliseum is a daunting task for any club, big or small. Travelling supporters showed up in large numbers that spring evening, hoping to witness a shift in power. From the opening whistle, plenty of chances from Robinho and Ghanaian Kevin-Prince Boateng – a great beneficiary of Ibrahimovic’s exploits – missed the mark. Perched in their seats, Milanisti nerves and anxiety had long taken hold. All they wanted to hear was the final whistle. Five additional minutes, an eternity in most cases, ticked away and the 0-0 result secured the Scudetto.

Visiting supporters trekked to Rome and displayed their brightest smiles. Red and black colours dominated the night sky, as supporters raised their scarves in triumph. It was that kind of evening for the Milanese outfit. In the aftermath of the match, Ibrahimovic – the prankster of the squad – delivered a swift karate kick to Antonio Cassano’s head while the Italian was speaking to the press. It was a move befitting of the Swede’s playing style and persona.

​Cassano – one of Milan’s winter signings – and Ibrahimovic roamed parallel paths on the way to professional football. Corky and full of impracticality, the two uniquely enjoyed each other’s vibrant personalities, even when others did not. Sharing laughter and joy, the title celebrations commenced.

Zlatan’s Italian renaissance had continued. He finished his debut season with Milan with 14 goals and 12 assists. Meanwhile, the team’s success prompted mass euphoria back in Milan’s Piazza del Duomo, before the entire squad took their place atop the winner’s podium to claim numero diciotto.

The high of the previous campaign’s achievements spurred talk over a possible treble run for the 2011-12 campaign. In early August, Beijing would set the stage for the Italian Super Cup; a Milan Derby. Wesley Sneijder’s early strike was cancelled out by Ibrahimovic and Boateng, whose goals saw the Rossoneri hoist another piece of silverware. The season had much potential and Milan seemed to be in pole position for a repeat, whilst Ibrahimovic continued his reign in Italy, topping the scoring charts with 28 goals.

However, fate was against Zlatan and the Rossoneri. Late in the season, a controversial “ghost goal” against Juventus, now known as “il Gol di Muntari”, thwarted hopes of winning the league. Juventus, coached by the irrepressible Antonio Conte, overthrew Allegri’s side and finished off an undefeated season as the new champions of Italy.

That summer, an era would come to an end, as several of Milan’s long-serving legends left the club, either retiring or exploring new challenges. Financially, they struggled to sustain their business model. In an attempt to balance the accounts, Silvio Berlusconi sold his two biggest assets in Zlatan Ibrahimovic and Thiago Silva to Paris Saint-Germain for a combined fee of €60 million. From that point onward, Milan slipped into a malaise and to this day, continue to struggle to reclaim their position amongst Europe’s elite.

Three clubs. Two cities. One love affair. Although his tenures were never made permanent, Zlatan succeeded in carving his name into the hearts of calcio romantics. He was a titan on and off the pitch. Every word was backed up by a statement in the name of goals and silverware. Italy was more than his trampoline to stardom, it was the foundations upon which his rise to the pinnacle of European football was built.

‘Matthew is an Italian football writer who co-founded the blog, Milan Brothers. He is also an editor and columnist at Italian Football Daily.’