​In the modern age, England’s Premier League enjoys a truly global reputation. There are few corners on the planet where its games are not watched or its teams not followed. It’s reflected in the playing staff of the league too – a Sporting Intelligence report in 2012 found that 244 players represented an incredible 51 countries across the 20 teams in the league. Only 34 per cent of the players were English natives.

It wasn’t always that way though. Only two decades previously, at the time of the conception of the Premier League as we know it, it was very much an English league. A considerable majority of players were from the British Isles and those brought in from far flung foreign lands were seen as an exotic luxury.

That all began to change as the modern Premier League age took hold. By the mid-1990s, money was being pumped in via sponsorships and TV deals. The reach of the league was ever-expanding. In a direct reflection of the eclectic international audience that now watched England’s best teams, players from all over the world were being attracted to play there. The fast-paced and physical nature of the game in England was seen as one of the most exciting brands of football in the world at the time, and people wanted to be a part of it.

The change towards a more continental game was particularly visible in west London. A Chelsea side, financed by businessman Ken Bates, was slowly finding sure footing back in the top flight, having struggled in the previous decade. Their lowest point had come at the end of the 1980s, when they were relegated to the second tier. By the summer of 1996, their transition to a multicultural phenomenon was truly under way.

Manager Glenn Hoddle had recruited Dutch legend Ruud Gullit and talented Romanian full-back Dan Petrescu to his ranks 12 months earlier. Even Welsh-born striker Mark Hughes, who signed around the same time, had a distinctly international flavour, having spent so many years playing in mainland Europe with giants FC Barcelona and FC Bayern München. An 11th-place finish and an appearance in the FA Cup semi-final in April of 1996 ensured that, even as Hoddle left to take up the England manager’s job, Chelsea had begun a journey that would see their mentality and identity as a club change forever.

Gullit replaced Hoddle at the helm and continued the club’s practice of bringing in some of the top talents from across the world. French defender Frank Leboeuf, Italian striker and Champions League winner Gianluca Vialli, plus compatriot Roberto Di Matteo of Lazio, made the move to London. While they would all go on to spearhead a time of monumental change for the Blues, it was the acquisition of one particular little Italian in November of 1996 that would truly change the course of the club for good.

‘Chelsea Set to Add Zola to Their Italian Set’ was the headline in the Telegraph that winter.  The paper confirmed that diminutive playmaker Gianfranco Zola would soon make the switch from then-giants Parma to Chelsea, for the princely sum of £4.5 million, a near-record fee for the club at the time.

Many in England were underwhelmed by the player’s arrival, however, given the reputation he had garnered for himself in Britain before making the transfer. Up until then, Zola was primarily known to English football fans for two forgettable events, both occurring while he wore the blue of his national side. The first was his famously inexplicable sending off against Nigeria at the World Cup in 1994, which saw him drop to his knees and cradle himself as he saw his World Cup dream disappear.

He would never play for his country on that stage again.  The second event, taking place at Euro ’96, in the country he was now going to call home, saw the Sardinian native miss a penalty in a game against Germany. Had the Azzurri won the match, they would have qualified for the tournament’s quarter-finals. It wasn’t to be, however, and with Zola’s transfer to Chelsea occurring only 6 months later, was fresh in the minds of those in England. The former Napoli player, a student under the great Diego Maradona, would have much to do to convince those in his new home that he was anything special.

In a time when squad numbers beyond the standard 1 to 11 were still a novelty, Zola was handed the number 25. Emblazoned, along with his name, on the back of a shirt that was so big it made him look like a kid wearing his dad’s kit, it would go on to become one of the most iconic images of the Premier League era. Beginning with his debut away from home against Blackburn Rovers, the 25 billowed as Zola zigzagged through the Rovers defence. “I thought he might get knocked about a bit,” Newcastle United player Rob Lee later told ESPN, owing to Zola’s small stature.

But as Blackburn’s players, and many in the weeks to follow would find, it was that very stature that gave the Italian the low centre of gravity that would prove him immensely difficult to barge off the ball. The Premier League wasn’t used to someone with the close control Zola possessed and, combined with his ability to sharply change direction at pace, defenders found it increasingly difficult to successfully rob him of possession. 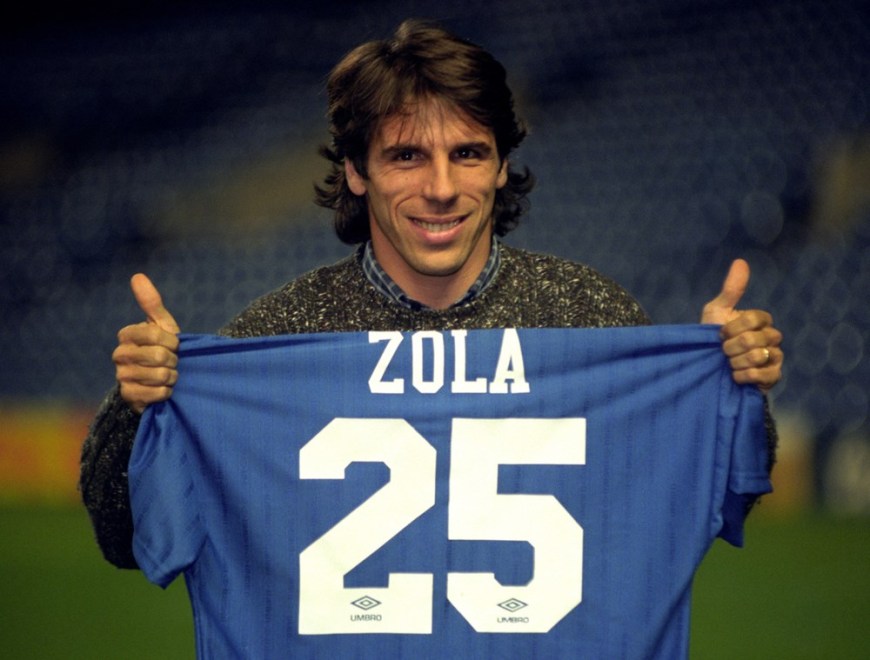 The number 25 shirt has since been retired at Chelsea, such was Zola’s influence

No more evident was Zola’s skill than in a game against Manchester United in February of 1997. Chelsea were hosting reigning champions United at home and everyone of a blue persuasion knew it would take something special to beat the Red Devils. Zola duly supplied the necessary touch of magic. Running on to a pass from team-mate Petrescu, he flicked the ball behind his standing leg, leaving Irish defender Dennis Irwin sliding off the pitch and out of play. A quick roll of his foot over the ball allowed the Italian to tease United stopper Gary Pallister without letting him near, before Zola drilled the ball home at the near post, past Danish giant Peter Schmeichel in goal. Chelsea earned a 1-1 draw as a result and Zola’s moment of genius saw him dubbed a ‘clever little so-and-so’ by United manager Sir Alex Ferguson. It was perhaps more restrained language than the Scot used on the sideline at the time the goal was scored but, nevertheless, it aptly summed up Zola and his impact in his first season in England.

Over the following six seasons, Zola would help to propel Chelsea towards the most successful era in their history. Joined by World Cup winners Didier Deschamps and Marcel Desailly, as well lesser known talents such as Gustavo Poyet, the playmaker wowed crowds all over England and throughout Europe. In a time before it even existed, Zola was the ultimate YouTube footballer, providing moments of brilliance that would help form the basis on which the Premier League continued to grow, marketing itself as ‘the most exciting league in the world’.

He would help Chelsea make history by leading them to their second European trophy. Having previously won the Cup Winners’ Cup in 1971, Chelsea, led by their diminutive Italian, secured the trophy for a second time in 1998. Zola scored the decisive goal in a 1-0 win over Stuttgart in the final. Two months later, they would again triumph on the European stage, beating Spanish giants Real Madrid 1-0 to capture their first ever European Super Cup.  It would be Zola’s second, however – he had won his first five years earlier at Parma.

Two FA Cups and one League Cup would mean Zola triumphed domestically during his stay in London too. But it was perhaps what happened in the league during his time with the Blues that set up what would be a lasting legacy. Chelsea had won only one top-flight title in their history, in 1955, before Zola arrived. With his trickery and ability to bamboozle Premier League defences, Chelsea were able to establish themselves as a permanent fixture in the upper reaches of the league. In Zola’s seven seasons in England, Chelsea didn’t finish outside the top six once, achieving a third-place finish in 1999. Opposition managers seemed unable to pin Franco down or control his impact on games, with many being unsure exactly what position he occupied on the field or which was his favoured foot.

But Zola was so much more than a luxury player. Though he could provide individual moments of magic that changed games, he was an integral part of a unit at Chelsea that worked cohesively, a team often performing above expectations and beyond the sum of its parts. Poyet, reflecting on later years on his time playing with the Italian, said: “The best I ever played with, no doubt. I used to marvel at him in training each day. Gianfranco made you a better player: he knew what I was going to do before I’d even thought of it.”

That was what was so special about Zola. So often, a player with such high levels of technique and ability finds it hard to ingratiate themselves in a team. That was not the case with Franco. His ability made those around him better and, by virtue of playing with him, their own game was improved. Poyet’s words are testament to exactly that.

In fact, for some team-mates at the club, it wasn’t Zola’s ability on the pitch, but his personality off it, that left a lasting legacy at Stamford Bridge. “For me, it wasn’t how he was as a footballer, it was how he was as a person,” said Michael Duberry, talking to Sky Sports on the 20th anniversary of Zola’s signing.

“Ruud Gullit used to make the young English players go out before training and do a skills circuit. We saw it as a bit of a punishment. That’s how it was seen. Frank Leboeuf didn’t do it. A lot of them didn’t do it. But Gianfranco then came out with us. It just made us feel like it wasn’t a punishment anymore. It was something that would benefit us. It was such a great gesture. Rather than sitting in the dressing room saying, ‘Let them go out and do it’, he took the time to help the young lads. Those gestures were massive and what made him so great. I remember them to this day and I’m 41 now.”

What made Gianfranco Zola stand out was more than simply his exceptional footballing ability. For Chelsea fans and fans of the English game, he embodied a change in attitudes at a time of great growth for the game in that country. He was the kind of footballer that was almost other-worldly, able to produce moments of pure magic. He was a symbol of the pure joy of football in a cynical world and has gone down as one of the most fondly remembered players in English football history.

Former team-mate Duberry sums up Zola’s impact at Chelsea impeccably in the same interview with Sky Sports. “He’s the best player I’ve ever played with, bar none. He was small in stature, but as a man, he was a giant.”

​Laura has had a long love affair with Calcio that began thanks to a certain Gabriel Batistuta.  Whether it’s a match to decide the Scudetto or a battle at the other end of the table, she can be found on her couch most weekends taking in the wonders of Italian football.