Located in the far north-east of Scotland, the city of Aberdeen has many famous sons. Amongst them are the poet Lord Byron, but perhaps its most famous birth-son was a former Torino player.

In the summer of 1961, the Manchester City frontman and native Aberdonian, Denis Law, moved to Torino for a then mammoth fee of £110,000. He would play in a Granata team alongside the great Enzo Bearzot and the future England striker Joe Baker, who had signed for the Italians at the same time from Hibernian.In Turin, Law found life on and off the field incredibly tough, especially during the pre-season period where disciplined training took place in the Alps. He and Baker would spend weeks locked up in a hotel preparing for the coming 1961-62 Italian season.  When the season did start, Law quickly encountered the catenaccio system of defending leaving him few chances to score and having to cope each match against snarling Italian defenders. Despite the rough treatment, he managed 10 goals, bringing him to the attention of Juventus and being voted the top foreign player in Italy.

Though Law would return to British shores after just one season, he left an indelible impression in Turin. But the real purpose behind telling Law’s story was to highlight the link between Torino and the city of Aberdeen.

Years after Law left Turin, another dimension was added to this Italo-Scottish connection during the 1993-94 version of the UEFA European Cup Winners Cup. This edition was eventually won by Arsenal, who had knocked Torino out of the competition in the quarter-finals, before beating Parma in the final in Copenhagen.

But the early rounds of the Cup Winners Cup had witnessed a second Round clash between the team from Law’s birthplace – Aberdeen FC and Torino. It was only the second time Aberdeen had faced an Italian team in European competition and the fixture turned out to be something of a classic.

The Torino of the late 1980s’ and early 90s’ were a strange side. Despite the anticipation of a move to the newly created Stadio Delle Alpi, at the end of the 1980s’, the Granata were relegated to Serie B for only the second time in their history.  But with the arrival of former player Emiliano Mondonico in 1990 as head coach, the team began the climb back once again.

The 1990-91 Serie A season saw Torino finish in a credible fifth position, guaranteeing qualification for UEFA Cup football. This achievement was even more remarkable as it put Torino ahead of Juventus, who had failed to qualify for European football for the first time in 28 years.

Under the guidance of the moustachioed Mondonico, the run to the final of the 1992 UEFA Cup final had been seemingly unstoppable. The likes of Real Madrid and Liverpool were defeated during their progression to a controversial two-legged final against Ajax. With the tall and powerful Casagrande up front, they would sadly lose on away goals despite throwing everything at the Amsterdam side in the return leg.
​
The following season would see the Turin side go one step further, this time domestically, when the club won its fifth Coppa Italia title against AS Roma. Triumph in the domestic cup meant Mondonico’s men secured qualification for the following seasons’ European Cup Winners Cup. The first round saw the Granata drawn against the unfancied Lillestrom of Norway and they would scrape through only by virtue of a first leg win in Norway.  The 2-1 loss at home in the second leg showing the weaknesses of a side which had lost key personal after the UEFA Cup final defeat against Ajax.

By 1993, the likes of Enzo Scifo, Rafael Martin Vazquez, Walter Casagrande, Christian Vieri and Luca Marchegiani had all left Turin. Their replacements struggled to fill their void – Enzo Francescoli, former Milan goalkeeper Giovanni Galli and Andrea Silenzi proving able but unable to reach the European heights of the powerful 1992 side.

That win over Lillestrom saw Torino drawn against Aberdeen in the second round with the first-leg being held in the Stadio Delle Alpi in late October 1993. Aberdeen had qualified for that season’s tournament thanks to a runners up place in the Scottish Cup, after losing in a final to Rangers. The Scots were a club with notable European pedigree, having won the same Cup Winners Cup tournament in 1983 against Real Madrid. Meanwhile, the club nicknamed ‘The Dons’ had come across Torinese opposition before, drawing a Juventus side in the 1971 UEFA Cup which boasted such illustrious names as Bettega, Capello and Anastasi.

On the 20th October 1993 at 8pm, Torino lined up in front of 30,000 supporters at the Stadio Delle Alpi. Around 1,000 Aberdeen fans had made the journey from Scotland on a misty night where the bite of an Italian winter was beginning to hit home. Behind the home goal, Torino fans were in full voice, offering both vocal and pyrotechnic support in one end of the huge bowl shaped stadium.  Multiple flags lined the home end seemingly all emblazoned with either the words ‘Toro’ or ‘Granata’.

However, despite the home fans dominating the stands, there was a slightly unfamiliar feel to things, with Torino (despite being the home side) finding themselves having to play in its changed away kit of all white. Its traditional maroon colours adopted in honour of the House of Savoy were deemed to clash with the all red kit of the visiting Aberdeen.

And it was Aberdeen who began like the home side. They silenced the Granata crowd by racing into a 2-0 lead after only 24 minutes, thanks to goals from Mixu Paatelainen and Eion Jess. The turning point of the game, however, came at the end of the first-half, when Czech referee Vaclav Krondl added on a seemingly needless four minutes of stoppage time, which allowed Toro’s Sergio to pull a crucial goal back for the home side.

That goal eased the nervousness of Mondonico’s side and served to reignite the fire of a passionate home crowd. When the teams re-emerged, Daniele Fortunato scored to level the tie, before a sickening last minute free-kick from the predatory Carlos Aguilera gave Torino the overall lead at 90 minutes.

Despite the narrow defeat, the travelling fans had enjoyed an enthralling contest, experiencing the hostility of a passionate Italian crowd and leaving the second tie wide open in terms of finding an overall winner. Then Dons manager Willie Miller called Torino a ‘good side’ but came away from Turin speaking of a sense of ‘huge disappointment’ in losing the game after having a 2-0 lead. 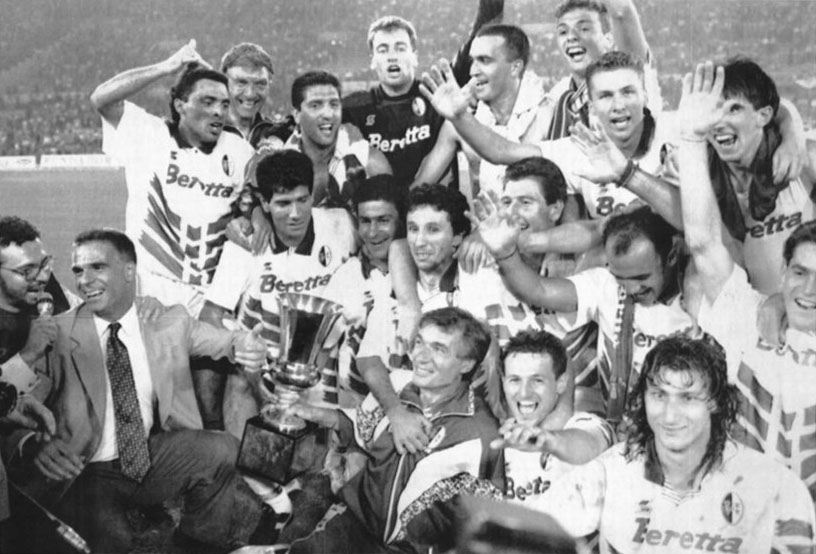 If the first leg of Toro-Aberdeen had started in a whirlwind fashion, the same could be said on a rainy, windy night in north-east Scotland. In front of a capacity 21,000 crowd on Novermber 3rd, Aberdeen would take the lead thanks to a 25-yard pile driver from English midfielder Lee Richardson on 12 minutes. Galli could only watch as the ball whistled past his right hand into the top corner.Having returned from Turin with two away goals and having moved clear at the top of the Scottish premier League, the home side were a confident bunch. But as it had done in Turin, disaster struck for Aberdeen just before half-time, as Fortunato restored the Italian’s lead in the tie. This was a cue for the 50 or so travelling Torino fans to throw a number of red flares onto the field of play, just by the normally staid Main Stand. Perhaps for the first time, the ultras had arrived at Pittodrie Stadium.

If this excitement had got the travelling fans into the tie, the same could be said for their team, who had been showing signs of struggling without their refined playmaker, Enzo Francescoli.  Slowly, however, they emerged from a defensive shell to take control of the tie, with Benito Carbone proving particularly troublesome for the Scots. And seven minutes after the interval, it was Carbone who provided the ammunition for Torino. He deceived Scottish international defender McKimmie on the left and found Silenzi in the centre, who headed past Dutchman Theo Snelders. Silenzi wheeled away towards the Torino fan,s sliding on his knees in celebration.

With Aberdeen now needing two goals to take the tie to extra time, the Italians went back into a defensive shell and saw out the final 90 minutes. However, despite their successful progression, their experience against a gritty Aberdeen side was anything but comfortable. Indeed, it is hard not to think that the Don’s all-action performance rekindled fond memories for Toro fans: memories of their own favourite Scottish son, Dennis Law.

Founder of www.theawaysection.com, Damon is currently based in Scotland. From his first football match in 1978 to more recent times, Damon somehow still manages to combine his sense of wanderlust with a camera and laptop.