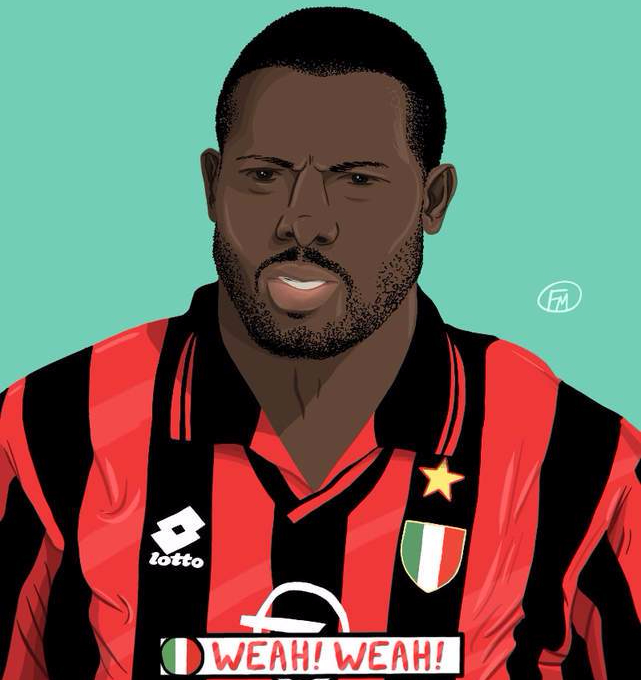 his month celebrates a quarter century since an unknown twentysomething called James Richardson emerged as a staple in our lives via Channel 4’s groundbreaking coverage of Serie A.

Following on from Part I, Emmet Gates continues The Gentleman Ultra’s countdown of Gazzetta Football Italia’s top 25 Galaccios, taking you through numbers 15 to six.

Remember, to keep the list interesting, a player is limited to a single appearance and dead balls are denied entry.
Of course not everyone will agree with the list, so let your opinions be known.

Poor Parma, they feature heavily on this list; players just had a propensity to score spectacular goals against the Emilia-Romagna outfit during the Gazzetta years.

Almeyda only scored two goals in three years for Lazio. A tenacious tackler in central midfield; goal scoring wasn’t exactly top of his agenda, but this strike is one that any centre forward would be proud of.

Gigi Buffon’s face is priceless after the ball nestles in his net; knowing full well there was little he could do to stop Almeyda’s simply outrageous effort. It was a once in a lifetime connection, giving the ball both power and bend, not an easy feat for any player.

Almeyda swapped Lazio for Parma in the summer of 2000 as a makeweight in the Hernan Crespo deal, but unfortunately couldn’t score any similar goals for his new side.

A goal that regularly pops up on social media every other week; Weah’s coast to coast goal on the opening day of the 1996/97 season showcased all of the powerful Liberian’s key attributes; speed, power and an expert finish.

Yet there is an element of good fortune in the build up; Weah gets a lucky break when two Verona players attempt to dispossess him but the ball unbelievably lands into his path as he performs a 180 degree spin and keeps on running. Weah was a dazzlingly dynamic player, but Maradona-esque ball control he couldn’t claim.

Criticisms aside, it shouldn’t take anything away from the fact that he ran from one box to another without any help from his teammates. This was a goal purely about Weah.

The third goal of a hat-trick that put the final nail in Marcello Lippi’s coffin, ending his all-conquering first stint at Juve. Following the game he would resign.
The instep-back heel goal was a particular favourite of <Crespo’s, and the Argentine scored several during his time in Italy.  The one against Juve is arguably the pick of the bunch.

What is most remarkable is the cross from Seba Veron. The pitch in the Stadio delle Alpi was never the greatest at the best of times, even less so in the harsh Piedmont winter. And despite it looking choppy, the ball from Juan Veron to his compatriot managed to stay mostly pinned to the turf.

Crespo waltzed through a demoralized Juve rearguard and performed the perfect coup de grace on the Lippi reign. The only negative of the goal is that Angelo Peruzzi almost saved it, slightly ruining the visual as the ball is slowed down upon entry into the goal.

Much like the bicycle kick, the diving header is one of the finer ways to score a goal. There’s something heroic about a player flinging himself through the air, desperately trying to get on the end of a cross. It’s comic book, Roy of the Rovers material. There was none better in this era than Ravanelli’s against Parma.

‘The White Feather’ was in the midst of his best season with Juventus after a couple as a bit-part player. He had formed a deadly alliance with Gianluca Vialli, and both enjoyed their best season’s in black and white.

Ravanelli, surrounded by two Parma defenders and on the edge of the penalty box, threw himself in the air like a javelin to meet Vialli’s cross and plants it into the bottom corner of the Parma net.

Ravanelli claims it was his favourite Juve goal, hard to argue with really.

Raw, animalistic, violent. Not words usually associated with brilliant footballers, but for Gabriel Batistuta, they’re completely warranted. The deadliest striker of the Gazzetta period by a long distance, he personified these characteristics in stadiums across the peninsula for more than a decade.
His goals came by such brute force that you almost felt sympathy for the opposing goalkeeper standing in the way of the ball, nobody could strike a ball, with the possible exception of Siniša Mihajlović, as ferociously as Batistuta. He was an adult taking out his aggressions on a football.

Whilst Roberto Baggio would delicately place the ball into the corner of the net, as if gently twisting a knife into a person’s back, with Batistuta it felt like he was bludgeoning hapless goalkeepers over the head, time and again. Yet there was a beauty in the visceral brutality of his goals. Nobody could display unrelenting power quite like the Argentine.

On first viewing it looks like a fluke, as if Shevchenko mainly just over hit a cross that accidentally looped over Gigi Buffon into the top corner. However, watch it several more times and you can clearly see he his intentions, for there was nobody to cross to.

An overlooked facet of the Ukrainian’s game was his ability to skip past players; Shevchenko was deceptively fast and this goal epitomises his qualities more than most. He races away from a peak Edgar Davids and skips past Mark Iuliano and Gianluca Pessotto like he was a child on the school playground.

He takes several glances up during all of this, and places the ball in the only pocket of space available. No matter what became of Shevchenko during his ill-fated English stint with Chelsea, which has sadly hurt his reputation on British shores, this was Sheva at his finest.

It’s difficult to think of a better debut goal as a professional player from any era, in any league. The goal that catapulted a young Cassano to superstardom, and in turn, heaped huge pressure on his slender shoulders from such a young age. The emotionally fragile player simply couldn’t cope with the expectations.

Though the entire goal is a mark of genius, it’s really Cassano’s opening three touches – from right heel to head to left foot – that exposes the sheer level of his innate talent. To pull off such fluid control whilst running at full speed and being pursued by two defenders on a muddy pitch, is nothing short of miraculous. One can imagine Cassano scoring this goal repeatedly in front of the San Nicola church in the claustrophobic Bari Vecchia area of the city.

Yet for the then 17-year-old Bari native, things looked rosy as the millennium dawned.

The greatest bicycle kick of the age. The Frenchman’s act of individual brilliance has been regularly featured in compilation videos and for good reason.

The way Djorkaeff manages to contort his body like an accordion in the direction of the goal, given that he was already positioned at an extremely tight angle and with a Roma defender racing towards him, let alone make such a perfect connection, is incredible.

What wasn’t incredible was the initial mistake from Roma defender Fabio Petruzzi, inadvertently setting up the strike by clumsily attempting to clear the ball following Giorgio Sterchele’s save, leaving the ball hanging in the air.

For the 1997/98 season, Djorkaeff’s image – mid-contortion – was imprinted in the design of Inter’s season ticket.

There perhaps was no finer striker on the planet at the beginning of the 21st century than Vieri. The burly Italian was very much a great goalscorer rather than a scorer of great goals, as the old adage goes.

This strike temporarily halts that assessment. Vieri did occasionally score the odd belter, and this is probably the best goal of his nomadic career. How often can one say they made a mockery of the great Lilian Thuram before pinging the ball past Gigi Buffon into the top corner from outside the area?

It was so good that even Roby Baggio gave it an appreciative smile and clap. The ultimate stamp of approval if ever there was one.

The peculiar thing about Mancini the manager is the pragmatic way he sets his team’s out to play; always defensively sound and generally a reactive side. This goes against everything Mancini the player was; a swashbuckling No.10 who floated around the pitch with style and panache. It’s an odd juxtaposition in the progression of Mancini from player to coach.

The point is no better illustrated than by this goal against Parma (poor Parma, still not finished with them yet). Not many players would have attempted something so radical, yet Mancini did. Not many could’ve pulled it off, but Mancini did. He doesn’t even look where the net is until after he’s connected with the ball. It’s a simply outrageous goal from a wonderful player.

The disbelief on Christian Vieri’s face as he sprints over to join in the celebrations with Mancini reinforces the sheer astonishment and ecstasy that moments such as this can bring, not only to fans but also players.

Even Mancini the manager would’ve surely have approved.

Emmet is a freelance football writer based in Italy. He is the author of Goal O’The Times and as well as The Gentleman Ultra, he has written for FourFourTwo, These Football Times and In Bed With Maradona.