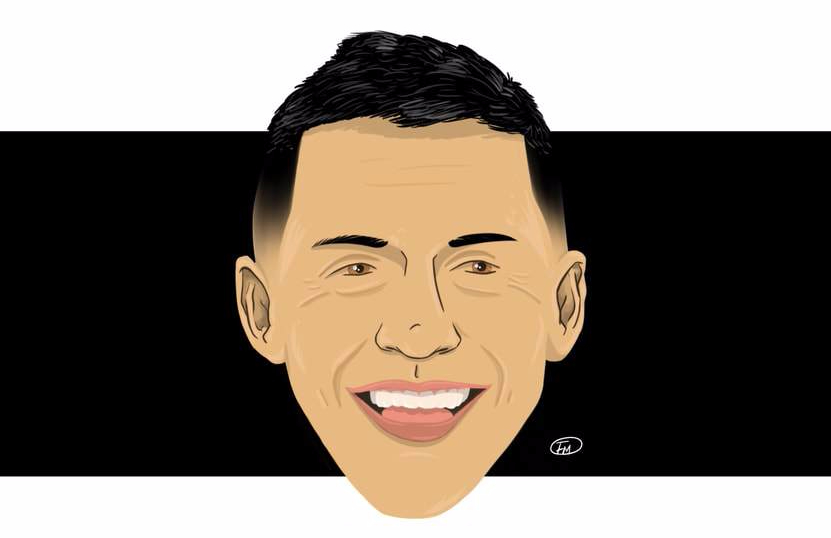 At Udine, the video tapes were beginning to pour in. A talented teenager, wiry but tenacious, had caught the eye in Chile’s arid north, deep in the dusty copper country. A 16-year-old Alexis Sanchez, playing for Cobreloa in his homeland, would soon be on his way to Italy.

In the town of Calama, built to service the world’s biggest copper mine, Chuquicamata, it was fitting that Udinese discovered Sanchez while digging deep into their reserves of endless video footage. Amongst the countless hours of football the club’s scouts watched, the numerous players of varying ability that graced their television screens, one stood out far and above the rest.

“We had heard about Alexis as a teenager,” said former Udinese technical director Fabrizio Larini. “We have a centre where we receive tapes from games from all the world’s leagues and he was flagged up to us. We sent a couple of scouts to see him live and they confirmed what we had heard. We knew immediately.”

At Udinese, though, things are done differently. The club’s realisation may have been immediate, but Sanchez’s introduction to Italian football was not. For all of his exciting potential, the young winger was still a latent talent, a blossoming jewel from Tocopilla, an industrialised port in the north of Chile.

He was expected to move straight to Udine, in north-eastern Italy, when the £2 million deal was completed, but as Larini put it: “you need to let players develop in a comfortable environment.” That has been a key element of the idealistic approach to youth taken by the Zebrette. There is no rush to vindicate the outlay for a young player, no hastiness to play a youngster simply for experience’s sake. “Only when he was ready did we bring him here,” Larini affirmed.

The state-of-the-art player analysis centre in Udine had identified Sanchez as a youngster with an incomparable aptitude for skilful trickery and dribbling, a potent and menacing wide player with room still to grow. But following confirmation of his move to Udinese, Sanchez would spend two more years in South America.

“We sent him to Colo Colo for a year in Chile, then River Plate in Argentina, another step up,” Larini said. “That is crucial if you are to let players fulfill their talent.” When he eventually arrived in Italy in 2008, Sanchez had improved considerably. The self-indulgent propensity for showboating had diminished, his physique had grown in stature and the wait had only heightened his enthusiasm.

His first Serie A season was not without difficulty, however. Played predominantly as a right-sided winger, Sanchez was tasked with providing for forwards Antonio Di Natale and Fabio Quagliarella. There were moments of undisputed individual brilliance, but it was a season of inconsistency for the Chilean, not entirely surprising given it was his first taste of a top European league.

Sanchez scored three goals in his debut campaign for Udinese, the first of which almost typified his inherent pertinacity. A determined, enduring run down the right wing ended with the youngster, two months into his Udinese career, tapping in at the far post against Lecce. It was unspectacular, but an example of what supporters could come to expect.

Sanchez’s former coach at the club, Pasquale Marino, later emphasised the desire to simply play football ingrained within the mindset of the teenager. “Alexis could easily play three matches per day,” he said. “As soon as the [training] match started, Alexis would abandon the scario [recovery] and run up to me, almost imploring: ‘Mister, let me play, just for a few minutes. Please, please, please. I promise I won’t get injured.’ Football is an enormous pleasure for him.”

But work-rate and commendable zeal was not enough to fully satiate the demands of the expectant fans at the Stadio Friuli. Sanchez came under criticism for his performances during his first season with the club, unable to prove himself beyond sporadic demonstrations of his talent.

But not everyone was unconvinced. Teammate Toto Di Natalie hailed Sanchez’s “skills of a juggler, and the hunger of a wolf”. And for all the scrutiny he had come under, few had entirely written off the possibility that he would soon excel in Serie A. 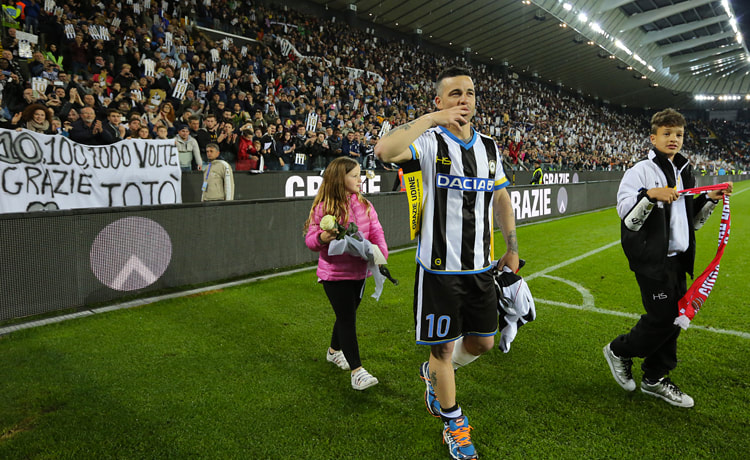 READ ‘In praise of Toto Di Natale: the kind-hearted goal-scorer and hero of Udine’

Having adjusted to a new league, a new country and continent, Sanchez began to reach a certain level of consistency the following season. He had acclimatised to Italian football, grown used to the idiosyncrasies of a once alien division. And there was no sense of homesickness accompanying the move to Europe; Sanchez enjoyed the architecture of Udine, the Piazza della Libertà with its Renaissance buildings and the impressive clock tower and cathedral. The relaxed nature of the city suited Sanchez’s relatively placid personality.

Now in his 20s, increasingly confident and assured, Sanchez was instrumental in his second season as Udinese embarked on a run to the Coppa Italia semi-finals; he was awarded man of the match, even as his side were knocked out by Roma. In the league, he was again tasked with being one of the primary creators, and built well upon his first Serie A campaign.

Udinese would finish in a disappointing 15th place, but Sanchez had proved one of the standout performers in an underachieving squad. There was, though, one aspect of his game that had left the Chilean unsatisfied with his contribution. “I need to score more goals,” he vowed in pre-season ahead of the 2010-11 season. Udinese had, undoubtedly, relied too heavily on the unerringly clinical Di Natale.

After returning from an impressive World Cup in South Africa with Chile, Sanchez was intent on bettering his goal scoring. That drive for success, as has so often been the case throughout his career, quickly became a reality. His combination of sheer tenacity and pure talent began to appear uncontainable for even the best Serie A defences.

Sanchez’s first goal didn’t come until the end of October, a sensational strike from distance against Bari after a powerful run from the left hand side. It was the beginning of an irrepressible partnership – Sanchez and Di Natale, a duo at its best in a 7-0 away win at Palermo. The Chilean scored four, one a pitch-long run, while the Italian contributed with a hat-trick. Elusive, skilful and ruthless, the Rosanero defenders were left helpless and humiliated. It was this performance that truly cemented Sanchez as one of Serie A’s best, and one of Europe’s most in-demand young players. He would finish the season with 12 goals and 12 assists, and named World’s Most Promising Youngster ahead of Gareth Bale and Neymar. Udinese had reaped the rewards, finishing fourth and qualifying for the Champions League playoffs thanks largely to he and Di Natale’s goals.

And Di Natale has since waxed lyrical about his former teammate. “I have played with several great players but Alexis Sánchez was the best of all,” he said. “He is the best. Better than me? Obviously, yes!”

Udinese’s risk had undoubtedly paid off. The decision to allow Sanchez to develop in South America prior to his move to Italy was fully vindicated, and many Bianconeri fans had gone from expressing doubt over a seemingly uncertain, unproven teenager to adoration and admiration for the player he had become.

“It was no surprise to me,” said Nelson Acosta, the coach who first drafted Sanchez, as a 16-year-old, into his first team at Cobreloa.

The first time I saw him I said he had no limits. He has everything. Normally in young boys there is something missing, be it skill, or vision, or the ability to beat a man. Not in Alexis. That is very rare.

Inevitably, Sanchez’s superb form in the 2010-11 season had led to interest from some of Europe’s biggest clubs. There was no suggestion that the then 22-year-old would attempt to force a more lucrative move, however. Even when he was receiving incessant praise from those around him, told that he could be “better than Messi” by national team coach Claudio Borghi, Sanchez remained grounded.

There was not even a hint of self-importance or entitlement. He once lost his car keys after driving to the centre of Udine on a shopping trip, and having realised he had no means of travelling back home, opted to run the four miles to pick up a spare set of keys, and then run back to his car.

But unfortunately for Udinese, even Sanchez could not resist the temptation of Barcelona, who came calling in the summer of 2011. A €37 million fee did represent a healthy and profitable return on the Chile international, although his loss was a significant blow for Udinese, who had grown accustomed to his repeated brilliance alongside the long-serving Di Natale.

Few could have begrudged Sanchez his move to the Blaugrana. It was a career defining transfer, an opportunity that even the most ardently Udinese loyalist would struggle to reject. But Sanchez did not forget the importance of his time in Italy, where he was given the chance to establish himself on the European stage, where he spent his formative years. “I have a lot to thank Udinese for too,” he later said. “It was a new experience in Italy and I learned a lot about the European style of football.” He had learned a lot, and gained a lot with Udinese.

From Tocopilla, the City of Energy as it is aptly known, to the mining hub of Calama, and on to the stark and cultural beauty of the Friuli-Venezia Giulia region in Italy, Sanchez’s early career was defined by his destinations. Next up was Barcelona, a move only made possible by his memorable sojourn in Udine.