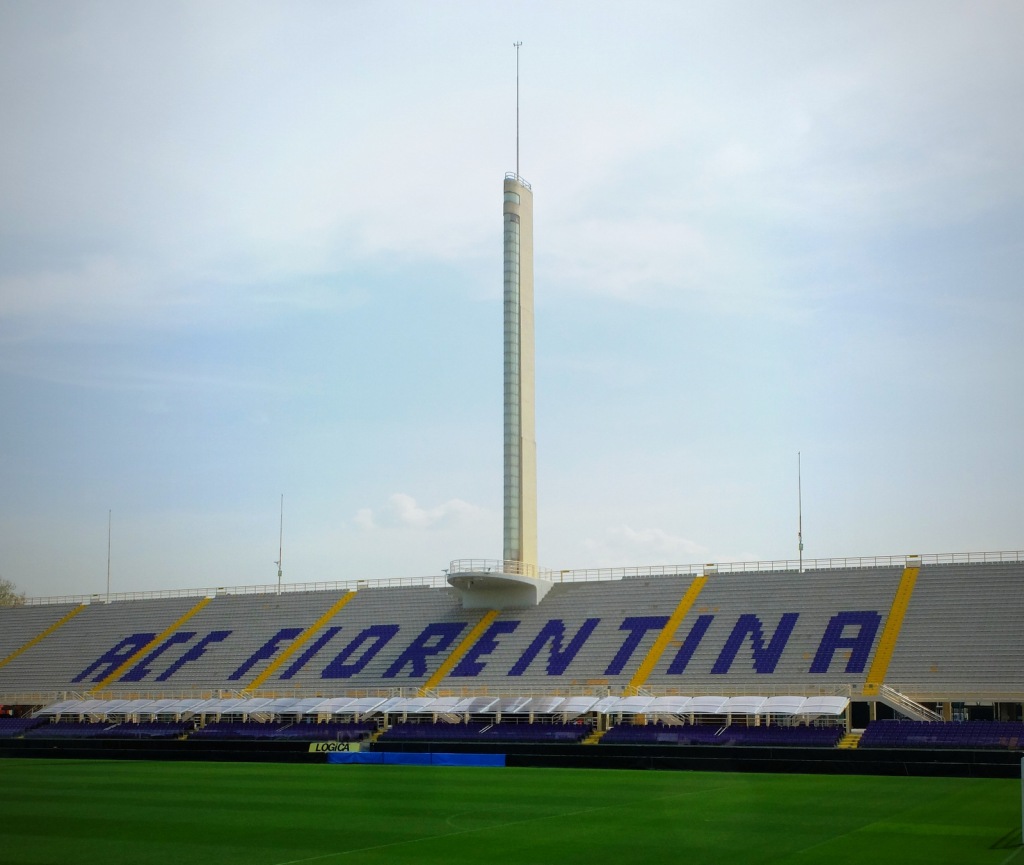 Purple permeates the Tuscan city of Florence in tribute to the football team that represents it – ACF Fiorentina, aka La Viola. It is said that the club’s colour has no actual connotation but came about fortuitously after the original red-and-white halved shirts of Fiorentina were washed, presumably at too-high-a-temperature, and the colours ran into purple. Admittedly the tale is most likely apocryphal, and cannot explain the switch from black to white shorts that followed. In any case, such a diffusion would have resulted in pink.

Conversely, the club’s badge is informed by the city’s heraldry. The roles are transposed, a fleur-de-lis does for both, typically in red mounted on a white background, certainly in the case of Fiorentina and often for the metropolis too. Florence has been a UNESCO designated World Heritage Site since 1982 and is famed for a plethora of Renaissance art and architecture. For those who visit here, football is generally an irrelevance and few will make the connection , let alone be aware of it. But the effect is the same: purple seems to suit the environment, just as if some design agency had proposed it as an apposite hue (no doubt for an exorbitant fee).

The Stadio Comunale Artemio Franchi is located far away from the older attractions that draw in the tourists, probably with intent. Why locate something as utilitarian as a football stadium alongside buildings as venerable as the Cattedrale di Santa Maria del Fiore, or the Palazzo Vecchio? Yet the Artemio Franchi offers more than mere function and was perhaps as progressive in its time as Il Duomo di Firenze was during the Renaissance. Pier Luigi Nervi was tasked with building the ground: a structural engineer and architect renowned for his pioneering appropriation of reinforced concrete, and a progenitor of Italian Modernism. [Built some 25 years later, Nervi’s more impressive contribution to stadium architecture is actually the Stadio Flaminio in Rome, which the Italian Rugby Federation is supposedly in the process of bastardising whilst their rugby team play out their international fixtures at the capital’s aesthetically flawed Stadio Olimpico].

Work began in 1930, completed in 1932, and the stadium has changed little since. It could even be said that Stadio Artemio Franchi kick started Nervi’s career. His portfolio is impressive: he designed the UNESCO Headquarters in Paris, the Torino Esposizioni in – you guessed it – Turin, Palazzetto dello Sport in Rome, the ‘Hall of the Pontifical Audiences’, which bridges the border between Italy and the Vatican City, and also had a hand in engineering the Pirelli Tower in Milan.

The slightly out-of-town location of the Artemio Franchi works to its advantage. It is a very low-rise structure, save for its svelte tower, and would be utterly overwhelmed amongst the grandeur of central Florence. Instead, we have residential tenements to the west, the modest Stadio Luigi Ridolfi to the south (a municipal athletics facility), and unabridged views towards the mountains north and east – the Florentine hills of Fiesole and Settignano. Trees dot the perimeter and a road encircles it. The stadium’s concrete framework can be viewed from all around.

From above, the stadium’s footprint traces a rather awkward ‘D’ shape. This is because the Artemio Franchi used to accommodate a 220 metre sprint track – that long to cater for the completion of marathons. In preparation for the 1990 World Cup, the entire running track was removed to allow for a second, shallower tier, which necessitated the pitch be lowered by 2.4 metres. This in turn facilitated the extraction of the temporary stands set behind each goal, which stood in isolation and probably didn’t hold that many spectators anyway, as well as freeing up the parterre to function once more as a parterre, rather than the secondary viewing platform it had ineffectually become.

Other changes included the replacement of some pretty awful roof extensions with ones more sympathetic – although still far from ideal – and the installation of individual seats in place of the existing wooden benches. The seats of the new lower tier were initially green, which worked, the rest a tasteful shade of grey. Now almost all are grey save for those in the ‘tribuna centrale’ (grandstand) and the lower tier facing it, which are purple – as is the club’s name spelled out in seats in the tier above; this also works. Since the 1990 renovations, the concrete has been refinished a second time and the stairways have been painted yellow.

Despite the increased capacity, plastic chairs and removal of much of the clutter that afflicted the stadium prior to 1990, it is many of Artemio Franchi’s pre-existing features that make it interesting: three helicoid staircases that provide external access to the upper gallery; the tower – streamlined, glass-fronted, almost art-nouveau; the bare concrete underside of the terracing and their gentle curve; the outward facade of the tribuna centrale; the roof. The tower might be considered extraneous, the stairs merely salutary, the façade functional, but the roof is to be greatly admired. It is cantilevered – or not, depending how you interpret the stresses placed on the bifurcating structure supporting it: 24 corbels, the tiers below serving as their counterweight. It is a shame the two (genuinely cantilevered) roof extensions weren’t done away with completely, but the original structure doesn’t provide much coverage.

It’s all very pleasing, yet Fiorentina have plans to construct a new home. Perhaps this is why, contrary to the attention lavished on Artemio Franchi’s interior in recent years, the exterior – the underside of the exposed terraces – is spalled, shabby, and neglected. The ground of arch-rivals Juventus has been cited as an inspiration and probable template, a stadium that was built on the site of the much maligned Stadio delle Alpi, which was too large, had a running track, lacked intimacy and atmosphere: built anew in 1990, things didn’t work out and Juventus ended up again sharing the Stadio Olimpico with Torino, before they knocked the Alpi down and put the Juventus Stadium in its place.

Fiorentina do not share a ground, and theirs is listed, comfortable in its surroundings. Does it not seem absurd to move away from a unique and perfectly serviceable structure in Florence only to then mimic a building contrived to address a predicament that had arisen in Turin? Could Il Duomo di Firenze have once been torn down and the Mole Antonelliana replicated in its place?