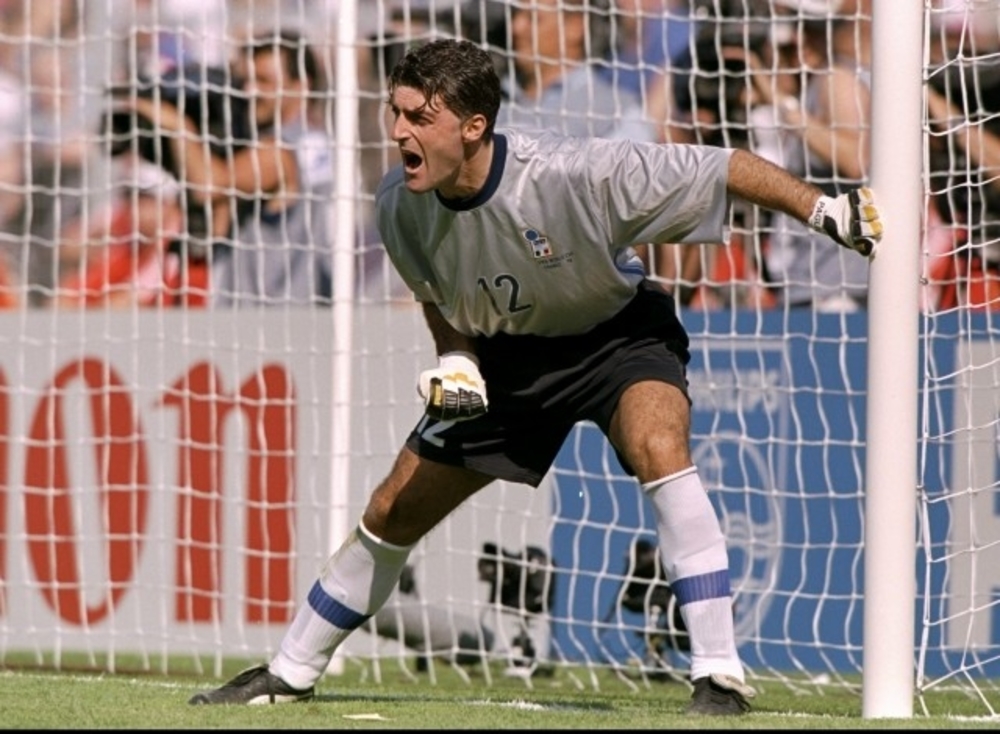 The searing Pasadena sunshine burned down on Gianluca Pagliuca with 15 minutes remaining in the World Cup Final. Brazil’s Mauro Silva unleashed a 25-yard shot straight at the Italian stopper, who misjudged the flight of the ball. Seemingly in slow motion, the ball spun off the arm of Pagliuca, gently bumped off the post and back into the keeper’s grateful arms. It seemed as though ‘Lady Luck’ was on Italy’s side, but then football can be cruel like that.

When Gianluca Pagliuca played his 571st game in Serie A he became the goalkeeper with the most appearances in the competition, overtaking World Cup-winning legend Dino Zoff. It was another World Cup winner, Gianluigi Buffon, who later took that particular record from Pagliuca. Italy was blessed with goalkeepers between Zoff’s retirement and Buffon’s emergence. Despite the high level of competition, Luca Pagliuca managed to stand out.

Bologna born Gianluca spent his formative years with his home-town team in their youth set-up before moving to Sampdoria in 1987. At Samp, under the stewardship of Head Coach Vujadin Boskov, Pagliuca would play in the most successful side in the history of the Genoa club.

The silverware started to arrive in his debut season. The club won only their second ever Coppa Italia by beating Torino 3-2 (after extra time) over the two-legged final. It was the first of six trophies in seven seasons and the first winners’ medal of the 21-year-old’s career.

Pagliuca was establishing himself as one of the best goalkeepers in the country. His agility and propensity for an acrobatic save both caught the eye and impressed in equal measure. His performances earned him the nickname ‘The Wall’ and it also brought him a place in the Italy squad for their own World Cup in 1990, although he never played in the competition.

The season following the World Cup was an historic one for Sampdoria. It brought their first ever Scudetto and, for their custodian, it may well have been the season of his career. As a long, hard campaign drew to an end, Sampdoria travelled to San Siro to face Internazionale in what was effectively a title decider. No game that season, or perhaps in his entire career, better exemplified Pagliuca.

The home side took the game to the league leaders as they looked to close the gap at the top of the table. It was almost like a siege on the Samp goal-mouth for long parts of the match, and their 24-year old shot-stopper lived up his ‘Wall’ moniker. Then, with the away side leading 1-0, a penalty was awarded to Inter, giving them the chance to finally get on the scoreboard after all their pressure.

Stepping up for the spot kick was Lothar Matthaus, the Nerazzurri captain and the man who lifted the World Cup for Germany the previous summer. Pagliuca dived to his right to stop the spot kick. The ball agonisingly sprung loose as Matthaus got to the ball before any of the in-rushing players. Before Pagliuca could get off the ground he had the presence of mind to stick a foot out and block Matthaus’ second attempt round the post. Samp went on to score a second and win the game to effectively seal their first title.

The latter stages of that match saw the goalkeeper come under siege with missiles reigning down on him from the home fans behind the goal. ‘The Wall’ was unbowed by the pressure, an example of his character and maturity for one still at a young age.

Disappointment followed the following season as Sampdoria couldn’t follow up domestically on the previous year. They did reach the European Cup final that season, but it wasn’t to be another history-making win. Johann Cruyff’s Barcelona won the Wembley showpiece 1-0 after extra-time.

Pagliuca won his third Coppa Italia with Samp in the 1993/94 season by smashing Ancona 6-1 at the Stadio Luigi Ferraris in the second leg after a goalless first match. It was to be his final season in Genoa as he became the most expensive goalkeeper in the world, moving to Inter for £7 million in the summer of 1994. That particular summer would prove to be eventful for him.

Pagliuca would go on to play every minute of Italy’s 1998 World Cup campaign in France. He only conceded three times throughout the tournament before penalties again saw the Azzurri knocked out. It was the ‘keeper’s final appearance for the national side.

It wasn’t just his ability that made him stand out. He had a presence about him on the field both stylistically and visually. Usually, with his shirt sleeves rolled up, sometimes his collar too, he looked different to other goalkeepers of the time. His style of goalkeeping was something of an all-rounder. He was athletic and spring-heeled, meaning his saves usually looked good. He was also good with the ball at his feet; as far as goalkeepers from his era, his style would certainly fit in more with the popular ‘sweeper-keeper’ role seen in today’s game.

The highlight of a near five-year stay with the Nerazzurri was a UEFA Cup final win over Lazio, in which Pagliuca captained the side. One year later he left following the signing of Angelo Perruzzi, returning to his boyhood side Bologna. He spent seven seasons with the Rossoblu and in his penultimate season he was a stand-out performer despite his side being relegated.

A season back in Serie A with Ascoli would be his last as he retired from the game in his 41st year. A career of over 600 club appearances and 39 caps saw him win trophies, set records and go to three World Cups.

When calcio ruled the world it was blessed with some of the best goalkeepers of all time, of which Gianluca Pagliuca was certainly one.