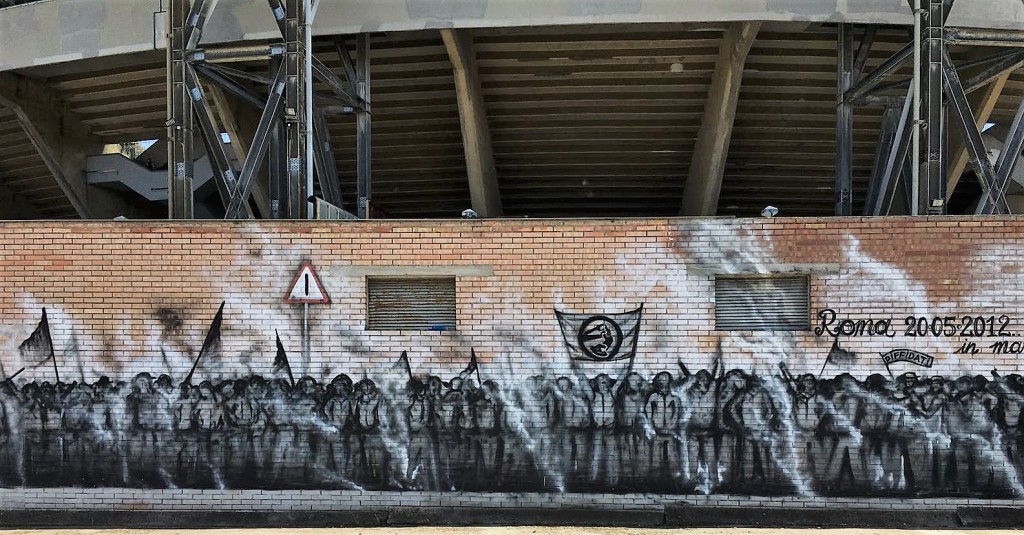 Taking in the sights and sounds of Via San Gregorio Armeno, a narrow alley in the heart of Naples’ bustling centro storico, is quite the experience. Although the street is most famous for its Christmas crib scenes (presepe), it is alive all year round, with tourists and locals alike stopping at every shop front to admire the latest hand-crafted figurines and quirky displays.

Alongside the irreverent depictions of politicians, royals and television celebrities, some of SSC Napoli’s most celebrated icons can be found among the thousands of figurines on display. There is even a surreal life-size tribute to manager, Maurizio Sarri, fully decked-out in club tracksuit. The diminutive local striker Lorenzo Insigne gets the same treatment a few steps further along. The street itself reflects a large part of the Neapolitan DNA: pride, passion, creativity and relentless energy. 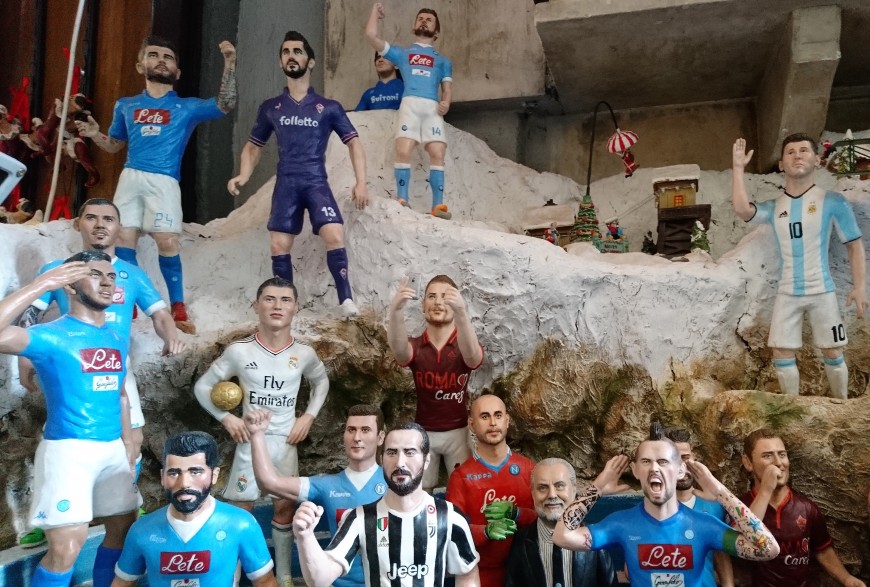 Visual displays of the city’s undying devotion to its football club are ubiquitous in Naples. From fan groups’ logos to Scudetto shields marking the club’s two Maradona-inspired league triumphs in 1987 and 1990, it’s almost impossible to walk 100 yards in Naples without seeing a tribute to the Partenopei. It’s all part of the magical allure of this proud city whose residents are renowned for living on the edge. 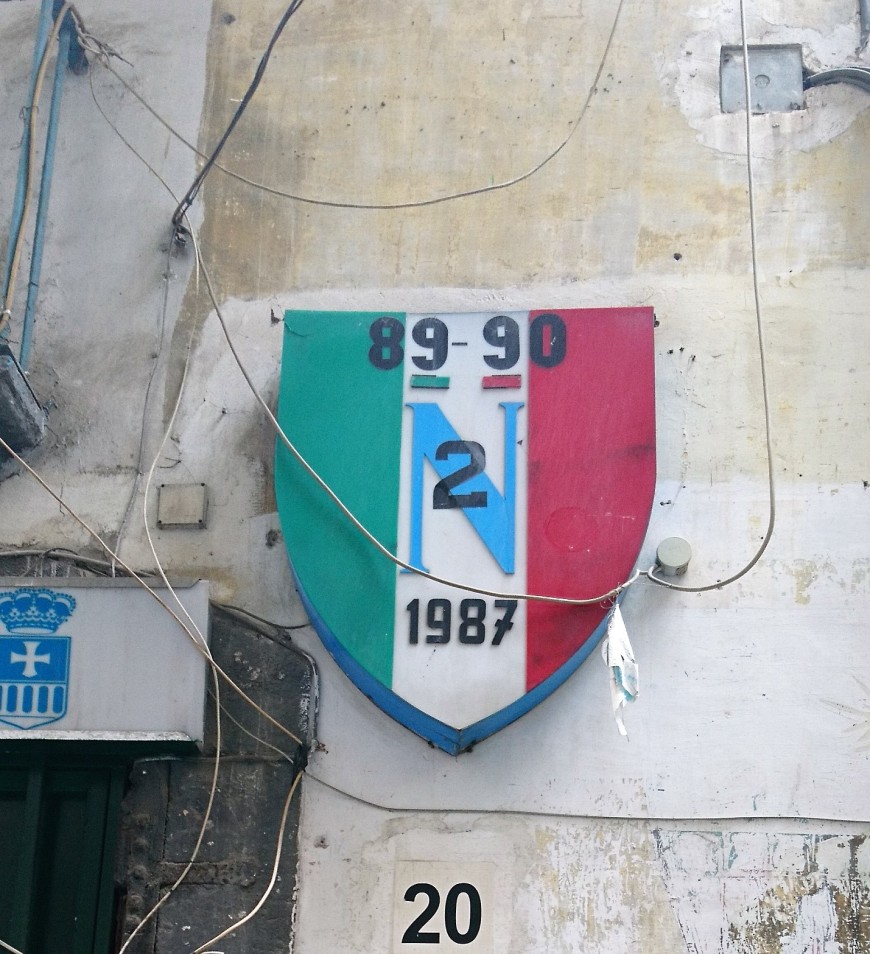 Prior to my recent trip to Naples, I had hoped the focus of this article would be less Maradona-centric than most, but it’s impossible to write about football and Napoli without referring to the man who has assumed God-like status in the city he called home from 1984 to 1991. Perhaps nowhere is he more celebrated than within the four walls of Bar Nilo in Via San Biagio Dei Librai. Bruno Alcidi, the bar owner has his own Maradona shrine, which includes a lock of the great man’s hair. Bruno took the hair from the headrest of El Diego’s seat when he was on the same flight as the Napoli first team squad, who were travelling to a match in Milan. Speaking in Maradonapoli, a documentary film by Alessio Maria Federici about the Argentine’s impact on Naples, Bruno said: “I took it [the hair] as a joke, in a way, and then I decided to create this shrine. All the Argentinians who come to visit Italy visit us here. As soon as they land, they come here to take a photo because they’re more obsessed with Maradona than us.”

Sensing that my group were visiting his bar for more than a quick coffee and a photo opportunity, Bruno began regaling us with stories of the Maradona era and his own love for the team and the city. He took regular breaks from the chat to show us his favourite Napoli clips on YouTube – including the celebrations from the previous day’s victory over Chievo (more on that match later) and Belgian striker Dries Mertens’ parents enjoying the match-day hospitality at one of London’s Napoli supporters’ clubs. 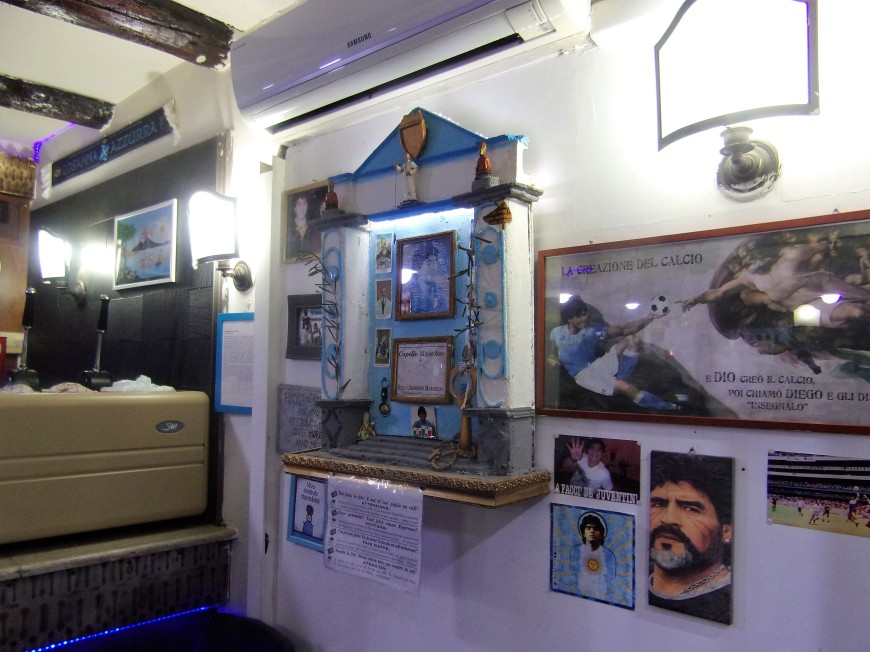 Among the most famous tributes to Maradona in Naples is the gigantic mural in Via Emanuele de Deo, in the heart of the city’s Spanish Quarter. Even this is dwarfed, however, by the work Neapolitan artist Jorit Agoch unveiled in February last year: a Maradona mural covering the side of an entire housing block in the city’s San Giovanni a Teduccio suburb. 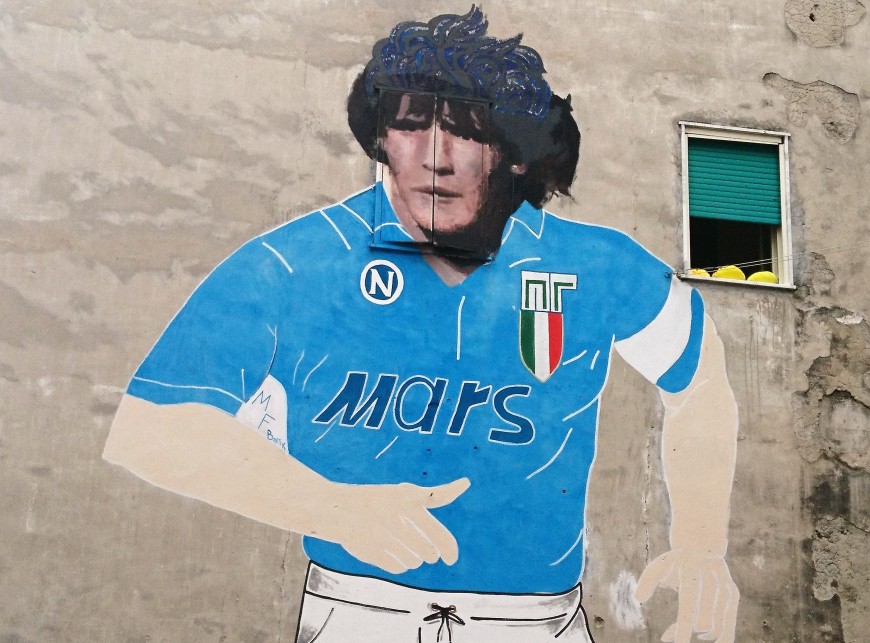 In such a rambunctious setting, Neapolitan highs tend to veer off the scale. Type ‘Napoli Scudetto’ into YouTube and get lost for hours watching the celebrations in ’87 and ’90 – the funeral procession, with coffins draped in the colours of Napoli’s league rivals, is a particular standout. Such highs are inevitably countered with extreme lows. Neapolitans were euphoric after beating Juventus on April 22, 2018 – and narrowing the Old Lady’s lead at the top of the table to a single point – only to have their Scudetto hopes crushed the following Sunday with a devastating 3-0 loss away to Fiorentina.

The whole gamut of emotions was on display when I visited the San Paolo on April 8, two weeks before the Juventus clash. With the Old Lady having beaten bottom-placed Benevento 24 hours earlier, anything other than three points would have seen Neapolitan hopes for a third league title all but extinguished. From the moment Pepe Reina conducted his warm-up routine to the thundering sound of ACDC’s Highway to Hell, the stage was set for an afternoon of high drama – the noise levels only dropping briefly following Mariusz Stepinski’s 72nd minute opening goal for the visitors. It all got too much for some of the locals, who took this as their cue to head for the exits. A middle-aged man in the block in front of me had to be restrained by two stewards as he ‘debated’ a misplaced pass with another fan.

They don’t do things by half in Naples – and neither do the football team. With one minute of normal time remaining, Polish substitute Arkadiusz Milik headed an Insigne cross home to give Napoli a lifeline. Two minutes later, Amadou Diawara brought the house down when he calmly collected the ball from a corner kick and curled home superbly beyond the Chievo keeper. Fans were strewn across seats and aisles and the paramedics had to assist another middle-aged man, who couldn’t quite believe what he was witnessing. Thankfully, after some expert attention and water, all was well. It’s worth noting that this drama all occurred within the San Paolo’s designated family section.

Subsequent results shattered the third Scudetto dream for another year. But as long as Napoli has a football team – and they very nearly didn’t of course (the club was declared bankrupt in 2004 and had to start again in Serie C1 as Napoli Soccer before current owner Aurelio De Laurentis restored the name SSC Napoli in 2006) – its people will continue to dream.

There is an old adage that says “See Naples and die.”  My advice would be “See Naples – then see it again and again.”

Martin’s passion for Italian football kicked off with the ‘Notti Magiche’ of Italia ’90 – from Toto Schillachi to Ciao, the mascot. He thinks the San Siro stadium is the finest building in the world!