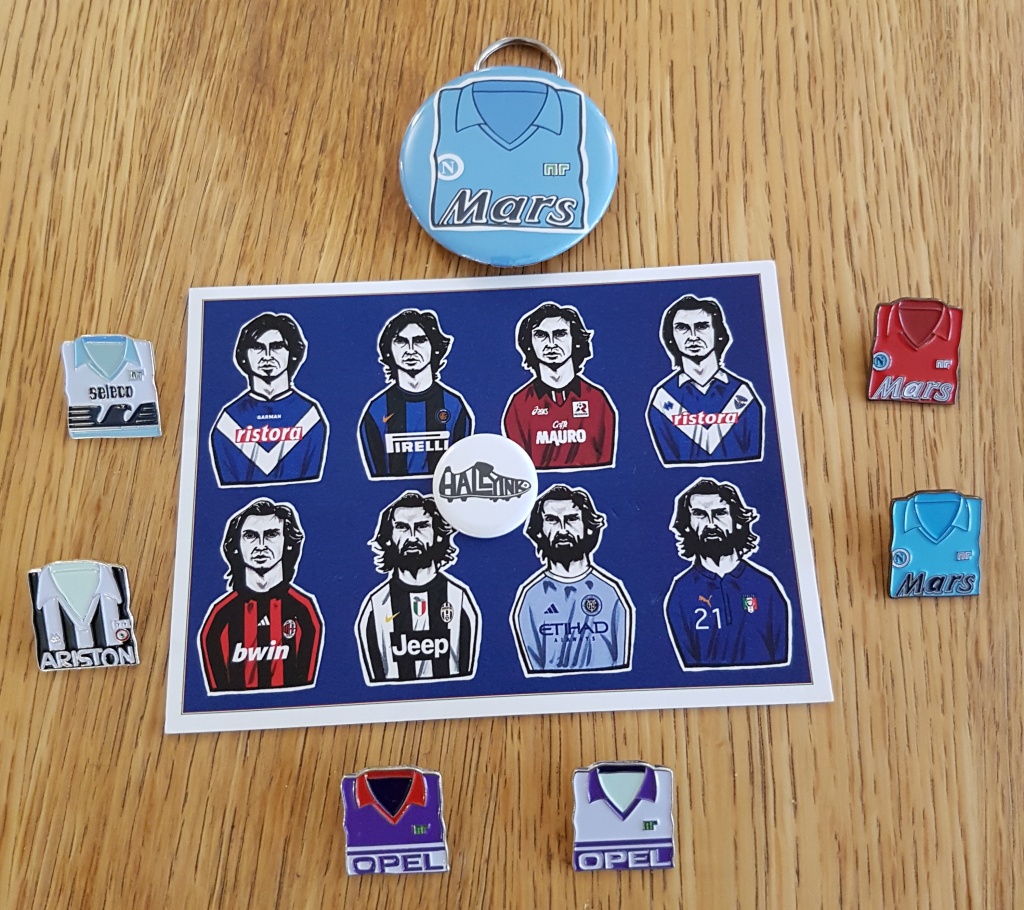 There is something inspiring about Italian football’s heyday. During the 1980s and 90s’, Serie A had it all: Maradona’s Napoli, Osvaldo Bagnoli’s Verona, Ronaldo’s Inter, Lippi’s Juve, the Dutch stars of Milan, the rise of Parma, Roberto Baggio’s divine ponytail and of course, the Classic Kits. These were Calcio’s Renaissance years, a time when money, genius and competition fused to once again make the peninsula a hub of creativity and innovation.

This in turn inspired a new generation of artists and designers, many of whom seek to capture our nostalgia for these years through the parlance of football art. One such craftsman is Gavin Hall of Hallyink. Gavin produces a range of clothing, memorabilia and artwork that embraces football’s golden eras. His Calcio-inspired collections include a print of 80s Serie A kits, Fiorentina and Sampdoria Pin Badges and a range of Italia 90 tributes.

To accompany our special TGU-Hallyink giveway, we spoke to Gavin about the inspiration behind his designs and his affinity to Italian football.

The Gentleman Ultra: Simple place to start, but how did Hallyink begin and what is the inspiration behind the designs?

Gavin Hall: Hallyink was born out of my love for football, culture and design, I wanted to create pieces fuelled by my affection for the game, and the aspects that shaped my passion such as Subbuteo, Panini and 80s and 90s computer games.

TGU: Our readers will be particularly interested in your Italian-inspired designs, when did you first become interested in Calcio and do you have any particular memories of the Italian game?

GH: Like most people my age from England, the key ingredient was Channel 4’s coverage of Italian football from 1992 onwards. Growing up in the pre-internet era, when football on the television was relatively scarce, or behind a paywall with Sky, the opportunity to watch live Italian football was awesome. From the first game between Sampdoria and Lazio, I was hooked, tuning in each week to discover a new brand of football featuring the superstars of the game, playing in amazing stadiums, wearing some iconic kits – and you couldn’t fail to be impressed by the passion of the fans. It was a great time to be young and its difficult to summarise how influential and culturally significant Channel 4’s coverage was on a generation of football supporters.

TGU: Your 80s Serie A shirt designs were a big hit on our Twitter. You also have some other Serie A designs, including Fiorentina, Juventus and Napoli pin badges, as well as AC Milan, Inter, Lazio and Sampdoria prints. Do you have any other Italian football designs in the pipeline?

GH: I have always been fascinated by shirt designs, especially from the 80s and 90s, I love both eras, with the simplicity and effortless cool of the 80s designs and the excess of the 90s. I have further designs planned inspired by Italian football, some shirt-focused, and some influenced by the great players and moments. Soon, I will be releasing a design focused on the 1992/93 season that captured my interest in calico as a child.

TGU: We see you also have an Italia 90 section on the site, a tournament that captured the imagination of many writers at TGU. What does that tournament mean to you?

GH: Italia 90 is the defining tournament for me as it was the first tournament I was old enough to fully understand, appreciate and engage with. For a young football fan it had all the ingredients of a fantastic tournament, from the very first game with Cameroon beating Argentina right the way through to the final.  Fantastic kits, which still remain iconic to this day, world-class players at the top of their game and underdog stories such as Cameroon and Roger Milla.  There were superb goals, pantomime villainy with the likes of Rijkaard and of course the performance of Gazza. As a young England fan I experienced raised expectations, hope and eventual heartache. The list could go on, but all of this was happening in Italy, with its fantastic stadiums and cities and to a 12-year-old who loved football, it was heaven.

TGU: A very hard question this one, but what is your favourite Italian shirt of all time?

GH: Whilst I adore all Italian football shirts, Sampdoria stand out for me as the greatest of all time. Iconic simplicity at its finest.  If I had to choose a one it would be the 1990-92 shirt worn by Mancini and Vialli. My adoration for this shirt lead to me making a pin badge of it.

GH: Tough question, Sampdoria would be the most obvious answer but it would be difficult to improve on perfection. I would probably say the Italian national team shirt, I would love to work on a design to create my perfect Italy kit and it would lean towards the famous shirts of 1982 and 1990. As for the player, it can only be the divine ponytail himself, Roberto Baggio.

Win a print from Hallyink with the TGU Giveaway here