The everlasting image of the 1994 World Cup portrays a lonely Roberto Baggio disconsolately looking down at the penalty spot while all around him Brazil players celebrate.

His head bowed, his shoulders sank like those of a man who had carried the weight of the world for too long, the Divine Ponytail had just watched his penalty disappear into Pasadena’s blue sky. The contrast between Baggio’s iconic dark blue Diadora kit, the green turf and the sea of gold shirts is simultaneously joyous and utterly harrowing, in the way only pictures of sport at its pinnacle can be.

As the saying goes, a picture really does tell a thousand words. Occasionally, however, the moments crystallised by the camera deserve to have their own stories told, for to understand the despair captured in a picture it is necessary to appreciate the ecstasy that preceded it or vice-versa.

Baggio’s picture undoubtedly falls into the former category, for it shows a consummate actor fluffing his lines on the grandest stage of all. Yet, it only tells a fragment of the story, as Baggio himself was the only reason Italy had got that far to begin with.

Four days earlier, the Azzurri’s no. 10 had scored twice to drag them past Bulgaria and into their first World Cup final in 12 years. Hailed as the Golden Generation of Bulgarian football, Dimitar Penev’s men had not simply travelled to the U.S. to make up the numbers, they had forced fans and pundits to sit up and take notice.

Inspired by Hristo Stoichkov, Krasimir Balakov, Emil Kostadinov and Yordan Letchkov, Bulgaria had beaten Argentina in the group stages, before disposing of the defending champions Germany in the quarterfinals. Ahead of their first ever semifinal, they looked more than capable of adding yet another prestigious scalp to their belt.

Within 20 minutes that task was made considerably harder, as Italy were awarded a throw-in on their left flank in Bulgaria’s half and Roberto Donadoni fed Baggio. Having received the ball close to the touchline, with his back to the goal and approximately 20 yards out there looked to be little, if anything at all, the Divine Ponytail could do apart from squaring the ball to a teammate.

Then, in one fluid movement, Baggio rolled past Zlatko Yankov and was away, running parallel to the box, rather than into it. Almost without breaking stride he evaded a sliding challenge from Petar Hubchev and when most expected him to take a touch, he simply allowed the ball to run away just enough to give himself the room he needed to bend it in the bottom right corner past Borislav Mikhailov.

The goal was Baggio’s fourth of the five the Azzurri had scored in the knockout stages up until then and it continued a remarkable transformation for the Juventus maestro. 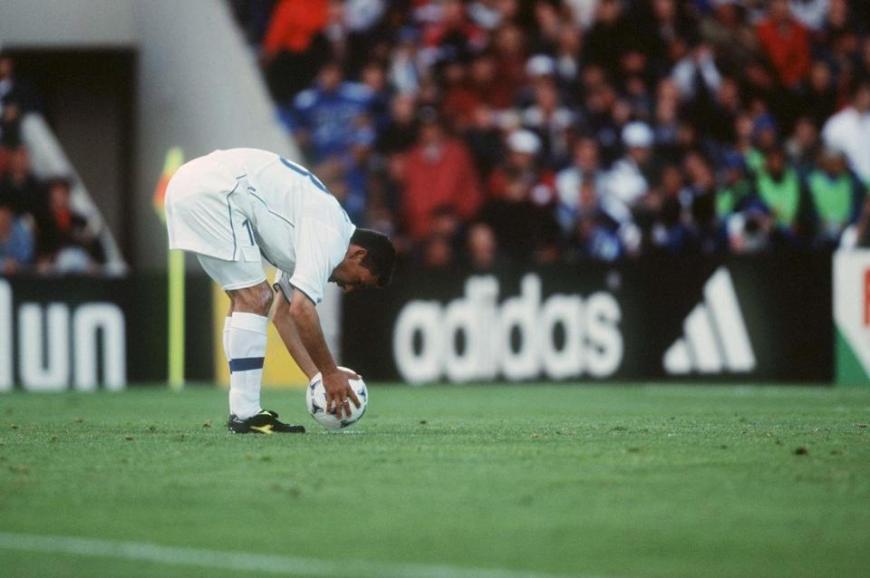 Baggio’s tournament, much like his team’s, had got off to a very inauspicious start when Italy lost their opening game 1-0 against Ireland at a packed Giants Stadium. Back in the East Rutherford venue for their second group game, things went from bad to worse as within 21 minutes, Gianluca Pagliuca became the first goalkeeper to be sent off at the World Cup after handling the ball outside the box.

Largely anonymous in the 110 minutes of football he had played until then, Baggio became Arrigo Sacchi’s sacrificial lamb, as the latter opted to withdraw his most talented player for reserve goalkeeper Luca Marchegiani. Italy’s no.10 and Sacchi never shared the same football philosophy and the former did little to hide his feelings as he strode to the bench. “This guy is crazy,” he muttered, clearly nonplussed by Sacchi’s decision.

Baggio’s namesake, Dino, went on to score the winner with 20 minutes to go, before a draw with Mexico saw Italy scrape through to the round of 16 as one of the best-ranked third teams.

The relief appeared short-lived, as the Azzurri looked devoid of ideas against Nigeria and were two minutes away from elimination, until Baggio produced a superb equaliser, before scoring the winner from the spot in extra time.

The Divine Ponytail had finally arrived at the World Cup and had picked up the conductor’s baton just as the music looked to have come to a standstill. With Baggio in his element, Italy overcame Spain in a bruising quarterfinal, their number 10 scoring a late winner from a seemingly impossible angle after rounding Andoni Zubizarreta

Four years since the “Notti Magiche” of the 1990 World Cup, Italy were again playing for a spot in the World Cup final. The Azzurri had limped through the knockout stages but Baggio’s opener against Bulgaria had their engine purring and he almost set up a second, squaring the ball to Demetrio Albertini whose shot crashed against the post.

Shortly afterward the two combined again, Albertini chipping a perfectly-weighted pass into the box to meet Baggio’s darting run. Like an artist performing at the peak of his powers, Baggio made the difficult look effortless as he slotted the ball across the face of goal and past Mikhailov to double Italy’s lead.

Within five minutes, he had put Italy on the brink of a World Cup final. If Stoichkov’s penalty on the stroke of halftime unnerved the Azzurri, the sight of their talisman going off injured with 20 minutes to go proved to be a much bigger worry. Baggio had felt a sharp pain in his right leg which would turn out to be a hamstring strain but conclusive answers over his injury were conspicuous by their absence, both after the game and the following morning when he was sent for a scan.

“It definitely needs 48 hours of rest,” Andrea Ferretti, the team’s orthopedic physician, said at the time. “And then we’ll pretty much wait until the last minute.” Until the last minute they waited and Baggio took the the pitch with a heavy strapping on his thigh. Having played the semifinal in New York, Italy had to fly six hours to get to Pasadena, where the final would be staged. Brazil, on the other hand, were already there and travel made his recovery harder.

The game largely passed Baggio by until he stepped up to take Italy’s fifth penalty. The rest, as they say, is history. Captured in a picture: a lonely Roberto Baggio disconsolately looking down at the penalty spot while all around him Brazil players celebrate.