The season of 1987/88 was not a good year for Internazionale. Karl-Heiz Rummenigge had recently left the Lombardian capital to be replaced by Aldo Serena, who the coach Giovanni Trapattoni brought in from his old club having purchased him from Inter in the first instance while still at Juventus, but the Italian striker only managed six goals in 22 matches. The Belgian attacking midfielder Enzo Scifo also disappointed, scoring a mere four times over 28 games. Alessandoro Altobelli managed a respectable nine goals in what would be the aging forward’s final year for the Nerazzurri, but it wasn’t enough for the club to finish the season any higher than fifth – two places down on the previous season.

But the feeling was that Inter were on the brink of something special, and Trappattoni reacted accordingly. Scifo was sold to Girondins de Bordeaux, Altobelli moved to Juventus for one final fling in Italy’s top flight, and Daniel Passarella returned to Rive Plate. In their place came established German internationals Andreas Brehme and Lothar Matthäus, two promising Italians by the name of Alessandro Bianchi and Nicola Berti, and the proven Argentine, Ramón Díaz (Díaz was actually a late replacement for the Algerian Rabah Madjer, who failed the club’s medical exam.)

The arrival of these new players coincided with the appointment of Uhlsport as kit supplier, taking over from Le Coq Sportif. Excepting the fabric from which it was made, the home shirt did not change much: the sponsor remained the same, the club’s crest, the number of vertical stripes, the hue of blue. Only the manufacturer’s logo was noticeably different – square instead of triangular. Nor was the all-white away shirt radically altered, save for this: a band of alternating, blue and black parallelograms, slightly out of sync with each other, wrapped around the jersey’s trunk with the sponsor’s name – biscuit manufacturer Misura – printed over the top. It is not possible to appraise a football shirt without observing its concomitant accoutrements, and the black shirts and socks that accompanied this jersey augmented its appeal.

Internazionale dominated in 1988/89, winning 26 matches, losing only twice, and accumulating a record-breaking 58 points, at a time when two points were still being awarded for a win and Serie A only accommodated 18 teams. Aldo Serena racked up 22 goals – the highest number in any one season since Paoli Rossi’s 24 for Juventus over the course of 1977/78 – Lothar Matthäus provided nine, Nicola Berti seven, and Ramón Díaz contributed twelve, many of them absolute screamers. In total, Inter Milan scored 67 times, which is an impressive number in a league renowned for its defensive acumen.

Inter began the 1989/90 season with the Scudetto sewn upon their shirts and the club’s badge relegated to the shoulder. But it wasn’t the same badge. Inter had ditched the biscione – a graphic of a serpent representing the city of Milan – in favour of their original emblem, which had never previously graced the shirt on account of the fact that Italian clubs only began to display their crests sometime towards the end of the 1970s. (Why, when they did, Inter opted for the profile of a snake, rather than their traditional insignia comprised of the club’s initials, I am unable to ascertain.)

Most Italian jerseys come alive when bearing the scudetto. AC Milan’s handles it very well, whilst for Juventus the opportunity to inject some colour into that achromatic strip of theirs must come as something of a relief. Strangely, Inter’s away shirt carried it better than the home equivalent; the away shirt was improved by it, whereas the home shirt suffered. It could be that the blue and black stripes combined with the red dots incorporated into the word ‘Misura’ detracted from the scudetto’s visual impact, whereas the predominantly white iteration offered something of a blanker canvas.

The biscione Inter badge was replaced by the Scudetto for the 89/90 season and later, their original emblem.

Inter were unable to reproduce the imperious form that had secured their 13th domestic title. They started well, beating Sampdoria in the Supercoppa Italia (Italy’s version of the community shield, except held in higher regard), but exited the European Cup in its early stages, losing to Roy Hodgson’s Malmo, and finished the season seven points behind champions Napoli, in third place behind co-habitants AC Milan. The problem? New signing Jürgen Klinsmann, brought in to replace Ramón Díaz, failed to combine with Serena the way the Argentine had the previous season. Despite this, the German striker finished the season as Inter’s top scorer with thirteen league goals, compared to Serena’s nine and Matthäus’s eleven. Meanwhile, Díaz scored fourteen times for Monaco playing three games less than Klinsmann.

In 1990, the Italian colours of the scudetto now absent, Internazionale’s badge shifted from the right shoulder to the left breast. Tradition prevailed as any temptation to revert back to the ‘serpent’ badge was resisted, a decision that stands to this day. Inter went on to repeat their 3rd place finish of the previous year, albeit by a slighter margin. This time it was Sampdoria who were victorious, with AC Milan again finishing in second place. But all was not lost. Inter made it to the final of the UEFA Cup where they were victorious, beating eventual Coppa Italia winners Roma 2-1 on aggregate. (English readers may recall Inter knocking out Aston Villa in the second round, courtesy of goals from Klinsmann, Berti and Bianchi during the second leg at the San Siro). 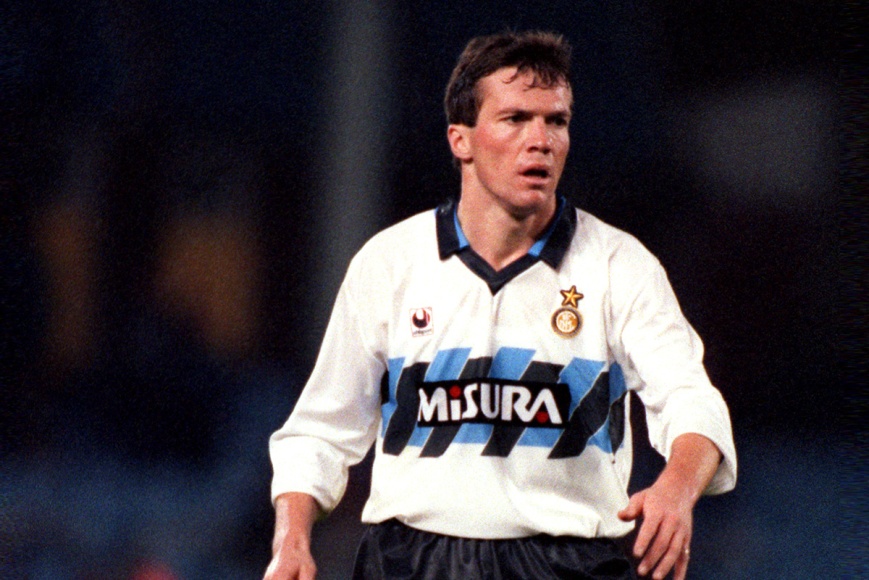 Matthaus donning the away strip with Inter’s original emblem, which remains to this day.

Giovanni Trapattoni returned to Juventus in 1991 in an effort to curtail the club’s gradual decline (he partially succeeded, winning 1993’s UEFA Cup, before moving on again to manage Bayern Munich). In an act that can be seen as retrospectively symbolic, Inter turned to Umbro to supply their gear – an association that would last the next seven years. During this period, Inter won the UEFA Cup for a second and a third time… but nothing else. Moreover, their league form became erratic. Placed second in 1992/93, followed by thirteenth in 1993/94, it would be more than ten years before they were again crowned champions of Italy.

The Uhlsport strip represents something of a highwater market, a three year period where Inter were more than equal to whatever AC Milan or Napoli could throw at them, but which didn’t quite lead to where it perhaps should have. It is not the point of this article to reason why this turned out to be the case, but merely to delight in how fortuitous it was that Inter’s brief resurgence, as the eighties turned into the nineties, corresponded with a strip that was worthy of the moment.