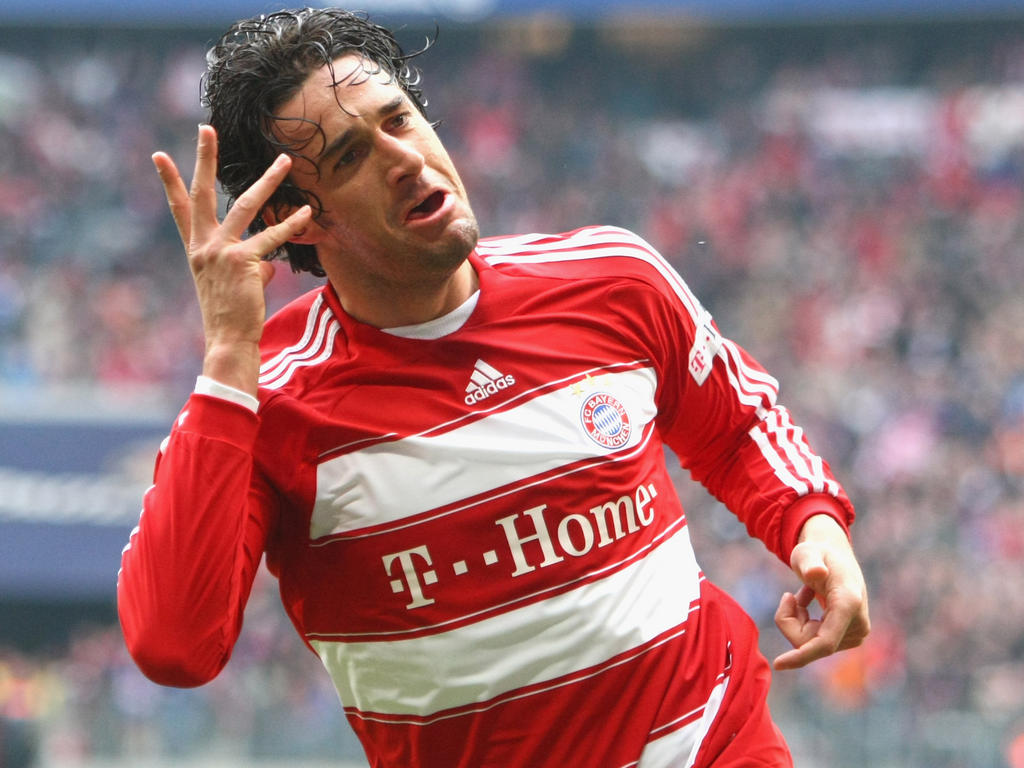 In early June 2007, Luca Toni walks into a hotel in the middle of Munich to face the German media. He is sat next to a familiar face and a man who reminds him of the greatest night in his career.

On Toni’s left bicep there is a tattoo which simply says “Berlino”. It was in the German capital that the forward capped off the best season of his career and became a world champion with Italy. As Toni and co celebrated, Franck Ribery was coming to terms with the cruellest of defeats after being the standout young player of the tournament.

It was surprising that it took a year for the pair to be reunited. Both were in high demand following the Berlin final, especially Toni. Having made his breakthrough at Palermo, the Modena native moved to Fiorentina ahead of the 2005/06 season for €10 million. He would go onto have one of the great seasons in modern Calcio history.

For the first time in nearly 50 years, a striker scored over 30 goals in a Serie A season. Toni was also the first Italian to win the European Golden Shoe and had guided Fiorentina back into the Champions League. But Fiorentina would not play at Europe’s highest table.

Days after the Berlin final, Calciopoli rocked Italian football. Fiorentina would stay in Serie A but faced a point deduction and gave up their place in the Champions League. Toni looked set to leave but was persuaded to stay for another year by Fiorentina President Andrea Della Valle.

But in the summer of 2007, he left Italy behind to join Bayern. The Bundesliga had not been a popular destination for Azzurri stars but Toni set a new path. In the years following his move, fellow World Cup winners Andrea Barzagli, Mauro Camoranesi, Massimo Oddo and Christian Zaccardo all followed Toni to Germany, largely off the back of the Italian forward’s incredible debut season in Bavaria.

It took just 14 minutes for Toni to open his Bayern account on the opening day of the 2007/08 season. His goal in the 3-0 win over Hansa Rostock was a sign of things to come. Bayern fans would get used to Toni wheeling away with his righthand rotating around his ear – his trademark celebration.

By the end of the calendar year, Toni had scored 17 goals in all competitions including four in a UEFA Cup game against Greek side Aris. Alongside Ribery and fellow new signing Miroslav Klose, the Italian forward was thriving and quickly became a fan favourite.

In the New Year, things continued in the same vein. Toni scored a perfect hat-trick in the second half during a 3-0 away win at Hannover. It summed up Bayern’s season perfectly. Toni scoring, clean sheets and three points. Bayern would only concede 21 goals in 34 league games, losing just twice.

During a dramatic UEFA Cup quarter-final, Toni scored in the 115th and 120th minute against Getafe to guide Bayern into the last four. Bayern would lose in the semi-finals to eventual winners Zenit St Petersburg, but the Italian would end up as joint top scorer in the competition.

Ahead of the German Cup final against Borussia Dortmund in Berlin, Bayern were on the brink of history. A game away from a domestic treble. With the league already sewed up, Ottmar Hitzfeld’s had declared it would be his final season in charge, making way for the younger Jürgen Klinsmann. Captain and goalkeeping legend Oliver Kahn had also announced he was hanging up his gloves.

Bayern dominated the game after Toni put them ahead with a typical close-range finish. But in added time in the second half, Dortmund equalised to send the match to extra time. Toni though doubled up with another poacher’s goal to seal the treble.

Toni finished as Bundesliga’s top scorer, Ribery as the best player and Hitzfeld as the best coach. It was a perfect debut season. Toni was the first Italian to be the top scorer in the German top flight and scored more goals in a single season at Bayern than any other foreign player, a record only beaten in recent years by Robert Lewandowski.

It is easy with hindsight to see that things could only go downhill from here. But at the time, Bayern looked set to dominate German football again. Coming off the treble, they hired a young manager who had worked wonders with the national side and they had a young squad with some real stars. 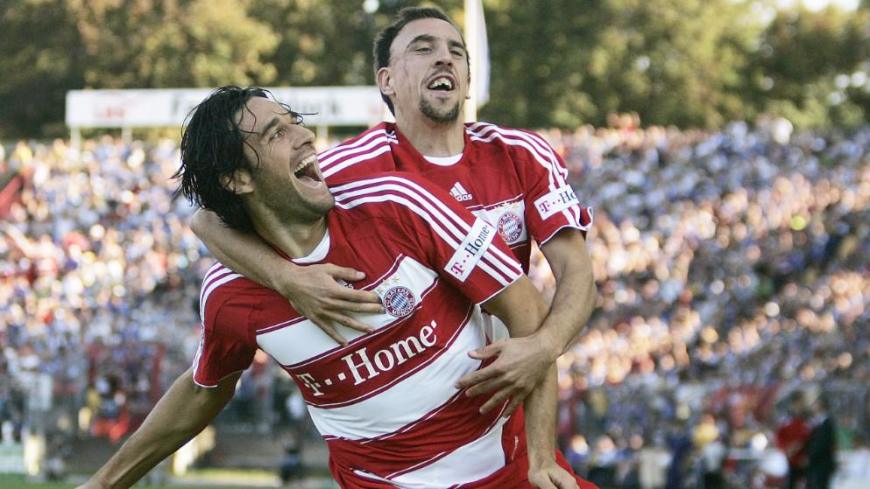 Toni though was fighting fitness issues. During his last season in Florence, he struggled with ankle troubles. Now he had an Achilles injury as well as stomach problems. He missed much of the season, including the potential emotional return to Fiorentina in the Champions League.

Klinsmann would be sacked before the end of the season, with the board fearful of missing out on a Champions League position. Jupp Heynckes was parachuted in to save the season and with the help of a returning Toni, Bayern finished second. Toni was even the club’s top scorer in the league, but it felt like a campaign that could and should have been.

Another summer and another new dawn in Bavaria. This time the experienced Louis Van Gaal was tasked with establishing a Bayern empire. But quickly Toni was left in the cold. Another injury meant he started the season in the second team but once fit Van Gaal was not keen on the Italian striker.

Toni admits that things nearly came to blows between himself and the Dutch coach. During the early part of the season, Toni was fined by the club for openly criticising the tactics of Van Gaal. With the club eighth in the Bundesliga and on the brink of an early Champions League exit, Toni left the stadium at half time after being subbed during a 1-1 draw against Schalke.

Another heavy fine followed and the end was close for Toni in Germany. Bayern’s general manager Uli Hoeness revealed Toni would leave in the January window and the love affair was over.

The second half of the season would see Toni in the Italian capital, hoping to earn a spot on the plane for the World Cup in South Africa. At Roma, he made an impact. He scored an iconic Giallorossi goal to secure a 2-1 win over title rivals Inter in front of a sold-out Olimpico.

Inter would pip Roma to the title and beat them in the Coppa Italia final. Ironically it would be Jose Mourinho’s Inter who denied Bayern their own treble in the Champions League final at the Bernabeu. A free transfer to Genoa in the summer finalised Toni’s departure from Germany, but years later his time in Bavaria and his troubles with Bayern would openly re-emerge.

Just weeks after claiming a second Capocannoniere at age of 38 with Hellas Verona, Toni was in court back in Munich. He was suing his former tax adviser in Germany for compensation, arguing that during his time as a Bayern Munich player he was registered as a Roman Catholic without his knowledge. Toni had, under the terms of his contract, expected the German club would look after tax deductions. He denied having any memory of a conversation about Bavaria’s eight per cent church tax in December 2007.

“I did not know that you have to pay so much money to be a Catholic here,” Toni told the court. “For me, everything in Munich was new when I came from Florence in 2007. If someone believes in God, he shouldn’t pay the church.”

The case was closed in Toni’s favour and he received compensation, but it was another stain on his Bayern career. Yet despite the bitter ending and aftermath Toni still regards Bayern highly.

“After the World Cup, Bayern was the best period of my career. It is the most Italian city in Germany. Every time I go back it feels like home.”

When Toni married his long-term partner Marta Cecchetto, Bayern chairman Karl-Heinz Rummenigge sent personal congratulations from the club. Toni was one of the few people Pep Guardiola talked to prior to him taking charge at Bayern after the pair had become friends during their time at Brescia.

58 goals in 89 matches in the pre-Ronaldo and Messi days is an incredible record. With his scoring ability and likeable character, it is no wonder the Bayern fans still hail Toni as a modern great.

At times it was tough for Toni in Germany, but he made a big impact in Bavaria and it made a big impact on him. He played with hundreds of players during his career, but when asked if he has any real friends from football, he lists three, “Dario Dainelli, Giampaolo Pazzini and of course Franck Ribery.”