A turgid nil-nil draw between Hellas Verona and Empoli at the tail end of the 2013 Serie B season may not sound like the most enthralling spectacle, but for the long-suffering Butei of Hellas Verona, this day marked the end of a very long and bitter journey during which the 1984-85 champions had fallen to the very lowest echelons of Italian football.

The raw emotion on display that day will live long in the memory, as fans who had remained steadfastly loyal to their club through long years in the footballing wilderness finally had something to celebrate. Never mind the circus that accompanied Ronaldo’s first game in Serie A, if you want to see Verona’s famous Bentegodi stadium in full voice, this is the moment you are looking for.

It was the last game of the season and, with third-placed Livorno losing to champions Sassuolo, one point would be enough to guarantee Hellas the second automatic promotion spot. As Empoli had already qualified for the promotion playoffs, both sides were content to simply wind down the clock. It was what the Italian’s, for reasons which remain murky, like to call un biscotto – a biscuit, a game in which the result is somehow predetermined to suit both teams.

It was, without doubt, one of the worst games of football I have ever seen. In fact, I don’t remember a single attempt on goal during the entire match. The lack of entertainment on the pitch didn’t matter for the near-hysterical fans who, as the final whistle approached, were reaching fever pitch. For Hellas, promotion meant a return to the top flight after an 11-year absence. When the full-time whistle blew, I was, I have to confess, one of the many hundreds of fans who flooded onto the Bentegodi pitch to join in the euphoric celebrations.

Orchestrating things that bright May day in 2013, as he had done for much of the season, was a 22-year-old Brazilian midfielder called Jorge Luiz Frello Filho. At 13, the talented young Brazilian had been spotted by Italian scouts. At 15, he was transferred to Italy where he joined the Hellas Verona youth setup, earning the princely sum of €20 a week. In charge of Verona, who were struggling at the bottom of Serie C at that time, was a journeyman trainer called Maurizio Sarri, the club’s third coach already that season. After losing 6 games on the trot, Sarri himself was sacked just three months after being appointed.

Filho made his competitive debut for the Verona on 8 October 2009, aged just 18. He then enjoyed loan spells, first with Sassuolo and then with Sambonifacese, in the old Serie C2, where he is still well remembered by locals as a highly gifted young midfielder.

He returned to Verona the following season and, despite the initial reservations of coach Andrea Mandorlini, who considered the slight, serious young Brazilian an unlikely Serie B midfielder, he made his debut in the Italian second tier on 4 September 2011. He soon become a key player for the Gialloblu, helping them to reach the playoff semi-final in 2012, which they lost to Varese. The following season his contribution was even more impressive, with 41 appearances and 2 goals, he was one of the stars of Mandorlini’s resurgent squad. Today that brilliant young playmaker is better known as Jorghino.

In the summer of 2013, following Verona’s return to Serie A, the squad was strengthened with the arrival of veteran striker Luca Toni, promising Paraguayan winger Juan Manuel Iturbe and Brazilian full-back Rômulo. Despite these eye-catching additions to the squad, it was Jorghino’s astute tactical awareness and footballing intelligence that made the team tick. In August 2013, he made his Serie A debut at home against Milan in Verona’s first match in the Italian top flight in 11 years. It was to be another memorable afternoon at the Bentegodi – after going a goal down, Toni responded with a double to secure a famous victory for Hellas. 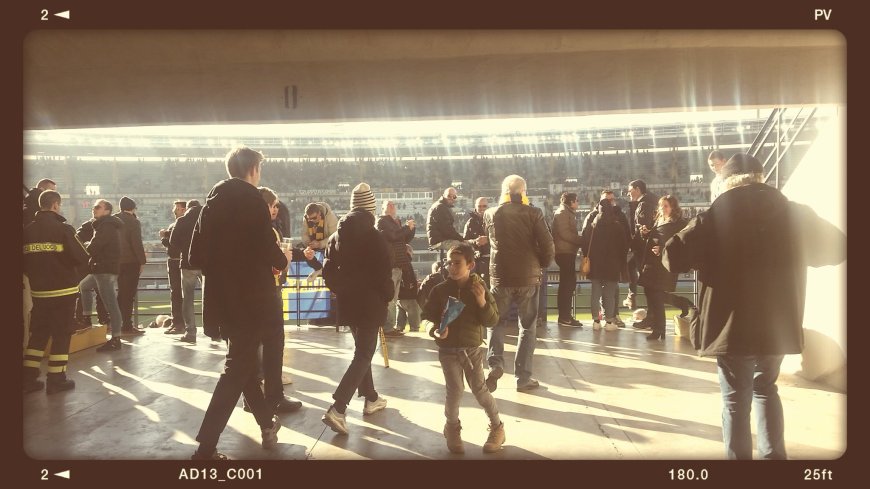 In search of this crazy faith: from Manchester to Verona

Despite a difficult schedule, which saw the team face Roma and Juventus in the opening weeks of the season, newly-promoted Verona took 22 points from the first 11 fixtures. Their form at the imposing Bentegodi was particularly impressive, with six home wins in a row. By the midway point in the season, they had 32 points, level with Inter. Despite a dip in form in the second half of the season, European qualification remained a real possibility, extinguished only on the last day of the season when they suffered a heavy 5-1 defeat away to Napoli. Despite this, Verona finished the championship in a highly respectable tenth place.

Although his movement wasn’t as eye-catching as that of his fellow south-American Iturbe (who scored eight goals that season), nor his contribution as decisive as that of the old war-horse Luca Toni (who scored 20), Jorginho was at the heart of everything Hellas Verona achieved that season. When I recently asked respected Sports Journalist Matteo Fontana how important Jorghino had been to that successful Verona team, his response was immediate and unambiguous – fundamental, he said.

He sees highways where there are only paths for others

Fontana remembers watching the youngster training back in his early days in Italy. Even then, Fontana remembers, it was obvious that Jorghino possessed a remarkable intelligence and tactical awareness beyond his years. Vujadin Boskov, the influential Serbian coach, said of Jorginho in 2012: “He sees highways where there are only paths for others”.

Claudio, a lifelong Hellas Verona fans, remembers a wet night away to Bologna in October 2013. It featured everything that was special about Verona that season, including goals from Toni and Iturbe. Jorginho dominated the midfield and rounded off a fine performance with a goal. Verona won 4-1.

The 2013/14 season, in which Jorghino was so influential, was to be a high point for Hellas Verona. The following season, they finished in 13th place. Jorghino joined Napoli in the January transfer window, where he was reunited with Maurizio Sarri, whom he remembered from his early days in Italy seven years earlier. In 2016, without their talismanic playmaker, Hellas Verona were once again relegated to Serie B.

Jorghino is perhaps one of the greatest talents to ever pass through Verona. The locals here remember him with a quiet paternal pride. They accept that some players are just too good to remain and when they fly away, even to a fierce rival, they begrudgingly accept that this is how it is in football.

Still, the Bentegodi hasn’t quite been the same since those glorious days in 2013 when promotion was earned and memorable victories won, while a slender young Brazilian with a deft cross or a 30-yard diagonal would pick out an Adonis-like striker who could leap above all others and score for fun.