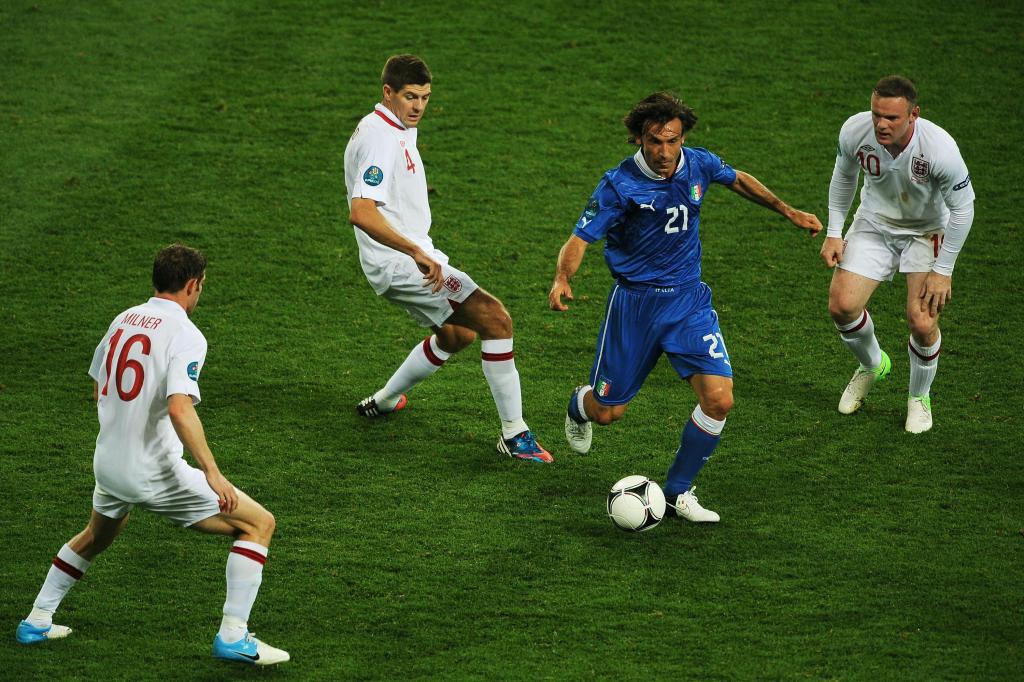 Carlo Ancelotti once said: “Pirlo spots a pass in a split-second that lesser players could spend a whole lifetime waiting to see.” Ancelotti is a better judge than most, given he coached Pirlo for almost eight years as he blossomed from a player with huge potential into one of the most elegant midfielders of his or any other generation.

While his great contemporary Xavi said he wanted at least 100 touches of the ball per game, Pirlo was an entirely different animal. He embodied the registaposition, orchestrating attacks with outrageous, long passes that were hit with unnerving accuracy. With his ability to spread perfectly weighted diagonal cross-field balls in behind opposing defenders, he was a full-back’s dream. As Marcello Lippi, the man who managed Pirlo to a World Cupwinners’ medal, put it: “Andrea was a silent leader. He let his feet do the talking.”

All the glowing tributes that have come forth since his retirement – from Zinedine Zidane to Gianluigi Buffon via Kaká and Gary Lineker – might never have been voiced had it not been for an old sage of Italian football, Carlo Mazzone. The Brescia manager was of the opinion that Pirlo, who had played his entire career to that point as a No10, was simply too slow in a game that was emphasising brawn over brain at the beginning of the 21st century. Already having Roberto Baggio on the books no doubt made Mazzone’s decision to move Pirlo back 30 metres that much easier, but it was still a gamble.

Of course everyone remembers the goal; the touch of ridiculous genius from Baggio as he pulled the ball from the sky like he had hands for feet, but people forget that it was Pirlo who took out the entire Juventus defence with what would soon be his trademark: the floating through-ball from deep.

Pirlo to Baggio, it sounds like fantasy football, as if someone was acting it out on a game of Fifa. It doesn’t really seem possible that both players played at the same time, let alone on the same team and created a goal like this. It was vindication for Mazzone and it was Pirlo’s eureka moment, a life-changing assist. He never looked back. “When we played together, everything we did depended on him,” said Baggio. Fine words from perhaps Italy’s greatest ever No10.

Pirlo had become a firm fixture in Ancelotti’s Milan as they won the Champions League in 2002-03 despite finishing some 11 points behind fellow finalists Juventus in the league. In December 2003 Milan flew to Japan to face Boca Juniors in the Intercontinental Cup, a side that contained a young Carlos Tevez on the bench.

Gaining possession just inside the Milan half, Pirlo jogs (did he ever run?) past Sebastiàn Battaglia before looking up and spraying a marvellous, curling 50-yard through ball for Andriy Shevchenko. The Ukrainian either embarrassingly misses the ball or purposely dummies it for strike partner Jon Dahl Tomasson. Either way, the ball lands at the feet of the unmarked Danish striker and he puts it through the legs of keeper Roberto Abbondanzieri.

Pirlo’s pass bares uncanny resemblance to Kaká’s more famous assist for Hernan Crespo’s second goal in Istanbul 18 months later; the bend of the body, the arc of the ball, the defence split in two. This feels almost like an undiscovered prequel, hidden away in the depths of YouTube and Japanese television archives. Now we know where the brilliant Brazilian found his inspiration.

Any match between Italy and Spain around this period was always billed as “Pirlo v Xavi”, yet this was their first meeting at a major tournament. Pirlo had missed the Euro 2008 quarter-final through suspension as Spain narrowly won on penalties.

Four years later they were drawn together in the same group and played out an entertaining 1-1 draw in Gdansk. On the hour mark, Pirlo receives the ball from Thiago Motta before coming face to face with Sergio Busquets. Pirlo glides past him like he wasn’t there and gallivants into the heart of the Spanish half before curling a wonderful left-footed pass through to Antonio Di Natale. The Udinese legend opens up his body and bends his shot past Iker Casillas beautifully.

Pirlo was outstanding in Euro 2012, which earned him a greater appreciation on English shores, but it all ended in helpless failure when Italy were demolished 4–0 by Spain in the final.

After several disappointing seasons at the end of his time in Milan, the 32-year-old Pirlo joined Juventus in one of football’s greatest free transfers. Juve manager Antonio Conte was implementing a fast and furious 4-2-4 formation and didn’t ask for Pirlo, but he was smart enough to realise that you couldn’t have Pirlo at your disposal and not use him, so he built the team around him. What followed was Pirlo’s finest season in years and a changing of the tides in Italy.

Pirlo registered 13 assists in Serie A in 2011-12, the best of his career, and the majority of them could have made this list (worthy mentions go to his two assists in the very first league game at the Juventus Stadium against Parma). However, this one against Atalanta was the best of a very fine bunch.

An underrated facet of Pirlo’s game was his ability to wriggle past dogmatic players – with the possible exception of Park Ji-sung, who Pirlo bemoaned in his autobiography. Even when it looked like he was about to be dispossessed, he could somehow emerge with the ball stuck to his feet.

In the build-up to this goal he is hounded by one Atalanta player and, when he skips past him, he is confronted by another. He twists and turns beautifully to free himself of the pests who are stopping him from doing the one thing he loves doing: spraying diagonal passes to full-backs.

Pirlo glances up for the briefest of moments before launching the ball towards Lichtsteiner, who not only ghosts in behind the opposition defence, but also the TV camera, which fails to track his run. The Swiss right-back scoops down to head the ball into the bottom corner of the Atalanta goal.

Signing Pirlo was a huge turning point for Juventus and Pirlo. The club picked up a player they needed badly and he found a team in which he could be the fulcrum. Four league titles followed.

It really couldn’t have been any other choice, could it? Pirlo’s sliding no-look assist has a valid claim to being the greatest assist in the history of the game, such were the stakes involved. With two minutes remaining on the clock, the game was goalless and heading for penalties and an inevitable victory for Germany.

The beauty of Pirlo can be seen all over this goal. In a decade when the game became increasingly fast and chaotic, box-to-box athletes were prioritised at the expense of technically sophisticated players. But he controlled the game at his own leisure and this assist is a prime example of that composure.

Had almost any other player in the world received the ball on the edge of Germany’s box in this situation, they would have done one of four things: attempted a shot through a mass of bodies, hurriedly crossed the ball into the box, played it backwards, or tried to find one of the full-backs out wide. Pirlo did none of these things. He invoked his prime asset: his zen-like ability to wait and wait some more.

Pirlo almost strolls along the outer periphery of the Germany box – in the dying minutes of a World Cup semi-final no less – waiting for the perfect opportunity. Three overzealous German players race towards him, leaving space for Grosso. Pirlo looks to his right before sliding the ball inside to his left towards the now unmarked Grosso. The rest is World Cup history.

Fabio Cannavaro won the Ballon d’Or later that year but it should have gone to Pirlo. He was the beating heart of the Italy team that won the World Cup; he orchestrated every move with nuance and patience. Pirlo somehow finished ninth in the Ballon d’Or rankings, once again proving how flawed the voting process is. It really should have been a toss-up between Pirlo and Buffon.

He provided three assists and one goal in Italy’s seven matches and he scored his penalty in the final. But his tournament will always be defined by the 119th minute in Dortmund on 4 July. Grazie, Andrea.