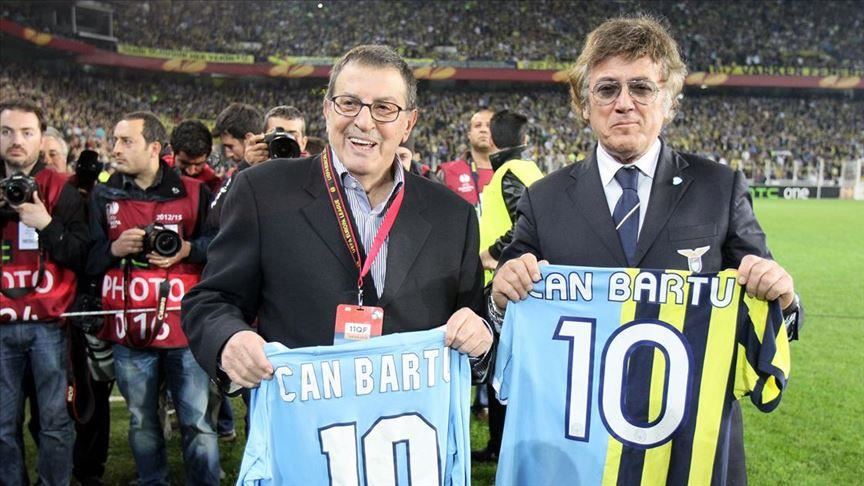 “We can’t lose in front of our fans,” exclaimed the captain of Fenerbahçe. Having drawn 0-0 in the first leg at Maine Road two weeks earlier, Fenerbahçe were now trailing 0-1 at the Inonu Stadium heading into the second half. The motivational words were enough to spark the team into life, but the main influence would be the skills that the skipper was yet to show. Thanks to Can Bartu’s assists, Fenerbahçe prevailed 2-1 to reach the second round of European Cup, whilst the English champions Manchester City would have to wait another 43 years to return to the top stage of European football.

After a brilliant performance on a glorious night for Fenerbahçe, Bartu had added one more impressive anecdote to his career. When he retired two years later in 1970, his status as a club legend was secured: having played for only one team in Turkey, he scored 162 goals in 330 matches, winning four league titles in the process. Alongside his success at Fenerbahçe, there was one other country where he made his mark. Playing there for three teams in six years, he even gained the nickname ‘Signor’. That place of course, was Italy.

If you weren’t a world-renowned footballer in the 1960s, your only chance to transfer to a major European club was to showcase your skills in the right place, at the right time. There were no football agents, no video analysis, limited scouting and communication sources. Bartu got his chance to shine when he played against Csebel SC in the first round of the European Cup in 1959-60 season.

Csebel manager Nandor Hidegkuti, who was one of the players of the ‘Mighty Magyars’, had recently started his managerial career. Having lost the match 3-2, he was so impressed by the skills of the opposition’s no. 8 that he wanted to talk with him after the match. It wasn’t a simple ‘congratulations’ or ‘good luck’ type of conversation between Hidegkuti and Bartu. It was the first step towards a future transfer. Hidegkuti became the manager of Fiorentina the following year, and one of the players that he wanted to sign was Bartu. In 1961, he got his wish.

In his first season in Serie A, Bartu quickly established himself in the starting line-up. During Fiorentina’s run to the Cup Winners’ Cup final, he scored a crucial goal against Ujpest Dozsa to clinch a 1-0 victory in the semi-final. The following month he created history, becoming the first Turkish player to feature in a European final. Unfortunately for Fiorentina, they fell just short in the showpiece event, losing 3-0 to Atletico Madrid in the replayed final after the first contest had been drawn.

That was to prove the high point of Bartu’s time in Florence. Hidegkuti’s departure in 1962 was a blow for the Turkish midfielder, and he was loaned out to Venezia the following season. Despite the side’s generally poor performances, Bartu’s individual displays earned him a second opportunity back at Fiorentina. However, his last season at La Viola saw him rotated regularly as manager Giuseppe Chiappella opted to select Kurt Hamrin and Juan Seminario for the two foreign player spots in the squad. It was time to move on.

Although his Fiorentina days were over, a new chapter in Bartu’s career began in 1964. Lazio, who were back in Serie A after three seasons in the second division, snapped up Bartu. At the end of the 1964-65 season, Lazio avoided relegation by just a single point. Although there were many crucial moments throughout the campaign, the vital one was Bartu’s goal on January 24 1965 against Genoa. The 1-1 draw midway through the season may have seemed like an irrelevant result at first sight. However, when the season concluded, that point proved to be the difference, as Genoa were consigned to Serie B.

The three seasons at Lazio were Bartu’s best years in Serie A. Alongside his flair on the pitch, his character led to him being called ‘Signor’ on the blue side of Rome, a nickname that stuck for the remainder of his career. Reflecting on the connection that he had with Lazio’s fans, Bartu at one time mentioned “I was watching Italian movies with my teammates which helped me to learn the language. Alongside speaking Italian and playing football very well, my attitude and friendships with my teammates made me a respected player in Italy.”

Bartu’s dribbling and creative passing skills on the pitch often saw his game described as ‘eleganza,’ as the Italian press compared him with the likes of Omar Sivori and Luis Suarez. Liverpool’s iconic manager Bill Shankly famously said “Football is like a piano. You need eight men to carry it and three to play the damn thing.” Bartu certainly fitted into the latter category.

He returned to Fenerbahçe in 1967 and played for three more years. After his retirement he started working as a football writer for various newspapers, whilst also appearing as a pundit on Fenerbahçe TV when it aired for the first time in 2004. When Şükrü Saraçoğlu Stadium hosted the UEFA Cup Final in 2009, he was the ambassador.

Four years later, during Fenerbahçe’s journey to the Europa League semi-final, a heart-warming moment occurred involving Bartu. Before the first leg of the quarter-final between Fenerbahçe and Lazio in Istanbul, a special ceremony took place. Lazio manager Maurizio Manzini, who used to watch matches as a Laziale in the 1960s, revealed that Bartu was one of his favourite players. When he came to Istanbul, Manzini was given the chance to meet his idol. The pair greeted one another before the game, and Manzini handed Bartu the no. 10 jersey of Lazio with his name written on the back. It was an unforgettable moment, and one which both men cherished as they posed for a photo to mark the historic occasion.

Bartu passed away on 11th April 2019 at the age of 83. Following his death, alongside the Turkish clubs, Fiorentina and Lazio wrote their messages of condolence on their websites and social media accounts. Amongst the Turkish and Italian tributes, there was one common word which was identified with Bartu: Signor.