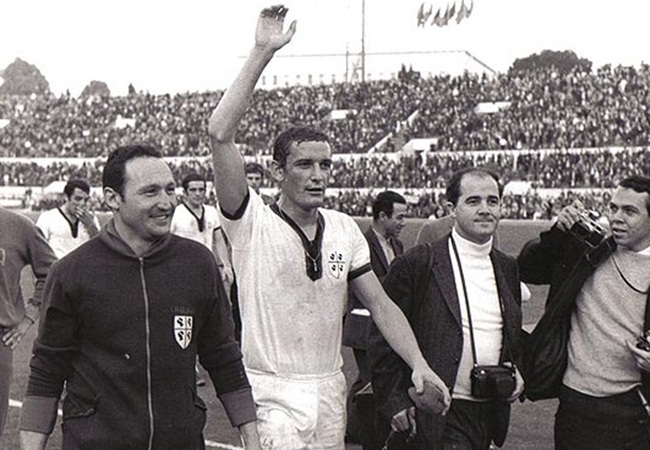 The story of Cagliari and their historic Scudetto winning side was not just a triumph of coach Manilo Scopigno and his team, but also the vision of Presidents Enrico Rocca and Efisio Corrias.

Enrico Rocca began his Presidency in 1960 whilst the Sardinians languished in Serie C. A businessman with a passion for football, Rocca used his entrepreneurial to recruit experienced lower league players, helping the team win promotion to Serie B in 1962. The Rossoblu secured promotion from Serie B on the 21st of June 1964, with a 3-1 win over Pro Patria. This ensured Cagliari would play in Calcio’s top tier for the first time in their history.

Arrival in Serie A

It was head coach Arturo Silvestri who oversaw the rapid rise from Serie C to Serie A. Silvestri already had top flight experience as a player having won the Scudetto with AC Milan.

With Cagliari set to make their Serie A debut, the squad included players that would eventually form the basis of the Scudetto winning side. Right-back Mario Martiradonna and midfielder Ricciotti Greatti both featured in the Rossoblu’s promotion while holding midfielder Pierluigi Cera arrived from Verona and attacking midfielder Nené arrived from Juventus. The Sardinians also acquired a 19-year-old striker by the name of Luigi“Gigi”Riva from Legnano. It would be the most important piece of business in the club’s history as the Leggiuno born forward shattered goal-scoring records and became the greatest of his generation.

Initially, Silvestri and his team struggled to adjust to life among the elite and at the half way point of the season they sat bottom of the table with just nine points. However an incredible run of results in the second half of the season, including wins over Juventus and AC Milan, saw the “Rossoblu” achieve a highly credible seventh place finish.

Silvestri left Sardinia to coach his former employers AC Milan in 1966 and was replaced by Manlio Scopigno. During his tenure at Vicenza, Scopigno had enjoyed two fruitful seasons culminating in a sixth place finish in Serie A, enhancing his reputation as an overachiever with provincial sides.

Despite missing Riva for the majority of the campaign after he sustained a broken leg playing for Italy, Cagliari still finished ninth. Nonetheless, Scopigno was replaced by Ettore Puricelli at the end of the season. Scopigno was dismissed by President Rocca after a controversial end of season tour in America was marred by disputes about match bonuses and a drunken episode in which the coach allegedly urinated in a garden bush at the Italian Console in Chicago. The infamous episode has been immortalised as the “fa pipì en plen air” affair.

Scopigno was never technically unemployed. Inter saw him as a ready made replacement for Helenio Herrera but he never actually got to coach the Nerazzurri. However with Puricelli failing to bond with his Cagliari squad, Scopigno was offered a reprieve and returned to Cagliari for the 1968-69 season.

“The philosopher” as Scopigno became known soon got to work transforming his Cagliari side. Gigi Riva, now nicknamed “Rombo di Tuono” or the “Roar of Thunder”, was wanted by teams all across Europe, but both Cagliari and Riva turned down many lucrative offers. Scopigno set upon building his team around the player who many consider to be one of the best strikers ever to grace Italian football.

Scopigno was busy in the transfer market. Midfielder Francesco Rizzo was sold to Fiorentina in a deal that brought goalkeeper Enrico Albertosi and attacking midfielder Mario Brugnera to Sardinia. Albertosi was a strong athletic keeper whose skills between the sticks were matched by his eccentricity and hot temper. Brugnera was a midfielder who could also play up front, adding versatility to the Cagliari side.

However it would be former Cagliari man Rizzo who had the last laugh, as his Fiorentina side won the Scudetto, finishing four points above the Rossoblu. Gigi Riva’s impressive goal-scoring feats continued however, finishing the season as Capocannoniere with 21 goals.

Club President Enrico Rocca handed the reigns to Efisio Corrias ahead of the historic 1969-70 season and Corrias continued to assist “the philosopher”, allowing him to reinforce the team that had come so close to the Scudetto the season before.

Sergio Gori and Angelo Domenghini arrived from Inter in exchange for striker Roberto Boninsegna. Both Gori and Domenghini had been a part of Helenio Herrera’s highly successful “Grande Inter” squad, adding undoubted quality but also top level experience. In a move that was considered revolutionary at the time, Gori was often deployed as a shadow striker just behind Riva, creating space for Cagliari’s talisman and dragging defenders into areas in which they were uncomfortable.

Riva was prolific once again, scoring 21 times in the championship winning season. But to credit Cagliari’s success to his exploits alone would be naive. The Rossoblu possessed flair in abundance. Nonetheless their title triumph was also built upon a strong and unforgiving defence. Scopigno showcased his tactical versatility by moving defensive midfielder Pierluigi Cera into the centre of defence. This allowed Cera to orchestrate both the defence and midfield in front of him. Along with Albertosi, Martiradonna and Zignoli, Cagliari’s defence were only breached 11 times throughout the whole season.

On the wings, the pace and skill of Nene and Domenghini was complimented by the movement of Gori, enabling midfield maestro Ricciotti Greatti to create chances for Riva, which he invariably scored. Giuseppe Tomasini rotated with Mario Brugnera to sit in front of the defence providing a screen.

Cagliari only lost two games the whole season and this meant that for the first time in Serie A history, the dominance of the Northern clubs had been broken.

Gigi Riva topped Serie A’s scoring charts for the third time and along with Domenghini, Gori and Cera, they formed part of the Italian squad that reached the 1970 World Cup final, losing to one of the greatest Brazilian sides in history.

As immense as “Gigi” Riva was, he was blighted by injures which involved breaking each leg and various muscle problems. But in testament to his character and talent, he is widely regarded as one of the best strikers Italy has ever produced. He remains the Azzurri’s record goal scorer with 35 goals in 42 games.

Cagliari have never replicated the success they enjoyed during the legendary season of 1969-70. They were a team that combined so many qualities; Scopigno and his tactical vision, Cera and his defensive leadership, the pace of Nene and Domenghini on the wings, the creativity of Gori and Greatti and of course the goals of all-time great Gigi Riva. This blend created the perfect storm. Unfortunately for fans of Cagliari, it has never been repeated.