Also known as the Marassi, the Stadio Luigi Ferraris is one of the oldest in Italy. Built in 1911, the stadium was originally property of Genoa and was the stage of their early titles won during Serie A’s primitive years.The stadium is a daunting place. With the crowd close to the pitch, it gives the players the feeling they are enveloped in a wall of noise and fire. One of the best examples of the atmosphere in the ground is evident during the derby della lanterna in which Sampdoria take on Genoa. Arguably one of the most passionate derbies on the Peninsula, it transforms the stadium into a cauldron.

Marcello Lippi has claimed that the game is “the most special in Italy”. In these matches Genoa hold the Curva Nord with their Ultra groups such as the Fossa dei Griffoni, while Sampdoria take the Curva Sud with their Ultra groups, which include the Ultras Tito Tito Cucchiaroni.
​
The last derby was one of the games of the season and the atmosphere and choreography were breathtaking. The stadium had been updated for the 1990 World Cup and you may remember it from the second-round penalty shoot-out between Ireland and Romania. It still is one of the best stadiums in Serie A. 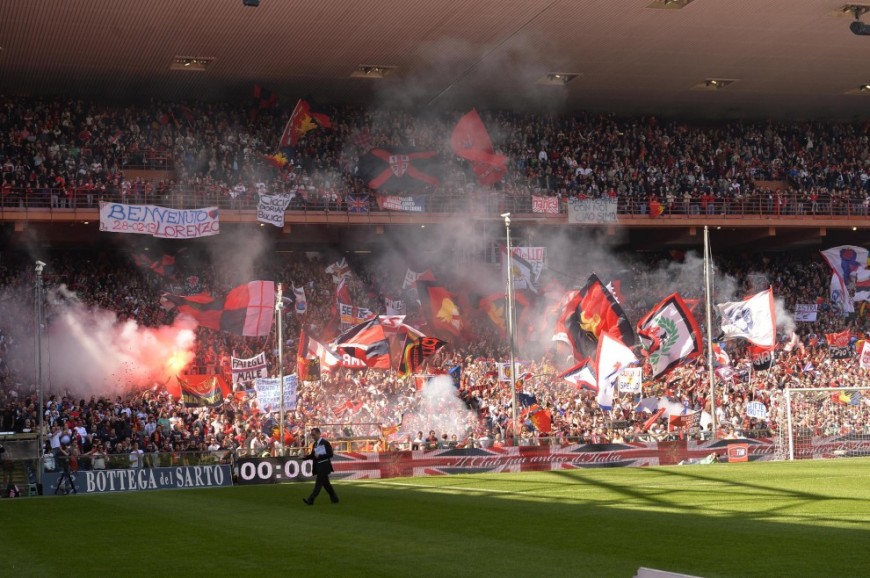 In the 1990s, during the Derby della Lanterna (the derby of the lighthouse), the red and blue half of the Stadio Luigi Ferraris unveiled a banner reading “We are Genoa”. It was a banner of mammoth proportions engulfing all the supporters in Genoa’s Gradinata Nord – a flight of steps resembling the end of an English stadium rather than an orthodox Italian Curva.

That the Luigi Ferraris appears anglicised and the banner itself was in English is entirely appropriate. It was a declaration of pride in the club’s long history, which started in 1893 when British Consular officials set up the Genoa Cricket and Football Club. It also served as a mocking reminder to their opponents and city rivals Sampdoria, born 53 years later in 1946, thay Genoa was the club with the prestigious footballing past, both as the oldest team in Italy and as the beating heart of the city.

Wedged between the Ligurian Sea and the Apennine Mountains, the city of Genoa is a sight to behold. Steeped in history and cultural splendour, the Genovese take fierce pride in their city, hence its nickname “La Superba“.

They are also known to be tough, resourceful and reserved. However, when the weekend arrives and theGrifoni (Griffins) grace the Luigi Ferraris, this reticence is lost in a tumultuous atmosphere that can produce some of the most spectaculartifo (fandom) Italy has to offer. As journalist Marco Liguori puts it: “If you speak about trophies in Italy, the teams that have become legend are Juventus, Inter and Milan, but if you speak instead about fandom, it is theGradinata Nord of the Marassi that is legend.”

The history of Genoa’s support is inextricably linked with the formation of their first Ultra group Fossa dei Grifoni (FdG) (Griffins Den) in 1973. Fossa was part of the supporters group Ottavio Barbieri, which was named after the former Genoa player. Both groups were born out of a dark era in the club’s history, when they languished in Serie C. FdG embodied the soul and ancestry of Genoa, combining British characteristics of sustained organised chanting with the breathtaking choreographies of Italian fandom.

Having established a real sense of unity, the Ultras’ heyday came in the late 1980s to early 1990s, when coach Osvaldo Bagnoli led the Rossoblu to a fourth-place finish in Serie A and European qualification. Genoa’s trip to face Liverpool in the quarter-final of the Uefa Cup in 1992 is fondly remembered for the vociferous and powerful support at Anfield. The Genoa fans were applauded by the Liverpool supporters at the final whistle.

In 1993, protests against the then-president Aldo Spinelli as well as strained relationships with the local press and police led to the disbanding of the FdG. Former members dispersed and joined groups such as Ottavio Barbieri, while others created splinter groups like Vecchi Orsi (Old Bears). Now Via Armenia 5r (5r Armenia Street), who are accompanied by the banner “You’ll never walk alone” are the vanguard of the Gradinata Nord. I Figgi do Zena (Sons of Genoa) also produce some impressive choreography, having taken their place in a section of the ground which traditionally had a more serene atmosphere.
​
Unfortunately this zealous fanaticism can lead to ignominious acts of violence. On 29 January 1995, a match between Genoa and AC Milan was marred by tragedy after Genoa supporter Vincenzo Claudio Spagnolo was fatally stabbed. The culprit, Simone Brasaglia, was a member of AC Milan’s notoriously violent fringe Ultra group, the Barbour Gang (a reference to the British styled coats they wore). When news of the stabbing spread, the game was cancelled at half time and riots broke out around the Marassi, with Genoani seeking vengeance.

Calcio reeled and the following week’s league fixtures were postponed. The incident sparked the first ever national Ultra gathering in which groups pleaded for an end to the use of knives and mindless attacks. Brasaglia was sentenced to 16 years in prison and a monument in memory of Spagnolo was subsequently erected outside the Marassi. Political backlash was also swift. A new anti-violence decree was implemented that attempted to subjugate organised fans; however this didn’t stymie their considerable power inside the stadiums.

On 22 April 2012, Genoa hosted fellow relegation strugglers Siena. What unfolded was truly unfathomable. With the Grifoni trailing 4-0 early in the second half, a group of Genoani launched flares on to the pitch and clambered up on to the tunnel and fences towards the locker room. The players were effectively held hostage and the referee was forced to abandon the game.
​
The Rossoblu captain, Marco Rossi, attempted to negotiate but was met with demands that the players hand over their shirts as they were deemed unworthy of wearing them. After consulting with club president Enrico Preziosi, who by now had joined the players on the pitch along with a host of stewards and police, Rossi began to collect the shirts. It was a moment that evoked a certain pathos, with some players reduced to tears.

Giuseppe Sculli was having none of it. Known to be the grandson of a notorious Calabrian mafia boss and bolshie at the best of times, he refused to hand over his shirt. After a passionate exchange, the player and the Ultras embraced and the game eventually resumed.

The Ultras had halted a top flight game (neither the first nor the last of such incidents), but it was the revelations that followed that beggared belief. While Genoa were hit with a hefty fine, Sculli was banned after accusations of having prior knowledge of the Ultras’ protest; his apparent heroism was a sham. Whether it is true or not, the story shows the power and sway held by the Ultras.
​
Despite such incidents, the supporters have been unwavering and the atmosphere produced at the Marassi can often stun and awe. Their fealty has not gone unnoticed and in an ultimate tribute the club retired the number 12 in honour of the supporters. They are both figuratively and literally Genoa’s 12th man and this is encapsulated in their motto: “Support Genoa when they win but love them when they lose”.

Tomas Skuhravy first exploded on to the world stage at the 1990 World Cup in Italy. The Czech striker showed his predatory instincts by scoring five goals and helping his team reach the quarter-finals.

His ability to score with his feet and his head saw him finish second top scorer in the tournament, a feat not missed by Genoa, who snapped him up in time for the 1990-91 Serie A season. His hat-trick in Bari against Costa Rica in the second round typified him as a striker.

At Genoa he linked up with the Uruguayan, Carlos Aguilera, with whom he formed a venomous partnership. They managed to score 15 goals apiece in Skuhravy’s first season in Italy. The Rossoblu finished fourth that year and went on to reach the semi-finals of the Uefa Cup in the subsequent season.

Skuhravy was a special breed forward: an old-school finisher. His only aim was to score and it did not matter how the ball reached the net. Goals were his lifeblood and it meant as much for him to slide in and push one over the line or head in a deflected shot, as it did for him to piledrive in a screamer from 20 yards. There was no emphasis on trickery, little interest in the spectacular, and an indifference towards bravado: the Czech vulture only talked in numbers.

Skuhravy’s heading ability was also one of his trademarks When Genoa were awarded a corner in the early 1990s, fans would feel that tingling of anticipation that the rest of us only get with a well-placed free-kick. Skuhravy would win the header so often than, even if he did not score directly, he would more than likely set up someone else. Many opposing fans were left with nightmares about a tall man with long hair in a Genoa kit wheeling away with both arms in the air.
​
He went on to score 59 goals in 164 games for the club, making him one of the most prolific goalscorers in their modern history. He would later return to Genoa to work as a TV pundit, nightclub owner and a youth team coach. Back in the 1990s, when Calcio ruled the world, a 6ft 4in Czech was causing havoc among some of the best defences in Italy.