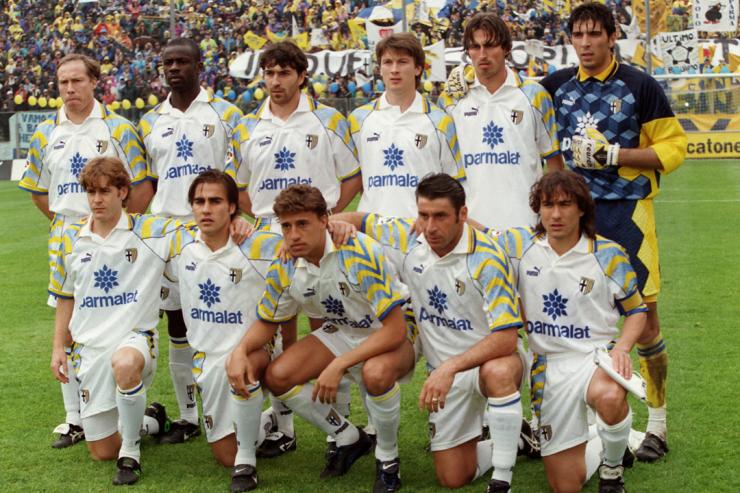 Designed by German sportswear giants Puma, this iconic jersey made its debut in 1995. It would be the last time Parma sported the all-white home shirt, as in 1997 they adopted the yellow and blue hoops for which they became famous during the glory days of the late 1990s.

In comparison to previous years, the kits colour scheme was more vibrant. Parma now had bold yellow and blue fading horizontal stripes down both sleeves along with the large elasticated stitched collar that could be found on many iconic shirts of the era.

Puma also spruced things up a bit by adding the large eye catching logo above the name of Parma’s main sponsor and backer, Parmalat. The shirt was complimented by white shorts which had the matching yellow and blue design of the shirt on both sides and all white socks.

Fans would see their hero’s turn out in this kit as Parma’s sixth consecutive Serie A campaign began. The summer of 1995 was a time of change at the Gialloblu after the club’s defensive stalwarts, Lorenzo Minotti and Alberto Di Chiara, left the club. A disappointing season followed for Nevio Scala’s men as they finished sixth, failing to build on the previous season’s fourth placed finish.

Despite the disappointment, this shirt will always be remembered for the day a superstar was born. On November 19, 1995, Parma hosted AC Milan at the Stadio Tardini. It was on this day that a baby-faced Gianluigi Buffon made his debut in the Parma goal. The rest, as they say, is history.

However, the shirt is best renowned for the 1996-97 season. New coach Carlo Ancelotti had recruited reinforcements in the shape of Lilian Thuram, Enrico Chiesa and Hernan Crespo and what an impact they would have. Parma ran Juventus excruciatingly close as Ancelotti’s men finished just two points off the Champions, with new signing Enrico Chiesa topping the clubs scoring charts.

Parma have always had eye-catching kits but this particular strip will live long in the memory due to its association with a side who almost clinched a historic first Scudetto for the Parmigiani.