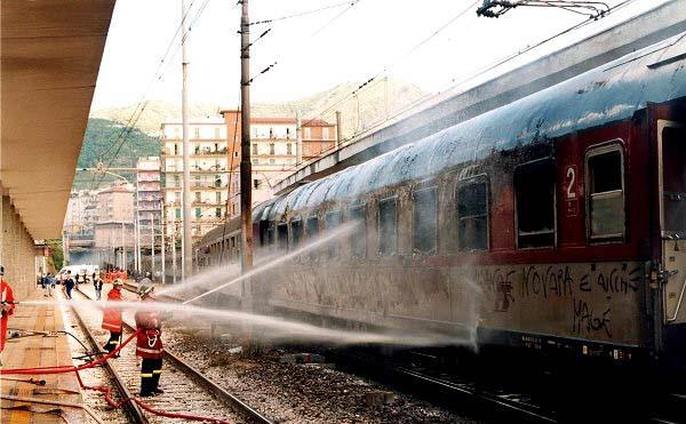 Wandering through country festivals in central Italy, it’s easy to see stalls of someone from Campania selling second-hand clothes, flawed shoes, unsold stocks of old football kits and so on. Even today, among all these goods, it’s not unusual to find the Exigo-sponsored garnet jersey of U.S Salernitana’s 1998-99 season, a relic that brings with it a very long story. A story made up of dreams and hopes, but also of dark pages which hold the worst side of Italian football.

Being their first time in Serie A since the 1947-48 season, the 1998-99 campaign caused quite a stir in Salerno, bringing to the surface the dormant passions of the city, both good and bad.

Emotions were tested, especially early on. Despite boasting a squad which included the likes of Marco Di Vaio, Rigobert Song and a 20-year-old Gennaro Gattuso, Salernitana found themselves 16th in the table by the end of the year, the only notable result coming in a 1-0 win over Lazio. In January, after a harsh defeat against Vicenza, chairman Aniello Aliberti decided to change something: coach Delio Rossi was to be replaced by Francesco Oddo. At least this was the plan he had in mind, but he hadn’t considered the madness of Salernitana supporters.

On 12 January 1999, when the chairman was announcing the news to the team after a training session at Saragnano, a group of ultras reached the sports facility, trying to break in using violent means. When the team came out, the enraged crowd started to insult all of them, chairman included, accusing the players of having ‘betrayed’ Delio Rossi. The young forward, Vincenzo Chianese, was even kicked on his back and, amidst a storm of spits and curses, players and management were forced to rush to their cars and flee from the tumult. But the worst was yet to come.

A few hours later, the chairman was presenting Francesco Oddo in front of the cameras, when a group of one hundred ultras burst into the press conference room, aggressively voicing their displeasure at the club’s decision whilst staunchly defending Delio Rossi. The desk was overturned, Aliberti was physically attacked and everybody, with the help of security forces, had no choice but to flee once again.

The situation was untenable. Oddo understandably gave up the task and Delio Rossi remained as Salernitana’s head-coach. The Ultras had won, but the lowest point of the Granata season had yet to arrive.

On the field, the team had showed signs of a reaction, beating Roma, Empoli, Sampdoria and playing out a thriller at the San Siro against Milan, although losing 3-2. By the end of March, Oddo finally replaced Rossi, this time without any disruptions or upheaval. Under his guidance, Salernitana demonstrated they were a team that still had what it took to avoid relegation: notable wins over Inter and Bologna were proof as much.

The last four matches of the season were crucial to determining the fate of the Cavallucci Marini. The first was a success: in a packed Arechi Stadium, Salernitana produced a perfect performance to topple Zidane’s Juventus thanks to a Marco Di Vaio goal. This kept the fight with direct relegation rivals – mainly Piacenza and Perugia – open. But it wasn’t over yet.

A week later, a defeat against Cagliari plunged Salernitana into trouble once again. But this was soon followed by a victory over Vicenza on 16 May. One game remained against Piacenza. The Granata had to win and hope that Perugia – sitting two points above them in safety – would fail to beat AC Milan. A Perugia victory was indeed highly unlikely, with the Rossoneri needing a victory to secure their sixteenth Scudetto. And this was confirmed by the goals of Andrés Guglielminpietro and Oliver Bierhoff, ensuring Milan left Umbria with a 2-1 victory.

While Rossoneri fans were uncorking bottles to celebrate the title, a completely different battle was taking place at Piacenza’s Leonardo Garilli Stadium, 400 kilometres from Perugia. Piacenza versus Salernitana was a match like few others; one of those where stories, fate, subplots and absurdities intersected each other. Subplots like that of the two coaches, Giuseppe Materazzi and Francesco Oddo, who could have never imagined that destiny would ensure that, eight years down the line, they would rejoice together after watching their sons Marco (Materazzi) and Massimo (Oddo) raise the 2006 World Cup in Berlin.

It was also a strange match in the worst sense. Garnet-coloured supporters watching on saw a team that wanted to win the match, but absurdly expected to do it without attacking. In the first-half, all that Salernitana mustered was one attempt on goal – a header by David Di Michele. Piacenza weren’t in any rush either. But they weren’t the ones in need of the three points, and so kept on playing in a prudently cautious manner.

Suddenly, on 53 minutes, 40-year-old Pietro Vierchowod headed in the last goal of his legendary career from a corner kick to put Piacenza ahead. Salernitana finally showed some form of reaction, attacking with urgency and forcing a penalty that Salvatore Fresi turned into the 1-1 equaliser.

From that moment on, it was the festival of foolishness: Serie B was just half an hour away, but Salernitana didn’t even try and win the match. It was as though they thought they were already safe. The Granata didn’t threaten Piacenza’s goal again till stoppage time. By then it was too late. Time was up.

At the end of the contest, the truly bizarre unfolded. Fresi went to the referee to complain about a penalty that hadn’t been awarded to his side late in the game. After this barrage of fruitless protest, he went to Vierchowod. His actions were incomprehensible. The Salernitana player allegedly ‘accused’ the opposite defender of having scored the goal that condemned them to relegation – suggesting that Vierchowod should never have found himself in that position in the first place. Madness reached its peak when the confrontation went from words to punches, and most of the players on the pitch followed suit. Policemen had to carry the referee away to prevent him from being hurt, and the fight went on into the tunnel, marking for one of the saddest season finales in Italian football.

Together with the players, the Ultras also descended into a red mist. Angered by what they had witnessed on the field, while their players destroyed their changing room in the Garilli Stadium, the Ultras decided to wreck everything in sight: including cars, dumpsters and shop windows.

Sadly, this was not enough to satisfy their longing for destruction. On the special train that was bringing them home, some of the Granata supporters, after having wrecked seats and windows, started a fire that reduced some coaches to a burning hell on rails. Four young Salernitana fans lost their life in a railway tunnel not far from Salerno. The dark underbelly of their support had been brutally exposed for all to see. One of the blackest pages in Salernitana and Italian football history had been written.

ranco is a son of Rome who grew up admiring Totti’s assists and chasing a ball through the streets of the capital’s suburbs. Now he spends most of his time watching football matches, regardless of the league, the country or the level. He also writes for @JustFootball.