Rome’s famous Stadio Olimpico is well-known for being the home of SS Lazio and AS Roma. Two times a season, this modern-day colosseum is the setting for one of Italian football’s fiercest rivalries. However, less well-known is the dark history behind this iconic sporting arena.

Constructed between 1928 and 1938, the Foro complex, which includes the Stadio Olimpico, was designed in typical fascist era style. Inspired by the Roman forums of the imperial age, it was designed by Enrico Del Debbio and, later, Luigi Moretti. Fascist architecture drew its inspiration from classical Roman buildings, but while Roman design had ornate details and rounded edges, fascist buildings were generally cold and forbidding. Symmetry, straight lines and simplicity were the order of the day. 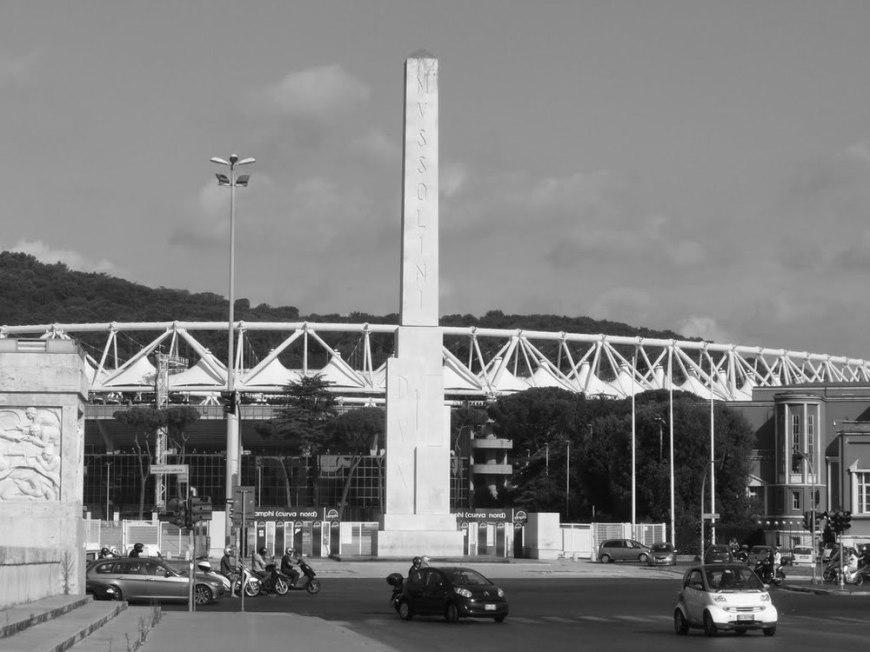 ‘Mussolini Dux’: The imposing obelisk dominates the landscape next to the Stadio Olimpico

Foro Italico was originally known as Foro Mussolini. The Italian dictator had been quick to recognise the potential power of sport in achieving political and ideological ambitions such as, in the case of fascism, national unity and international prestige.Whether it was physical exercise as a form of militarism or great sporting occasions as the true opiate of the masses, Mussolini’s fascist regime embraced sport in all its forms. The dictator himself was frequently seen on newsreels riding, swimming and playing tennis, no doubt all carefully choreographed to emphasise his strength, vigour and youthfulness. It is no coincidence that Italy won back-to-back world cups in 1934 and 1938 (a dark “golden era” for fascist sport). Such sporting achievements were celebrated as proof of the superiority of the Italian race and of the fascist ideology.

Throughout Italy, the fascists built modern football stadiums as permanent monuments to their industrial competence and sporting superiority. The “Mussolini” stadium in Turin, the “Littoriale” in Bologna, the Stadium “della Vittoria” in Bari, the “Berta” in Florence, the “Edda Ciano Mussolini” in Livorno and the “XXVIII Ottobre” in L’Aquila”. As John Foot argues in Calcio – his comprehensive history of Italian football – these new stadiums provided evidence of the economic progress made under Mussolini and demonstrated the industrial might of fascist-run Italy.

From 1929 until 1940, AS Roma were playing their home games in a small wooden stadium in the working-class district of Testaccio. The atmosphere was said to be extremely intimidating and these were generally successful times for the Giallorossi. In 1940, they moved to the Stadio del Partito Nazionale Fascista, and it was here, rather than at the Stadio Olimpico, in the 1941-42 season that Roma won their first ever scudetto, albeit in somewhat dubious circumstances. It wasn’t until the 1953–54 season that Roma moved to Stadio Olimpico, which it now shares with fierce city rivals Lazio.

Of course, the Stadio Olimpico has undergone various upgrades, redesigns and re-brandings since the fascist era, most notably for the Olympic Games in 1960 and the era-defining World Cup of 1990, for which it was almost completely demolished and rebuilt. The stadium underwent a further programme of modernisation to host the 2009 UEFA Champions League Final (in which Barcelona beat Manchester United 2-0). Following these improvements, the stadium was reclassified as a UEFA elite ‘Category 4’ stadium.

Despite its various reincarnations, Foro Italico remains one of the preeminent examples of surviving Italian fascist era architecture.And while it may be argued that such remnants have no place in modern sport, it is difficult to deny the aesthetic beauty and efficient functionality of the Foro. A sporting centre of excellence that hosts not only the national stadium, but also two Serie A clubs as well as CONI – the Italian National Olympic Committee. It also has an Olympic swimming complex, athletics stadium and tennis courts.

And as for the Mussolini Obelix, more than anything else, it stands as a lasting reminder of the perils of fascism and the tragic absurdity of its vainglorious leader. ​

Richard is a teacher, researcher and writer, blogging and tweeting from Verona about history, football, culture and travel. He has also been published in the Guardian Sport