Few events are truly unprecedented in football, but what happened during Italy’s 1982 World Cup campaign in Spain was just that, and its legacy endures to this day.

In Enzo Bearzot, the Azzurri had a coach who did things his own way and never bowed to public pressure. As a player, he had established himself as a tireless mediano (holding midfielder), playing for the likes of Inter and Torino. Bearzot only made one appearance for the national side, which came against Hungary in Budapest in 1955, where even in defeat he shone, man marking the legendary Ferenc Puskas.

Nine years later, a coaching career started at his former club Torino. Within three years, he was part of the national team setup as a youth coach. He travelled as assistant coach to Ferruccio Valcareggi to the 1970 and 1974 World Cups, held in Mexico and West Germany respectively. Just a year before the 1978 edition, Bearzot was appointed as head coach despite never having coached in Serie A.

The critics, however, were not convinced. Many thought he was out of his depth, with fans and journalists even declaring him scemo, ‘stupid’. Yet the pressure never got to Bearzot and he named a youthful squad for the World Cup in Argentina, including forward Paolo Rossi. Despite the scrutiny, the Azzurri excelled finishing fourth, and two years later at the European Championship, the feat was matched. Bearzot had established a fine side capable of matching the best.

On the eve of the 1982 World Cup in Spain, selection once again dominated proceedings. Rossi had been banned from football for three years (later reduced to two years) for his part in the ‘Totonero’ match-fixing scandal that rocked Italian football. Before the scandal broke, Rossi had been Italy’s star player and the toast of the country. Now he was tainted by guilt. Yet despite this, Bearzot stuck to his guns and selected the Juventus forward for the tournament in Spain. This meant Roma’s Roberto Pruzzo, who had been Serie A’s top-scorer during the previous campaign, missed out on the squad altogether, which only magnified Beatzot’s decision to select Rossi.
​

Bearzot with his customary pipe and his coaching staff, including Cesare Maldini (left)

The under-pressure Azzurri and their coach needed a good start to the tournament. Instead, they got the exact opposite. Italy limped through their group, drawing all three matches against Poland, Peru and Cameroon. The pressure only increased. After the second game with Peru, which finished 1-1, Antonio Matarrese, president of the Italian league declared, “This team is a disgrace. I want to go down to the dressing room and kick them up the backside.”
​
Rossi in particular was singled out for criticism. He was a ghost of his former self and failed to make any impact. The same questions were being asked by the media day in, day out: how has the two-year absence affected his career? Will he score in the tournament? Should he even be in the team?And Rossi was not just being scrutinised on the pitch. After pictures emerged of Rossi and teammate Antonio Cabrini bare chested on a balcony at the team’s hotel, the Italian media went into a frenzy. Rumours began to emerge suggesting the pair were having an affair. They were accused of not being ‘real’ men. Il Giornale reported the two Juventus players had slept together like husband and wife. Bruno Conti, a key member of Bearzot’s squad explained, “The most horrible rumour was that Rossi was with Cabrini, and that players were taking drugs and drinking late into the night.”

That was not all. It was revealed that each player received an appearance bonus of 70 million lire. Given the abject performances of the players, the merits of these bonuses were called into the question. The newspapers argued it was a huge amount of money to reward players for draws against minnows such as Peru, even suggesting a disaster similar to the infamous defeat against North Korea 16 years earlier was transpiring. At this point in time, many in Italy were anxious about the direction football was headed. Some believed players were being paid far too much and that the traditions of the game were being lost.

In many ways, Bearzot himself was one of them. Italians warmly referred to him as il Vecio, the old man. After he gave up coaching, he distanced himself from Calcio. He never appeared on television or even attended matches toward the end of his life. The culture of ex-players and coaches being so critical of their contemporaries saw him fall out of love with footballl, while he also questioned other aspects of the modern game, including the increasing importance of money.

Yet in 1982, the Azzurri coach was firmly on the side of the players. He gave his blessing when the squad formed a union and most significantly, he agreed to boycott the press. Dino Zoff would speak on behalf of the squad and that was it. “It was a hopeless situation,” the legendary goalkeeper recalled. “Every press conference turned into a court room.  Anything we said was turned against us. We had to concentrate on the football and nothing else.”
​ 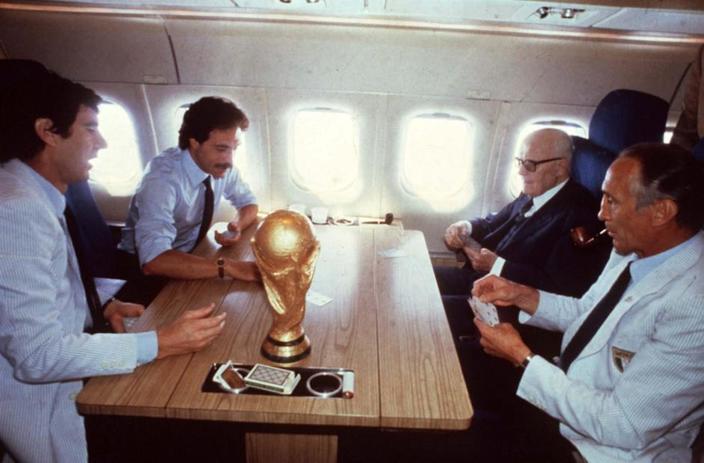 There had been previous, one-off, occasions in which teams and players had refused to speak to the media. But such a uniformed strike was unheard of. ‘Silenzo stampa’ had been born and the siege mentality was set. For most people, this was the turning point in Italy’s campaign, allowing the squad to concentrate on training without the pressure of endless media surveillance and scrutiny. “I think it saw us come together,” Zoff later reflected, “It made us more united and brought the best out of us. We needed miracles and it helped us achieve them.”

Following qualification from the first group stage, Italy found themselves in the original group of death, alongside pre-tournament favourites Brazil and Diego Maradona’s Argentina. Nobody gave the Azzurri a chance. But Bearzot had forged a strong group in the face of adversity. His philosophy of ‘la forza del gruppo’, or ‘group strength’, had been entrenched in his players.

In a more relaxed mood, Italy expressed themselves. The shackles were off and the team never looked back. The transformation was clearest in Rossi. Having failed to score during the first group stage of the tournament, the Juve star netted a famous hat-trick to secure a 3-2 victory over Brazil and more importantly, qualification to the semi-finals. In the previous match, Claudio Gentile had nullified the threat of Maradona as the Azzurri scraped a 2-1 win against Argentina, their first victory of the tournament. After the game, however, the players were still enraged with the press and some members of the squad even tried to confront journalists.
​
Having emerged from the hardest of groups with two wins, Italy were now a different proposition. Rossi himself explained the transformation:
​

When we went on to play Argentina and Brazil, we had no fear and we were playing with pride. We knew that we had to give it our all and left our inhibitions in the changing room. For me and the team it is like we had started again.

Paolo Rossi in action against Brazil.

With a new-found belief, Italy eased past Poland and West Germany to claim a third World Cup. After a dreadful start to the campaign, Rossi would be crowned top scorer and awarded the Ballon d’Or at the end of the year. In the aftermath of the final in Madrid, relations with the media were still tense. Bearzot was invited to hold a press conference but he did not forgive his side’s tormentors and instead questioned their integrity.
​
Out of Italy’s four World Cup wins, their triumph in Spain is generally remembered most fondly by the Italian public. It is thought to have embodied the Italian spirit; a triumph forged by adhering to the true principles of the game. The proliferation of international stars in Serie A, coupled with huge wages and a commercialisation drive has led many fans to believe the core values and unity of Bearzot’s side have been lost.
​

Italy celebrate their 1982 World Cup triumph, with Bearzot head and shoulders above the rest.

However, coaches in the Italian game still look to il Vecio as an example, and ‘silenzio stampa’ has not lost its appeal. In fact, it is being used now more than ever, employed as a tactic to foster unity and create a siege mentality against all those who doubt the team.

Jose Mourinho and Antonio Conte used a media boycott to great effect when they were in charge of Inter and Juventus respectively. Both teams would go on to dominate Italian football, owing much to their cohesiveness as a group and ‘us against the world’ state of mind.

But silenzio stampa does not always have the desired outcome. Roberto Mancini and Walter Mazzarri both adopted the approach whilst their respective Inter sides were struggling, as did Claudio Ranieri during his time at Roma. However, instead of galvanising the team, it accentuated divisions and created more pressure. It is unsurprising that all three coaches lost their jobs shortly after a silenzio stampa was called. In short, the tactic can either be the last roll of the dice for a coach, or a calculated move to get the best out of their side.

“I believe in the spirit I’ve infused in my group of players,” Bearzot declared of his class of 82’. Not only did the legendary coach bring Italy a historic and surprise World Cup win, but also a philosophy which is still sought after to this day. Thus, silenzio stampa will continue to be adopted by coaches across the peninsula as they search for the much vaunted ‘forza del gruppo’.

Richard has been an avid follower of Italian football since the turn of the century and in particular Roma’s dramatic final day Scudetto triumph. A Yorkshire man with Calabrian roots, he is passionate about writing on all things calcio, from its historic players to current issues.