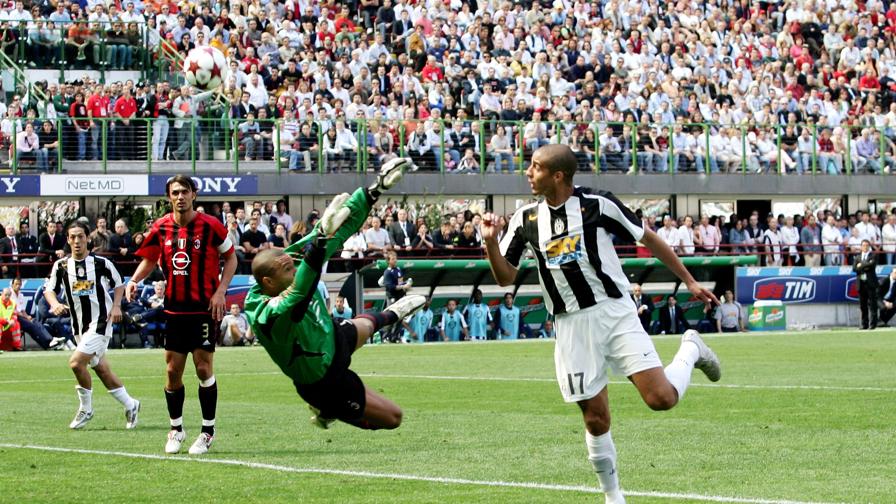 Juventus vs. Milan; it may seem strange that despite both clubs historically being Italy’s two most successful and important sides, in the past 25 years there hasn’t been many seasons in which both have contested for lo scudetto. Usually, there have been periods in which Milan were strong and Juve weren’t (1991-94) and vice versa (1995-98), or indeed a time when neither were particularly strong (2000-02).

However, for two seasons in the mid-2000s, both teams had built formidable squads, led by two titans of the Italian game. Juve had come under the stewardship of one Fabio Capello in the summer of 2004, following the meek ending to Marcello Lippi’s second stint in charge. Capello, who had vowed when coaching Roma that he would never coach The Old Lady, went back on his word and signed for his former club in the middle of the night to avoid detection from the media, and a probable lynching from Romanisiti.

Capello wasn’t to come alone and brought Emerson from Roma with him, much to the chagrin of Giallorossi fans. Perhaps a stinging realisation was seeping in that the good times of the previous few years were now at an end.

Milan by contrast had enjoyed a steady ship under Carlo Ancelotti since 2001. The former Parma and Juve tactician had managed to weave his way through a rocky start at Milanello and by 2003, they had become champions of Europe for the sixth time, beating Juve on penalties. A year later they had won their first league title for five years and in Andriy Shevchenko, they had the games’ deadliest striker. The Ukrainian had won the 2004 Ballon d’Or and was at the pinnacle of his almighty powers.

The 2004/05 season saw Juve and Milan occupy the top two spots from October onwards and despite flying into a six point lead early in the season, by the beginning of January Juve’s lead had been whittled down to two points. February, March and April saw both sides swapping places at the summit, both relentless in their pursuit of each other. It was making for a gripping title race, the first Italy had experienced since Lazio’s title win in 2000.

The two were set for what would ultimately be a scudetto showdown on 8 May 2005, and with only three fixtures remaining, it was highly probable that the winner of the match would secure the title. It couldn’t have been scripted any better.

8 May proved to be a typically glorious Milanese spring day. As Juve rolled into town both teams were equal on 76 points. The hosts had narrowly scraped through to the final of the Champions League four days previous, seeing off PSV Eindhoven on away goals after being outplayed in Holland. Juve had been eliminated at the quarter final stage by Liverpool and thus had little distractions in the run up to the game.

Given the events that would transpire for both teams later in the decade, the star power on display here was simply outrageous, especially the quality running right through Milan’s side. The Rossoneri had such a star-studded squad that they were in a position to leave Manuel Rui Costa, Hernán Crespo and Pippo Inzaghi on the bench.

In truth, the game was a very tight affair, lacking any real spark. The combination of Milan playing in Europe mid-week and Capello’s dour-yet-effective brand of football ensured the match was never going to be one for the purist. However, there was one strand of genius, and if the Juve head-coach had had his way, it wouldn’t have happened at all.

Zlatan Ibrahimovic – signed on the last day of the summer transfer window – was Capello’s first choice starter alongside David Trezeguet for much of the season. Ibrahimovic was retrospectively suspended for the title decider after being caught on TV in clashes with Inter’s Ivan Cordoba and the usually polite Sinisa Mihailjovic in a 1-0 loss in mid April. The Swede was banned for three games.

Capello had waged a war with Alex Del Piero all season. Much like Arrigo Sacchi and Giovanni Trapattoni, Capello had little time for fanciful no.10s. The star of the team was tactics; you either pulled your weight defensively or found yourself marginalised. Del Piero was either substituted (he was taken off a record 26 times that season) or he was dropped. Yet with no Ibrahimovic, Capello had little alternative than to pair him with Trezeguet.

Del Piero, a man who very rarely strayed from neutrality when it comes to publically talking about past coaches and players, was highly critical of Capello during that period. In an interview years after both men had left the club, Del Piero remarked, “my relationship with Capello was not rewarding from many points of view, not only because I was little used. We had a different way of seeing things”.

In the 28th minute, the encounter flashed into life. Stephen Appiah received the ball just outside his own box and strided some four or five yards before lofting a ball over to the left-hand side of the pitch for Pavel Nedved to chase. The Cezch raced towards the ball with Alessandro Nesta, who for some peculiar reason took it upon himself to try and win the ball from his former Lazio teammate. Nedved reached the ball first and kept it in play but was met with a crunching tackle that sent him hurtling to the ground over the touchline.

The ball travelled down the left-hand channel of the pitch where Del Piero took control. The gnarling menace that was Rino Gattuso charged over to greet him. Del Piero, however, easily skipped past him and made his way towards the box. Correctly sensing that Gattuso wouldn’t be too far behind him, he swivelled and twisted in an attempt to shake off the raging bull.

Del Piero made a yard of space and attempted to cross, but blocked by Gattuso’s leg, the ball spun into the air back towards the edge of the box. With the ball now behind him, Juve’s fantasista showed brilliant ingenuity, instantly turning to execute an overhead kick into the six-yard box. 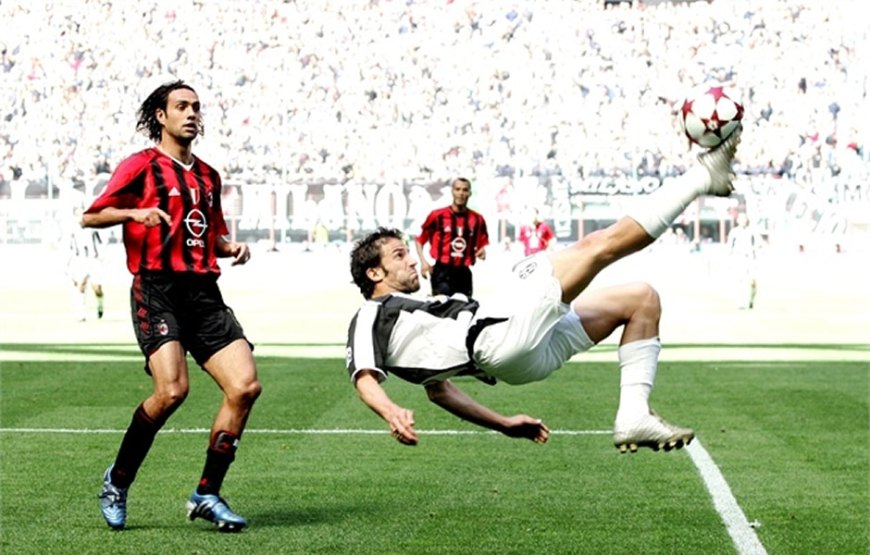 ​David Trezeguet, quiet in the match up to this point and ever the supreme opportunist, darted in front of Maldini – into the gaping hole that Nesta had left vacant by his earlier escapade up the field – to head the ball past an advancing Dida. The Milan stopper could only get a hand to the ball as it spun – almost in slow motion – into the net. Trezeguet celebrated and sunk to his knees to embrace the Juve no.10.

Del Piero and Trezeguet formed a deep bond during their ten years together at Juventus. When Trezeguet left the Bianconeri in the summer of 2010, his strike partner penned a public letter. Heaping praise on their accomplishments: together they outscored the legendary Sivori-Charles partnership, won multiple league titles and both won the Capocannoniere crown.

A measure of that bond can be found in the last game of the 2007/08 season. Both players were high in the Capocannoniere charts and in a game against Sampdoria, Del Piero had already scored a goal to send him top. Trezeguet was tied in second with Genoa’s Marco Borriello and in the second half Del Piero was awarded a penalty. Rather than take it himself, as was always the case, he gave the ball to Trezeguet so he could cement second place. The Frenchman duly smashed in the penalty and did indeed finish second, one goal behind Del Piero.

Del Piero’s moment of ingenuity represented redemption for the forward, admitting a few years later that had Capello remained as Juve head coach in the summer of 2006, he would have considered leaving Turin. “ With him (Capello) still on the bench it would have been very difficult for me to stay at Juventus,” he said.

It was a goal that might never have happened had Trezeguet got his way the previous summer. After four years in Turin and a bagful of goals, the Frenchman had wanted to leave Juve and talks were ongoing with Barcelona. Once Capello came on board and learned of the negotiations, he put a stop to the transfer instantly, and Barcelona turned their attention to Samuel Eto’o.

Trezeguet, a hugely undervalued player outside of Italy and France, wasn’t having his most prolific season. Injuries disrupted his campaign yet his goal ratio was one in two, a true mark of his deadliness in what was hardly a free-flowing side. Indeed, Capello’s Juve were the epitome of a functional outfit.

A shift was occurring in the European game during this period. Started by Jose Mourinho and later reinforced by arch nemesis Pep Guardiola, the centre forward role was evolving; scoring goals was no longer enough, strikers had to contribute more to the overall play. The last great goal predators, born in the mid to late 1970s – Trezeguet, Hernán Crespo, Ruud van Nistelrooy and Pippo Inzaghi – where the last emblems of a type of striker on the verge of extinction.

Trezeguet’s strike was enough to seal the win for Juventus, despite Milan pushing hard for an equaliser, and ultimately win the title. This game in retrospect marked a watershed moment in the recent history of Italian football, it represented the last time Italy had two super teams, collectively feared in Italy and in Europe, who both contested for the title.

Within a year, Serie A’s reputation would be severely damaged by the Calciopoli scandal, and another, often overlooked factor. The sale of Andriy Shevchenko to Chelsea – the league’s best player – sent a signal that the league wasn’t the place to be for the games’ finest players. The exodus continued over the coming years as Serie A became known as a ‘transitional’ league.

Trezeguet’s innate instinct was one last hurrah to the glory years. ​