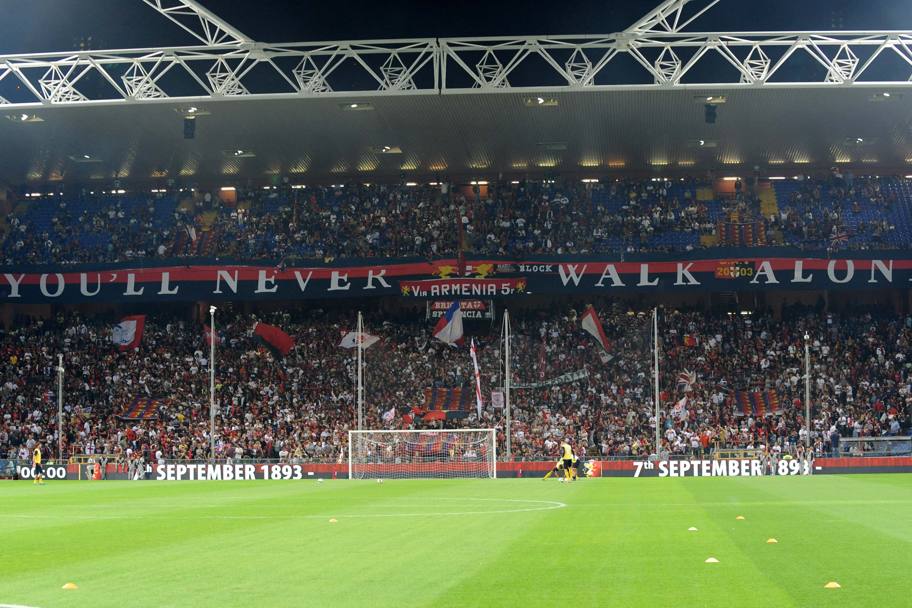 The sea has long shaped the port of Genoa’s destiny. From here, local navigator Christopher Columbus set out to seek sponsorship from the Spanish crown to find a new sea route to India. It’s also where Giuseppe Garibaldi set sail on his famous ‘Expedition of the Thousand’, a key moment in the Risorgimento.

In the late 19th century, hundreds of thousands of Italians left for the Americas through the port of Genoa. But crucially, certain people were coming into Genoa at the same time – a group of British merchants armed with a ball and a rulebook – and Italian culture would never be the same again.

The Via James Richardson Spensley in Genoa’s Marassi district is nothing to write home about. Flanked by two car parks, the street named after one of the founding fathers of Italian football is more of a driveway than a via and leads right up to Genoa’s Stadio Luigi Ferraris.

Spensley, a doctor from Stoke Newington in East London, arrived in Genoa in 1896. He joined the Genoa Cricket and Athletics Club – formed three years earlier by Brits for Brits – and set up the club’s football arm.  Eventually, this branch of the club would supersede athletics, and thus the organisation settled on the name Genoa Cricket and Football Club.

While Spensley is credited with setting up the first recognised footballing club in Italy, there is evidence that textile merchant Edoardo Bosio had returned from England to Turin a few years earlier and had already set about evangelising the game locally.

Certainly it was to Turin that Spensley looked to arrange matches early on. He organised the very first game between Genoa and Football Club Torinese, which was attended by a crowd of around 150 people. He was also player-manager for Genoa in the first Italian football championship in 1898, which Genoa won. The club won five more titles under Spensley before he hung up his boots. He went on to found the Italian scouting movement, another significant contribution to his adopted home.

The doctor was killed in action during World War I in 1915. Former player Luigi Ferraris, after whom Genoa’s stadium is named, was also killed in the Great War.

While one Englishman led Il Grifone (The Griffin) to the club’s first six Italian championships, it was another Englishman that brought in its other three titles. His name was William Garbutt, a former Arsenal and Blackburn Rovers winger whose playing career was cut short by a knee injury.

Garbutt would spend more than two decades in Italy with Genoa, Roma and Napoli. He is fondly remembered in Italy and credited with being the original mister, a term for football coaches that has stuck in Italy ever since.

His focus was on tactics and physical supremacy. He also became the first coach in Italy to conduct paid player transfers. Vittorio Pozzo, Italy’s coach for its two World Cup triumphs in the 1930s, described Garbutt as “the most important man in the history of Italian football”.

Garbutt’s final title with Genoa in the 1923-24 season resulted in the first ever awarding of the Scudetto, the Italian flag champions wear on their shirts for the following season.

A tenth title and the coveted gold star that accompanies it has proven elusive for Il Grifone nearly a century on.

The Italianisation of Genoa CFC

Genoa CFC’s badge features the Griffin from the city’s crest and the flag of St. George, but this has nothing to do with the club’s English roots. St. George was the patron saint of the old Republic of Genoa and was in use by the city long before England adopted the cross.

The club started out with white shirts reminiscent of the England team, but then migrated to blue and white stripes at the turn of the 20th century for just one season before settling on its familiar red-and-blue halves. The rossoblu had arrived, as did an increasing number of Italian and international players. The English influence was waning, on the pitch at least.

By the time of Garbutt’s – and Genoa’s – last title, Italian Fascism was gathering strength. Its nationalist drive Italianised the language of football, and Mussolini’s government forced Genoa to change its name to Genova 1893 Circolo del Calcio. The club was not alone; Internazionale of Milan became known as Ambrosiana during the Fascist era.

After World War II and the fall of Mussolini, the original name of Genoa Cricket and Football Club was restored.

For visitors from the UK or Ireland, a visit to the Stadio Luigi Ferraris will feel very familiar, albeit with added Italian colour and vibrancy.

It’s an intimate, British-style ground that hugs the pitch as a two-tier rectangle, in contrast to many of the multifunction stadia that you often find in Italy with a running track separating the stands from the field of play. This makes for an intimate – and often intimidating – atmosphere. It’s also part of the reason that the Genoa-Sampdoria Derby della Lanterna is so electrifying.

Genoa’s fans, I Grifoni, pump out a creditable rendition of “You’ll Never Walk Alone” before kick-off, joining the likes of Celtic, Liverpool, and numerous other European clubs to adopt the song.

I like the symmetry that it was a James Richardson Spensley that introduced the English game to the Italian peninsula, while a century later another James Richardson would introduce British audiences to Italian football in the form of Channel 4’s Gazzetta Football Italia. That’s certainly how I got to know Genoa, who were then a fairly potent side at a point in time when Sampdoria was at its historical peak.

Unfortunately for Genoa and its fans, the tenth scudetto looks as far away now as it has at has any point since Garbutt’s day. But the legacy of Genoese football lives on elsewhere and in an altogether more successful guise.

In 1905, a small group of Genovese among the thousands to settle in Buenos Aires clubbed together to form a football team. They named the club after the dock area they had settled in – Boca Juniors – and to this day Boca’s fans are known as Los Xeneizes: ‘The Genoese’.

Spensley’s influence crossed not only borders, but continents.