The last Englishman to win the football World Cup, certain wags will try to tell you, wasn’t born until 1977. You see, Simone Perrotta, the Roma and Italy midfielder and 2006 World Cup winner, was born in Ashton-under-Lyne. In fact, there is a statue in Ashton depicting Perotta, Geoff Hurst and Jimmy Armfield, the three men born in the county of Tameside to have won the World Cup.

Perrotta and his family returned to their native Calabria when he was only five years old and he does not seem to have seriously considered himself an Englishman. Of his brief time in Greater Manchester he said: “My father was in England for work and as a consequence I was born there, I have a few memories of Ashton but they are just flashes.” However, there was another player in that 2006 side who had more complicated national loyalties: Juventus winger Mauro German Camoranesi.

Camoranesi was born and raised in Tandil, Argentina and spent the first five years of his career playing in the Argentine, Uruguayan and Mexican leagues before moving to Verona at the age of 24. He was eligible for Italian citizenship through his great-grandfather, Luigi, who had emigrated in 1873. When the Azzurri came calling he elected to play for Italy, rather than the country of his birth, making his senior debut in a friendly in 2003. In short, he is a classic example of what in Italy is known as an oriundo: a foreign born player (typically, though not necessarily, from Argentina or Brazil) eligible to play for Italy as a result of their heritage.

Oriundi have a long and storied history in Italy that goes all the way back to before the Azzurri’sfirst World Cup triumph in 1934, when Vittorio Pozzo’s side included three Argentine oriundi in Luis Monti, Raimundo Orsi and Enrique Guaita. When challenged about the decision to select foreign-born players, Pozzo referred to their eligibility for Italian national service, declaring: “If they can die for Italy, they can play for Italy.”

In fact the oriundi fit snugly into the narrative of a burgeoning Italian nationalism. Finding it embarrassing that so many Italians were forced to emigrate in order to survive and prosper, in 1928 Mussolini had declared Italian emigrants to be Italiani all’estero (Italians abroad), thus depicting them as agents of a peaceful Italian colonisation of the Americas and the UK, rather than merely poor migrants driven from their homeland by poverty and famine. Accordingly, there was no contradiction in these men playing for Italy – their parents, and thus they themselves, had never ceased to be Italian, they were simply out of the country.

READ ‘Vittorio Pozzo and the Italian Assertion of Power’

The tradition of oriundi has continued through the likes of Camoranesi to the Brazilian born pair of Thiago Motta and Eder, who represented Italy in the 2016 European Championships. Recently, the Italian federation even tried, unsuccessfully, to persuade Juventus and Argentina forward Paolo Dybala to declare for Italy.

The practice is broadly accepted in Italy, though it is not without its controversies. As recently as March 2015 Roberto Mancini condemned the selection of foreign-born Italians though to no great impact. Complaints about oriundi tend to revolve around the quality of the players concerned, and what this has to say about the health of the national game, rather than the principle. This is understandable, surely a player born in Brazil or Argentina would want to play for the country of his birth if he could and if he isn’t good enough to do so why should a successful nation like Italy select him instead?

There is certainly some force in this argument: many recent oriundi such as Dani Osvaldo and Amauri were mediocre players; tellingly there were no oriundi in the strong Italians sides of the 1980s and ‘90s unless you count Roberto Di Matteo (born in Switzerland to Italian parents), which most Italians do not.

In contrast, there is no comparable tradition in English football and this practice can appear odd and even a little sordid, defeating the purpose of international competition by allowing nations to lobby for talented players to play for a nation they may only have a tangential connection to.

Part of the reason for this contrast is simply a practical one. The English diaspora, to the extent that such a thing exists, is largely situated in former colonies such as Australia and New Zealand where a talented young sportsman is much more likely to pick up a cricket bat or rugby ball than start kicking a football. This is certainly borne out by the selection of foreign-born players in recent English rugby union and cricket sides although a number of those players, but by no means all, moved to England at a young age. However, there is also a deeper explanation for this difference which reflects the history and culture of the two nations and how they deal with issues of national identity. 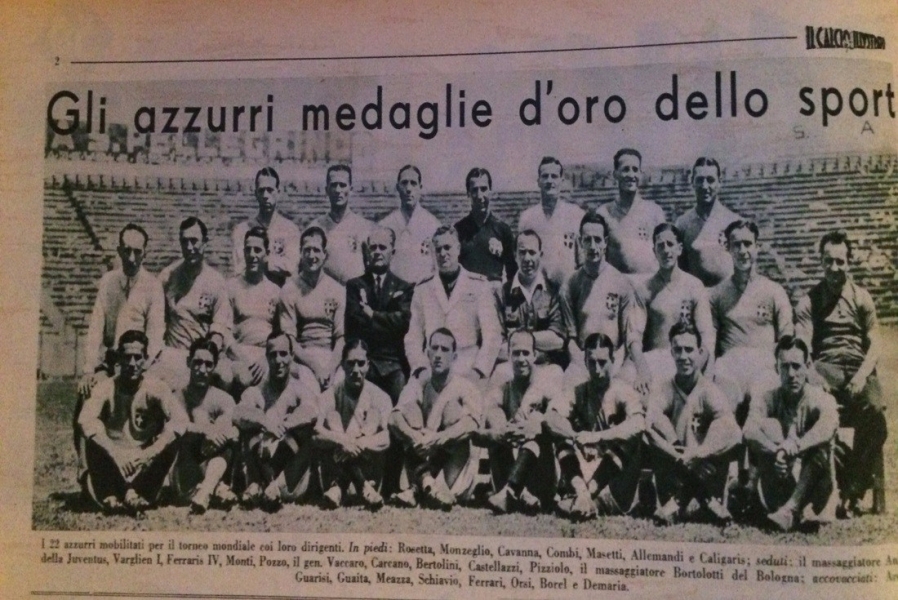 READ ‘Argentinians and Italy (Part I): The Oriundi and the 1934 World Cup‘Italy has a Ius Sanguinis (the right of the blood) approach to nationality while the UK has a Ius Soli (the right of the soil) regime. What this means is that children of an Italian citizen are automatically Italian, regardless of where they are born in the world. This is fairly typical of countries with large numbers of emigrants including Ireland and Mexico. Part of the reasoning behind this approach is to protect emigrants and their families from persecution abroad by allowing them to claim nationality of the mother country and return home. In Italy this can apply to grandchildren and great-grandchildren who are born abroad provided that they can trace their heritage to an Italian ancestor born after unification took place in 1861 and none of the intermediate descendants ever renounced their Italian citizenship.

British nationality law on the other hand means that subject to certain (and increasing) restrictions, if you are born on British soil you are a British citizen regardless of your heritage. The USA and Australia are also traditionally Ius Soli countries although with increasing nativist sentiment their nationality laws may also be subject to increasing restrictions. Such a system suits nations who have always taken, and often needed, large volumes of immigrants and who have never feared that large numbers of their countrymen would be persecuted by a foreign tyrant.

These legal regimes do not exist in isolation but are informed by and in turn inform attitudes as to who is and is not a national of a country. Few people in Britain would seriously suggest that a child born and raised in Solihull or Sunderland was not really British, regardless of their parentage, while most would regard someone born in Boston as an American first and foremost, even if they could trace every drop of their blood back to the Mayflower.

Accordingly, the flip side to the broad (but by no means universal) acceptance of oriundi in Italy is the difficulty faced by players (and by extension all young people) born in Italy to foreign parents. Players like ex-Manchester City and Liverpool striker Mario Balotelli and West Ham centre back Angelo Ogbonna have been subjected to appalling racial abuse and told by certain quarters that they are not really Italian. These views are bewildering to most people

Although Balotelli was born in Palermo and raised by Italian foster parents near Brescia, because he was born to Ghanaian parents Italian law deemed him to be a Ghanaian. He was prevented from playing for Italy at youth level until he turned 18 and was eligible to apply for citizenship of the only country he had ever known. The same applied to Ogbonna, who was born in Cassino in southern Lazio to Nigerian parents. 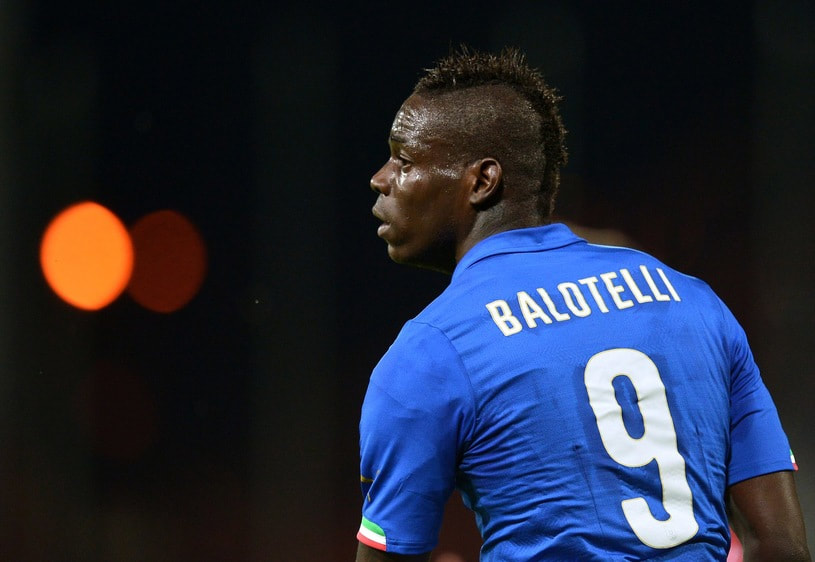 Balotelli received his Italian citizenship the day before his 18th birthdayWhile the loss of the opportunity to play in a few youth tournaments may seem unimportant, the more insidious effect of this law is that it allows racists to claim that Balotelli and Ogbonna are not “real” Italians. Of course Balotelli and Ogbonna are talented and well paid young men whose difficulties pale into insignificance against those of less fortunate children of immigrants whose immigration status remains precarious for the entirety of their childhood.

Such a system may have been appropriate in circumstances where Italy had mass emigration and little immigration but in recent years emigration has declined while immigration has greatly increased. The nationality law of a country reflects its own circumstances and history, but also feeds back into its culture and attitudes. As a result, in recent months there have been increasing calls for Italy to adopt Ius Soli.

Legislation to this effect has already passed the first chamber of the Italian legislature and is due to be considered by the senate. The measures are supported by the governing centre left Democratic Party but opposed by Silvio Berlusconi’s Forza Italia and the Lega Nord. The hope is not only to provide appropriate legal status to the tens of thousands of children of immigrants born in Italy but also, as argued by Roberto Saviano amongst others, that this legal change will affect a change in Italian attitudes to who is and is not an Italian.

At the same time as the flow of Italians emigrating slows to a trickle, the supply of oriundi will also begin to decline and those that are available will be increasingly distant from their Italian roots both in time and ancestry. It would not be surprising to then see the age of the oriundi come to an end.

A lawyer by trade, Sunderland born and of Ciociarian heritage, Ricci supports Sunderland, Juventus and Italy./em>