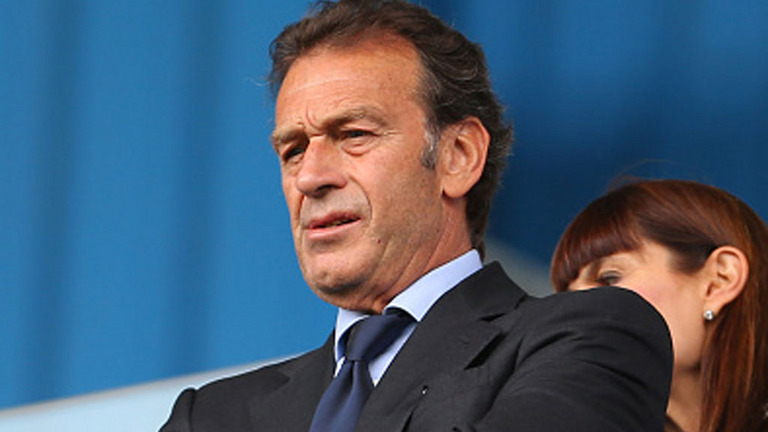 The Cambridge English dictionary defines ‘superstition’ as a “belief that is not based on human reason or scientific knowledge, but is connected with old ideas about magic, etc.” If the pool in charge of compiling this bible of the English language were to opt for the inclusion of an explicatory picture, they would probably consider the face of Massimo Cellino, former President of Cagliari.

In 1992, when he first walked through the doors of Cagliari’s historical headquarter, he was 36 and instantly became the youngest President in Serie A. He ushered in the longest tenure in the club’s history, during which the team played in the top flight for 17 seasons, five seasons in the second tier, two Coppa Italia semi finals and even a UEFA Cup semi final in 1994. His 22-year stay saw some glorious moments for the Sardinians, second only to the days of the great Gigi Riva, and judging from the rituals Cellino performed on and off the pitch, superstition must be credited both as a major aid to Cagliari’s fortunes and as the culprit for some of the team’s most ruinous defeats.

In the summer of 1999, François Modesto made the short trip across the Strait of Bonifacio having being purchased by Cagliari from French side Bastia. Surely unaware of the deep sense of stigma carried by the number 17 in Italy, where it’s an universal sign of bad luck, the Frenchman happened to choose a shirt with a one and a seven on the back for his second season with the sardi. “No problem,” thought the chairman, “let’s be serious, I have to get rid of these old habits and start thinking that a shirt number can’t really affect the way we play.” The following June, with Cagliari 11th on the Serie B table, and with promotion out of the question, Cellino cursed Modesto and issued a ban that prevented every player from picking the number 17.

Obviously, the seat number 17 of the Sant’Elia Stadium was turned into the 16B, but this proved not enough to dispel the evil power of the number because the Italian Federation, while sorting out the Serie A calendar for the 2011/12 season, had their hands guided by the Devil himself and set the Cagliari-Novara clash for Saturday September 17. In order to break the superstition, Cellino could do nothing but publicly ask supporters to wear purple clothes when coming to the stadium. The collective exorcism turned out to be successful, as the rossoblu pulled out a victory with two goals from Thiago Ribeiro and Joaquín Larrivey.

Another singular episode happened the evening of Saturday May 29, 2004, when Cagliari took on Salernitana in the penultimate match in Serie B. It was a crucial match, and a victory could have granted them an early promotion to the top flight, but it didn’t start as expected. When Siyabonga Nomvethe scored the opening goal for the visiting team, Cellino realised there was something wrong in the air. After a while, he finally understood what it was all about: two cars were parked next to the pitch, used as advertising for a local car dealership. The President identified those two vehicles as a source of negative energy and, as soon as he had them removed, David Suazo and Mauro Esposito turned the match upside down, scoring three goals and bringing the team in Serie A again. Obviously, Cellino took great pride in what he achieved, after the game: “I immediately made them remove those cars, and you saw the result.”

But the peak of his superstitious ways was perhaps reached in 2012, when Cagliari hosted Siena on the tenth week. Cellino, a simple man, leapt over a fence and sat with the supporters, in the middle of the stand. Legend has it that, just as he took the first bite off his mortadella sandwich, Cagliari took the lead with a goal from Nenê. In his mind, the only possible result of the equation was that the mortadella sandwich was good luck. Spurred by supporters, he asked for another one, which, sure enough, was able to bring about another Nenê’s goal when entering the mouth of the angry President. The trick even worked for Marco Sau’s goal, and Cagliari went on to crush the bianconeri 4 – 1.

Despite what a more rational person may think, there were times when it wasn’t absurd to assume that destiny was preventing Cagliari’s President from getting what he wanted. What he wanted was a new stadium for his team, and he took unethical means as a way of achieving it.

In 2011, Cellino bought a plot of land in the town of Elmas, with the purpose of building the Karalis Arena, intended to be Cagliari’s new home. It wasn’t long before ENAC (the Italian Civil Aviation Authority) started to severely hinder the project, claiming that the new stadium would be too close to Cagliari Elmas Airport. A legal battle ensued. Cellino was sure ENAC were acting this way because of its plan to expand the airport’s facilities, while he came under investigation for the allegation of purposely increasing the cost of that plot of land in order to sell it to Sogaer, the society in charge of managing the airport.

After years of red tape, Cellino finally gave up on his plan. In 2015, much to his chagrin, the Regional Administrative Court sentenced that the rules ENAC appealed to were incorrect. But it was too late.

The Cagliari President had already moved on to other battles, like building another stadium. This time it wasn’t a dream but rather a necessity, given the fact Sant’Elia Stadium had been partially condemned. The solution to this problem was at hand, and bore the name of Is Arenas Stadium. Situated in the city of Quartu Sant’Elena and home of the local team, the venue was turned into a Serie A-fit stadium in the summer of 2012. On Sunday September 02, against Atalanta, the new Is Arenas was unveiled to the world. Such a shame that it was far from ready to host a game: the fixture was played behind closed doors, there was no press box and the sports hall across the street was used both as a dressing room and as a venue for the post-match press conference.

Later that month, ahead of the clash with Roma, set for Saturday September 23, Cellino addressed fans via the official website, asking them to fill the stadium even if no clearance from the authorities had been granted. Sure enough, the game was postponed, then canceled, and Roma were awarded a 0-3 win by default. This, plus the polemic sparked off by WWF that the noise coming from the stadium on match days disturbed the wildlife in the Molentargius Regional Park, would have been enough for anybody to be fed up with football and throw everything away, but not for Cellino.

The adaption of the ground to Serie A standards went on, slowly but steadily, and by November, Cagliari were able to host Napoli in front of a packed Is Arenas. But more troubles were waiting behind the corner. Right after Cagliari vs. Milan in February, the Italian pay TV company, Mediaset Premium, aired a report on the supposedly bad conditions of the area surrounding the arena, with stairs not up to code and the main road full of old tires. Surprisingly enough, the images showed turned out to be those of a dismissed go-kart track next to Oristano, and had nothing to do with Cagliari. Cellino took legal action against Mediaset.

By the end of February, with Cellino momentarily imprisoned for attempted embezzlement and fraudulent misrepresentation, the Is Arenas was condemned. After three matches behind closed doors, Cagliari had to end their season playing at Trieste’s Nereo Rocco Stadium. The rossoblu President was released the following May, and decided to dismantle the Is Arenas and use the material to mend the Sant’Elia. In October 2013, Cagliari headed back to their historical venue after having played the first part of the new season in Trieste.

In 2015, the Sant’Elia was condemned again and started to be demolished. The squad played in the half-wrecked stadium for two seasons but finally, for the 2017/18 campaign, they had to make do and move to the Sardegna Arena, a temporary ground hastily built in the parking lot of the old one. This however was none of Cellino’s business, since he sold the club in 2014 to purchase Leeds United. He remained with the peacocks for three seasons, during which he had the time to show off his proverbial superstition by firing the goalkeeper Paddy Kenny, guilty of being born on May 17.

Despite what one may think judging from these curious episodes, Massimo Cellino’s personality is striking in that it’s perfectly balanced between backward popular beliefs and a forward thinking individual that’s hardly seen in those convinced that scattering salt all over a given place will have positive consequences.

The reason is that he grew up in a very stimulating family. His father Ercole built an empire of wheat, his mother Fanny had the blood of her uncle Stanislao Silesu, one of the greatest composers at the onset of the 20th century, and all of his siblings made a name for themselves in fields as relevant as medicine, manufacturing and construction. The banditry that threatened every well-off family of Sardinia in the 70s led Ercole Cellino to send his children far from home, with Massimo ending up living in Australia from 1978 to 1983. No wonder that such a personal path made him into one of the most interesting characters in the Italian game, even if it surely would have been the same had he chosen to work in some other field.

One of the first interviews he released as President of Brescia, the club he bought in 2017, shed light on his mindset regarding football management: “This club and this team are surrounded by an environment accustomed to surviving. You’re happy with this state of affairs, with Serie B. But I’m a bit ‘rock’, you know. I like electricity and high tension. There’s the danger of getting hurt, but even that of winning, sometimes. This place is devoid of emotions.” The talk between he and the Bresciaoggi’s journalist Vincenzo Corbetta went on to touch upon other topics, like a new stadium, which Cellino wants to be designed by talented young architects and to be as low-cost as possible.

What stood out in his words was an unrestrained will to change something in the system, not with pretentious and unattainable proclamations, but with little, viable ideas that could turn Brescia into an example to follow, with a particular focus on the people and the game, rather than on money and politics, as exemplified by the way he answered when questioned about season tickets: “I didn’t even want to start selling them, because I still don’t know what kind of show can I offer to these people. If I can give you 100, then I’ll ask 100. If I can give you five, then I’ll ask five. I don’t know what can I give. My message for supporters is: are you willing to bet with me? I did it at Leeds. I promised to refund all the 20.000 season ticket holders if we didn’t end up in the top ten. We finished seventh.”