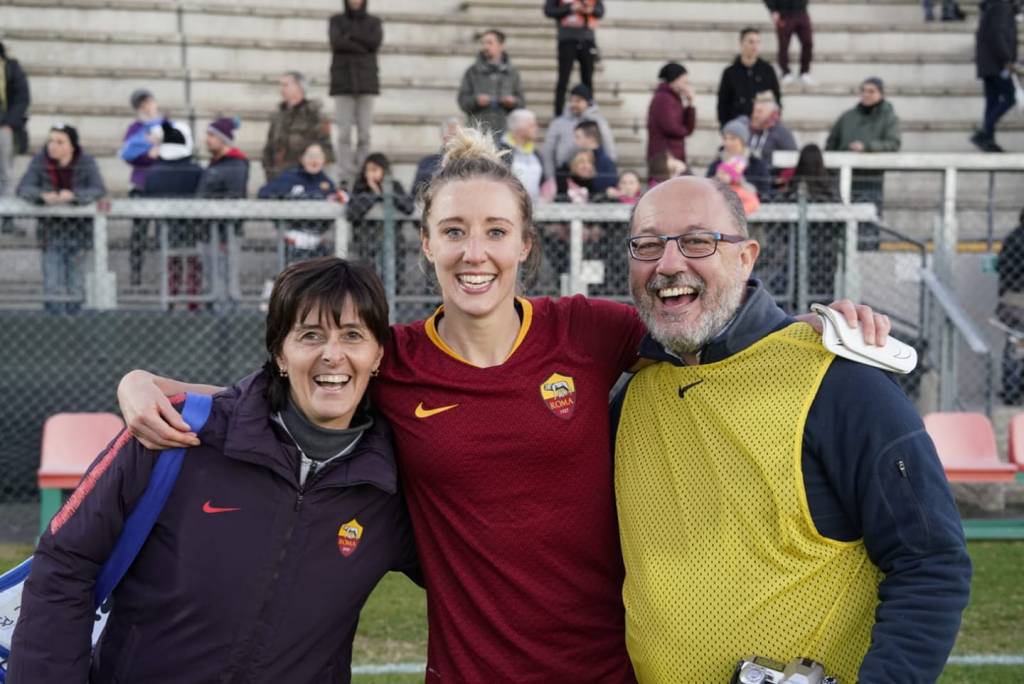 Eagle-eyed fans of British footballers abroad may have noticed a familiar face in AS Roma’s Christmas 2018 video. Putting the finishing touches to the Christmas tree with Robin Olsen and Morgan De Sanctis – as Stephen El Shaarawy took charge of the turkey – was Emma Lipman, who joined the Giallorossi women’s team last summer.

The English defender, who previously played for Manchester City and Sheffield FC, describes her decision to swap her home country for a football journey in Italy as ‘100% the right one for me’.

A year-and-a-half on from making the initial move, it’s easy to see why Emma is happy with life on the Peninsula. Following a successful debut season in Serie A with Verona – Emma appeared in 21 of the club’s 22 league matches – the opportunity arose for the 29-year-old to join AS Roma for the women’s inaugural Serie A campaign. Following Roma’s purchase of Res Roma’s Serie A licence, club president James Pallotta announced that the Giallorossi would be fielding a side in the 2018/19 season. With the club keen to be competitive from the outset and have the women’s team at the heart of its vision, Emma was immediately sold on the idea of joining the Giallorossi.

“As soon as I heard about the interest from AS Roma followed by the club’s plans and vision for the future, I instantly knew it was something I wanted to be a part of,” Emma told TGU in an exclusive interview. “Every player wants instant success, that’s why you play football, but to be part of a project with a much bigger picture, in my opinion, is something much more special. I feel very grateful to be part of such a huge club in its historic first year and I’m excited for what the future holds.”

With the 2018/19 season past the midway point, and Roma having won seven of their first 13 matches, the Giallorossi are occupying fourth place, behind Fiorentina, Milan and Juventus. With games against each of these sides still to come, a top three finish in their maiden Serie A campaign is still within Roma’s reach, though Emma remains grounded.

“I think it’s important to be realistic [about this season],” she said. “We’re a new team, going through a transition period, with no previous playing experience together to reflect on. Therefore, all we can do is take it game by game. The results speak for themselves, how much we have grown in such a short space of time and I am very confident that we will continue to grow even stronger.”

The rise of the Azzurre: How World Cup qualification could be the start of a new era for Italy’s women

The ‘Ladies First’ film gave fans an opportunity to get to know me more as Emma the person rather than just Emma the player. For me this is so important to help with the growth of the women’s game over here in Italy.

As well as having a bright future on the field, it’s no secret that Roma are leading the way for football teams in the world of social media. The club’s quirky posts and irreverent tone have opened Roma up to a new demographic of fans around the world. In addition to the Christmas video, Emma has taken part in ‘Ladies First’, a light-hearted Q&A on the club’s YouTube channel. “We have a very innovative media team who are really dedicated to raising the profile of both the club and the players,” Emma said. “The ‘Ladies First’ film gave fans an opportunity to get to know me more as Emma the person rather than just Emma the player. For me this is so important to help with the growth of the women’s game over here in Italy.”

Looking back on the hugely popular Christmas video – where the players and staff almost made the colossal error of tucking into the feast before club captain Daniele De Rossi arrived – Emma speaks positively of the experience. “That’s the beauty of being involved with a big club like AS Roma, the opportunities are not only limited to on the pitch,” she said. “Being part of the video was great fun and just another example of how much the whole club are embracing the women’s project.”

Though social media brings fans closer to almost all aspects of the game, there’s one magical experience for which there remains no substitute – the thrill of hitting the back of the net in a competitive match. Emma’s first goal in Roma colours arrived in a comprehensive 6-1 victory over Chievo before Christmas. “Of course I was really happy but my main feeling was relief. It had been that long since I last scored a goal I was beginning to think I’d forgotten where the net was!”

On the subject of goals, Emma recently met the club’s all-time top scorer, record appearance holder and perhaps modern day Rome’s most celebrated son, Francesco Totti, who is now a Roma director. “It was a huge privilege to meet such a footballing legend,” she said. “I always admired him as a player from England but seeing how much he is thought of by the Roma fans made me even more grateful for getting the opportunity to meet him. The conversation was limited due to the language barrier but if anything I took away how much love he had playing for this club and how much love he still has for the club now.”

As a keen traveller, Emma has no problem filling her time away from the training field and is enjoying the cultural delights her new home has to offer. “There’s so much to love about living in Italy,” she said. “The food, the weather, the exploring, the wine (on a rest day, of course!), the history, the people, the beach. I sometimes have to stop and realise not only am I getting paid to live here but also to do what I love every single day.”

It’s clear that Emma has no regrets about moving to Italy and Serie A and it’s a journey she would encourage more British footballers to consider. “As the women’s league continues to grow, I can see how Serie A has the potential to become a very attractive offer, both for playing and the lifestyle,” she reflected. “For sure I had moments questioning whether it [moving to Italy] was the right thing to do but I knew If I turned the opportunity down, I would be left with too many ‘what ifs’, and that is something I don’t feel comfortable with. I would rather try something and fail at it rather than not try it at all.”

And with such wise words the interview concluded. We look forward to seeing how Emma’s journey, and that of the women’s Serie A, progresses in the near future!

Grazie to Emma for taking the time out of her busy schedule to talk to The Gentleman Ultra and good luck for the rest of the season! You can follow her on Instagram here.