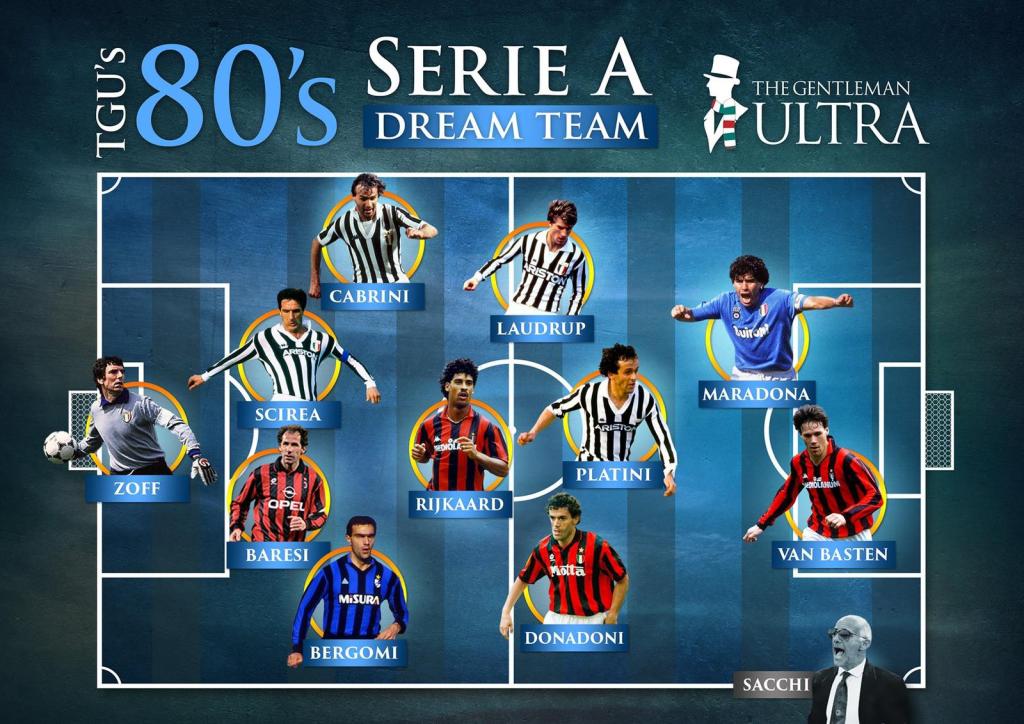 After suffering the sling and arrows that followed the publication of our best Serie A XI of the 1990s article, it felt only right we should put our heads above the parapet once again and look to the preceding decade.

The 1980s was a defining decade for Italian football. The early part was marked by the national team’s unforgettable World Cup triumph while the latter saw the arrival of Arrigo Sacchi who transformed the Italian game and ushered in a new era.

It was a decade of defensive master classes where only the sharpest strikers and most creative midfielders flourished. For many at the time, it represented the pinnacle of football.

As before, we compiled a shortlist of four players for each position and then handed responsibility over to our followers on Twitter via a series of polls. The final results may not be too surprising but as always, some big names had to be left out.

The image of a 40-year-old Dino Zoff lifting the World Cup in his grey Azzurri jersey set a new benchmark for goalkeepers. Arguably the best Italian stopper of all time, Zoff was a pioneer of his craft. A serial title winner with Juventus, he turned goalkeeping from a trade to an art form and he did so in an era when so many talented strikers were drawn to Serie A. His legacy lives on as the likes of Gigi Buffon continue to try and reach those standards set years ago.

With his very specific look: tall, athletic and rather old-fashioned facial hair, it was no wonder that many thought the man they called ‘Lo Zio’ (The Uncle) to be a player from yesteryear. Giuseppe Bergomi did possess many qualities of a defender from the previous era. He was tough but fair, pragmatic, disciplined, good in the air and tactically astute. His aim was always to be a one-club man and he achieved that goal by making over 750 appearances in all competitions for Inter over a 20-year period. Such is his status as the club that even Javier Zanetti refers to him as ‘Mr Inter’. Quite simply one of the greatest defenders Italy has ever produced.

Few players achieve greatness to such a degree that their legacy spans two eras. But Baresi’s place in both our 80s’ and 90s’ dream teams is unquestionable. Throughout these years he marshalled some of the most formidable backlines Italian football has ever seen. In our dream team, he lines up alongside Gaetano Scirea to create what many would consider the greatest defensive duo in Italian history. Even the great Maradona and Van Basten would struggle to score goals past these two in training!

A classy, intelligent and technically-gifted libero, Gaetano Scirea is widely recognised as one of the greatest defenders in football history. In addition to being a mainstay of the Juventus backline from 1974-1988, Scirea was a key player for the Italian national side, winning the World Cup in 1982. That he largely kept Franco Baresi out of the Azzurri side until his retirement in 1986 speaks volumes of Scirea’s talent and dependability. Scirea is one of only six players in European football history to have won all international tournaments recognised by UEFA and FIFA (Antonio Cabrini is another, we’ll let you work out the others at a pub quiz). Scirea is Juve’s third-highest appearance holder of all time and was never sent off in his career.

Antonio Cabrini is the player against which all other Italian full-backs should be judged. His armoury of power, technique, intelligence, attacking flair, passing ability and shooting prowess redefined the full-back role and enabled him to win every UEFA Club competition as well as the 1982 FIFA World Cup. The man they called Bell’Antonio sure was beautiful to watch.

Described by Michel Platini as one of the ‘best Italian footballers of his generation’, Roberto Donadoni was the archetypal wide midfielder. Usually deployed on the right, he was fleet of foot, accurate, incisive, creative and tireless. He was perfectly suited to Sacchi’s high octane Milan side and quite simply he was a forward’s dream. “My greatest satisfaction,” Donadoni once said, “comes from making the pass that leads to the goal.” And playing with Marco Van Basten, he made plenty.

Despite bold attempts to destroy his own legacy by violating ethics and generally being a complete arse, Michel Platini did enough on the pitch to still be remembered amongst the greats. A graceful and creative artist with the ball, the Frenchman was a master of the midfield craft. He was quick, precise and could read the game one page ahead of everyone else. In fact, he was magnificent. What the hell happened?

When AC Milan were at their majestic best in the late 1980s, the midfield strings were being pulled by Dutchman Frank Rijkaard. Although he only joined Milan in 1988 (a year after compatriots Ruud Gullit and Marco van Basten) the powerful midfielder with an eye for an important goal was a popular choice among Gentleman Ultra readers, such was his impact in the Rossoneri jersey. An extremely versatile player, Rijkaard originally played as a central defender before legendary Milan coach Arrigo Sacchi decided his skills were best served in a holding midfield role. During his five years with Milan, Rijkaard won two European Cups and two Serie A titles.

The Danish winger’s time in Italy wasn’t all smooth sailing. When he arrived at Juventus, the limit on foreign players meant he was immediately loaned out to Lazio. Even so, he made his mark over two seasons with the Roman club before returning to Juventus to play over 100 games, netting 16 goals. His outstanding performances and overall quality saw him snapped up by Barcelona where he spent five successful years. He left Italy aged 24 with a Scudetto and Intercontinental Cup in his trophy cabinet, and with a reputation as one of the best young midfielders on the planet.

Was a vote really required for the number 10 role? How do you put Diego Maradona’s spell in Italy into words? Explosive. Captivating. Genius. God (or Devil, as some Italian newspapers preferred to call). These are just a few for starters.

In the summer of 1984, much to the amazement of the football world, Napoli – without a single Serie A title to their name – signed the greatest player in the world. By the end of the decade, the club had won its first Scudetto and a UEFA Cup. At the heart of it all was the Argentine forward who, every second week, would whip the San Paolo stadium into a frenzy with his dazzling displays and lack of deference to Italian football’s big names. For most, he’s the first name on any all-time team sheet.

Technically there were no limits to what Van Basten could do with a football. Alongside Dutch compatriots Rijkaard and Gullit, he formed an integral part of the Arrigo Sacchi-led revolution at Milan during the late 1980s. It was a revolution that transcended the silverware sitting in Casa Milan’s ostentatious trophy room. Out with Nereo Rocco’s Catenaccio and in with a new era of Total Football, one spearheaded by the elegance and grace of Marco Van Basten.

The former shoe salesman (who started coaching his local team because he wasn’t good enough to play for them) is still regarded as one of the greatest managers of all time thanks to his spell in charge of the mythical Milan side of the late 80s. Very much a man of his time, he laid the tactical blueprint for a golden era of Italian football. After bagging eight trophies with Milan, he went on to guide the Italy national team to the 1994 FIFA World Cup final, where a penalty shootout defeat to Brazil sparked a downturn in his fortunes.