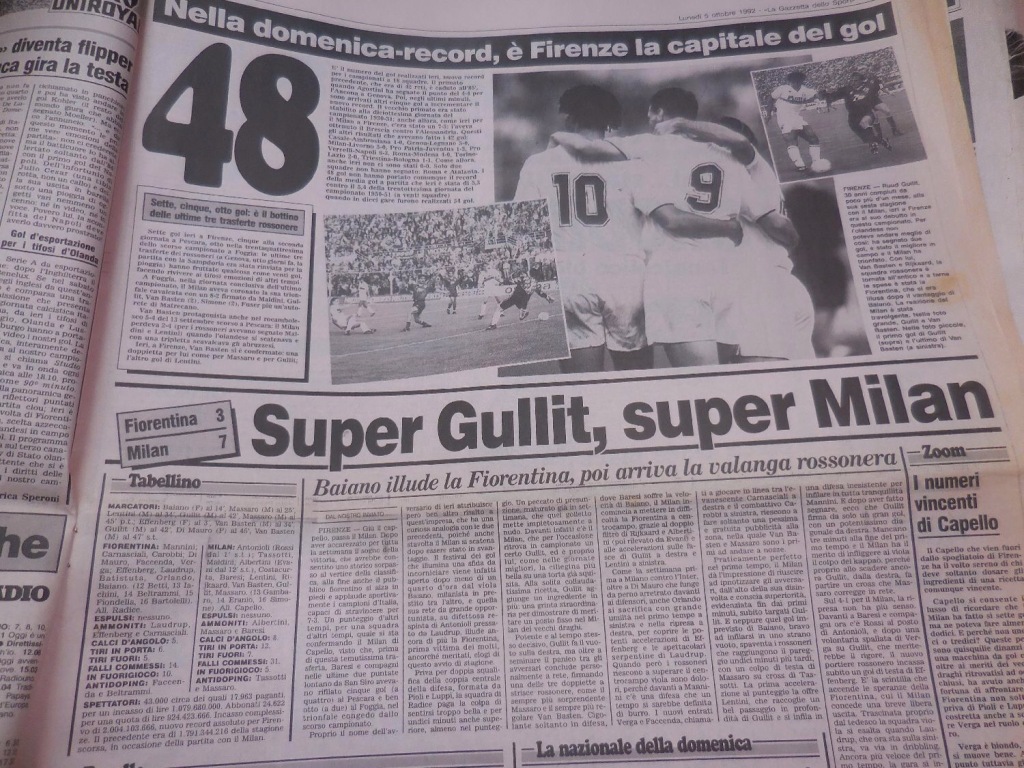 A Ruud Gullit masterclass, match-winning moments of magic from Marco van Basten, a personal duel between Sebastiano Rossi and Stefan Effenberg and 10 goals; Sunday 4 October 1992 was an afternoon to remember at Fiorentina’s Artemio Franchi stadium.

The 1992/93 Serie A campaign had kicked-off on the first weekend of September with the reigning champions, Fabio Capello’s AC Milan, favourites to retain the Scudetto following a remarkable unbeaten 1991/92 season.

Not resting on their laurels, Milan, backed by future Prime Minister of Italy Silvio Berlusconi’s millions, added to their already impressive artillery by signing French striker Jean-Pierre Papin and Montenegrin attacking midfielder Dejan Savicevic (then a Yugoslavia international). Milan also broke the world transfer record by bringing in Torino’s star player Gianluigi Lentini for £13 million. Understandably, the latter news did not go down well with Torino fans, some of whom took to the city’s streets to protest against the move.

Although not matching Milan’s lavish outgoings, Fiorentina had also made some exciting additions during the summer. Winger Brian Laudrup, fresh from Denmark’s Euro 92 triumph, and the talismanic German midfielder Effenberg both arrived in Florence from Bayern Munich.

For those keeping a keen eye on the Italian championship, it shouldn’t have come as any great surprise that such a feast of goals was served up on that October afternoon. Up to that point in the season, a total of 30 goals had been scored in the seven games involving Milan or Fiorentina. Milan were sitting joint top of the table with a ‘Lentini-less’ Torino, albeit having played one game fewer after their week four fixture at Sampdoria was postponed due to severe storms in the city of Genoa, which sadly claimed two lives. Although collecting maximum points from their opening three matches, the concession of four goals at Pescara on matchday two, including two own goals by the normally peerless Franco Baresi, highlighted potential frailties in Milan’s backline. A hat-trick from van Basten, arguably the world’s top striker at this time, and goals from Paolo Maldini and Lentini (a terrific overhead bicycle-kick no less) had spared Milan’s blushes.

Fiorentina – led by coach Gigi Radice, and who had finished the previous season in 12th place – were defending an unbeaten record themselves, having earned commendable draws with Genoa, Inter and Lazio and demolishing newly-promoted Ancona 7-1.

Thus, the stage was set for a classic. Visitors Milan took to the Artemio Franchi field in all white, with Fiorentina sporting their customary viola. In keeping with 90s style, Fiorentina’s goalkeeper jersey was splashed with colour and, in a bizarre twist, surely unthinkable in modern day top flight football, was manufactured by Uhlsport, as opposed to the outfielders’ Lotto-designed kits.

The first of the afternoon’s 10 goals arrived in the 14th minute when Fiorentina’s Francesco Baiano, who would later play for Derby County, tapped home on the rebound after a fine passing move had torn through the heart of Milan’s midfield and backline.

Just as it looked as though Fiorentina were set to soar, they had their wings ruthlessly clipped in 20 first-half minutes that typified Milan’s devastating attacking threat. In the 25th minute, Italian international Daniele Massaro nodded in the equaliser from a right-hand-side Mauro Tassotti cross. Ten minutes later, the champions went in front courtesy of a deft Lentini chip from a Gullit assist. Three minutes before the break it was Gullit’s turn to find the net. Fiorentina goalkeeper Alessandro Mannini got his hands to a thumping right foot shot from the Dutchman but couldn’t keep the ball from hitting the net. By this stage, Gullit was running amok. When a terrific, outside-of-the-boot, van Basten cross-field pass found his fellow Dutchman in space on the right-hand-channel, Gullit’s pin-point delivery was tapped in by the clinical Massaro to give Milan a 4-1 lead at the break.

If Fiorentina were to have any chance of extending their unbeaten start to the season the second- half would need to bring a special performance from i Viola. The home side got off to the perfect start when Effenberg eventually headed home after Rossi, who replaced the injured Francesco Antonioli in the Milan goal at half-time, kept out a Gabriel Batistuta header following excellent wing play from Laudrup. The combative German international Effenberg and Rossi then went head-to-head in the goalmouth in a battle to retrieve the ball from the net. The same two men were the protagonists in the game’s next key action when Rossi superbly tipped a thunderous Effenberg free-kick onto the upright. Rossi came to Milan’s rescue again when he got his giant frame down to keep out a close-range header from Fiorentina midfielder Fabrizio Di Mauro, who had been left scandalously unmarked on the six-yard-line from a corner kick.

Just as the hosts looked like they might go on to salvage something from the match, Milan slammed the door shut on them once again. In the 78th minute, and after a Gullit chip had been ruled out for offside, van Basten crashed in Milan’s fifth goal with a powerful shot from 18 yards out. Then, with four minutes of normal time remaining, Gullit capped a sensational performance when he headed home smartly from a van Basten cross to put Milan 6-2 in front.

However, there still remained time for some more haphazard Milan defending. After a tangle with Effenberg, Baresi stumbled over the ball allowing the German to square to Di Mauro, who this time left Rossi with no chance as he found the top corner from inside the six-yard box.

A pulsating afternoon’s action came to a close with arguably the finest goal of the match. Again, Gullit was involved in the build-up, the Dutchman sending a pass on to Tassotti, who had ventured deep into Fiorentina territory from right back. The defender’s cross was met by a brilliant first touch from van Basten, who, displaying great adjustment, fixed his feet, shifted the ball from right foot to left before sliding it into the net for his sixth league goal of the season.

The 10 goals in Florence were part of a record-breaking Sunday in Serie A as a total of 48 were scored across nine matches, with 32 of the goals coming in just four of the games. In addition to Milan’s seven-goal-salvo, Genoa and Ancona shared eight goals in a 4-4 draw, Lazio beat Parma 5-2 – a match that included a hat-trick from Giuseppe Signori, who ended the campaign as Serie A’s top scorer with 26 goals – and Udinese thrashed Pescara by the same scoreline. In any other weekend, Juventus’ 3-2 victory away at Napoli would have been top-billing in the weekend highlights shows.

Two weeks later, Milan were involved in another thriller as they beat Lazio 5-3 at the San Siro, a match enjoyed by UK viewers on Channel 4, many of whom would have tuned in to see Englishman Paul Gascoigne, who joined the Rome-based club from Tottenham Hotspur in the summer of 1992.

Milan did, ultimately, retain the Scudetto but it was a much shakier campaign than the previous season’s unbeaten march to the title. Despite more high-scoring victories, including a 5-1 triumph at Napoli, the Rossoneri’s 58-match unbeaten run came to an end in March when a Faustino Asprilla free-kick earned victory for Parma in front of a stunned San Siro. An ankle injury sidelined van Basten for three months and, at one stage, the champions went seven games without a win, allowing rivals Inter into the title race.  However, it was the red and black half of the city celebrating again as the title was secured on the penultimate weekend following a 1-1 draw with relegation-threatened Brescia.

Despite ending the calendar year in joint-second place, Fiorentina had a calamitous second half of the campaign. I Viola plummeted down the table and were relegated on the final day of the season despite defeating Foggia 6-2.

In January, having earned 15 points from a possible 26 (three points for a win had yet to be introduced in Serie A) Fiorentina, somewhat inexplicably, parted company with Radice following a 0-1 defeat at home to Atalanta. Giancarlo Rinaldi, Fiorentina fan and co-author of Football Italia: The Official Companion to the 1993/94 Season, recalls Radice falling foul of Vittorio Cecchi Gori, son of the then club owner Mario Cecchi Gori. “1992/93 was a crazy season and that [sacking of Radice] was probably its most crazy moment,” Giancarlo says. “News pretty quickly leaked out of the bust-up between Cecchi Gori and Radice in the dressing room at half-time in the game with Atalanta and he was gone after that match even though we had been second in the table before that defeat.”

The Viola replaced Radice with former manager Aldo Agroppi, who had left the club in 1986. Agroppi lasted until April, winning only two matches and leaving Fiorentina a single point above the relegation zone. Luciano Chiarugi, a former Fiorentina player, was next in line to try and halt the club’s inevitable slide down to Italian football’s second tier.

Giancarlo adds that the 7-3 defeat to Milan was typical of Fiorentina’s start to what turned out to be a bizarre season. “I don’t think we failed to score in a single match before the Atalanta defeat – including a 7-1 drubbing of Ancona and a 2-0 win over Juventus,” he says. “But a meddling president can be a dangerous thing. That last day victory over Foggia was excruciating as other results went against us and our fate was sealed. Maybe one of the greatest cases of a team ‘too good to go down’ getting relegated.”

Despite a humiliating relegation, Fiorentina scored 53 goals in 34 Serie A games, a total more than 11 of the teams who finished above them managed. Season 1992/93 was a remarkable nine months in Serie A. And to think it all happened in a league somewhat lazily referred to as dull and defensive.