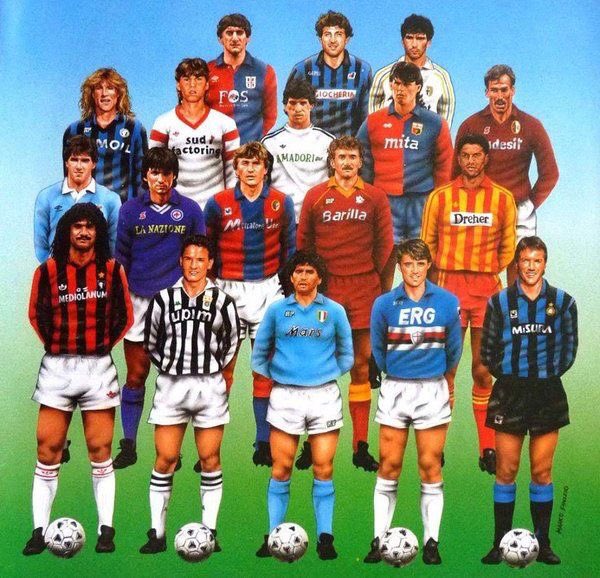 We at The Gentleman Ultra are fascinated by football shirts, especially Italian football shirts. Many of the greatest jerseys ever made originated from Serie A.

In a new series, we’ve asked our team to name their top five shirts from the world of Italian football. First up is TGU founder Richard Hall.

For many, this shirt encapsulates Parma’s halcyon days of the 1990s. A ridiculously talented squad, coached by Alberto Malesani, won their second UEFA Cup of the decade, in addition to the Coppa Italia. The Gialloblu fronted an early title challenge before tailing off at the beginning of 1999, instead focusing on cup competitions.

That worked out rather well.

Richard: If you loved Italian Football in the late 1990’s, you loved Parma. With names like Gigi Buffon, Juan Sebastian Veron, Hernan Crespo, Faustino Asprilla and more, they gave all the big boys in Serie A a bloody nose. In this beautiful, different and iconic jersey, they won the Coppa Italia and the UEFA Cup this term finishing fourth in the league. This for me was also the shirt that got away and still needs purchasing.

Il Granata have a history of beautiful shirts, however their away efforts don’t usually tend to spring to mind. This one however is an exception to the rule. This was also the season Joe Hart swapped Manchester for Torino.

Richard: I bought this shirt because of its sheer beauty. Everyone loves a sash but this away strip was my choice as it links in to Torino’s 110th anniversary and it is also in honour of River Plater who have long lasting ties with Toro. The sponsor-less version is superior to the version the players actually wore, as it has no sponsor. Its simplicity makes it one of the best in Italian Football history for me.

One of the most iconic football shirts of all time. Maradona. Mars. Magic.

Napoli seemingly hit a home run every season during the Maradona era, with every shirt better than the last.

Richard: Watching Diego Maradona, Careca and Fernando De Napoli on BSKYB are my earliest footballing memories. How can you not love the San Paolo, this iconic shirt (Mars was cool in the 1980’s) and those players were also. Ottavio Bianchi’s men managed to win the UEFA Cup against VFB Stuttgart, their first, and last, piece of European silverware.

Generally considered one of the finest jerseys ever produced, this effort from the Rossoneri is associated with greatness, that of the ‘Invincible’ side that eventually went 58 games unbeaten in Serie A.

Arrigo Sacchi left Milan to take over the Italian national side in December 1991, but this didn’t stop their relentless march to the first of three back-to-back titles under new boss, Fabio Capello.

Richard: I must confess that even as an Inter fan, I requested my father bring me back this shirt when on business in Milan. At 11 years-old I watched what is arguably, the best club side of all time. Sacchi had built a side that with the three Dutchmen, Marco Van Basten, Ruud Gullit and Frank Rijkaard at the heart of it. The defence was unrivalled and Sebastiano Rossi was one of the best. This was the invincible team.

It’s difficult to visualise this shirt and not think of Lothar Matthaus. The German dynamo was signed, along with Andreas Brehme, in the summer of 1988 and instantly made an impact in Italy.

The Nerazzurri won Serie A at a canter: breaking the points record in the-then 18 team, two-points-for-a-win era (one that would remain unbroken). Under the guidance of Giovanni Trapattoni, Inter would win the title on 58 points, and only lost twice all season.

It would be their last title for 18 years.

Richard: My first kit for the team I support was this majestic beauty. My father brought it back from Milan, and I spent the season watching on BSKYB as Martin Tyler commentated on my favourite team of all time. Lothar Matthaus was immense, Walter Zenga, unbeatable, Andreas Brehme redefined the full back position and Aldo Serena couldn’t stop scoring as Inter won Serie A.