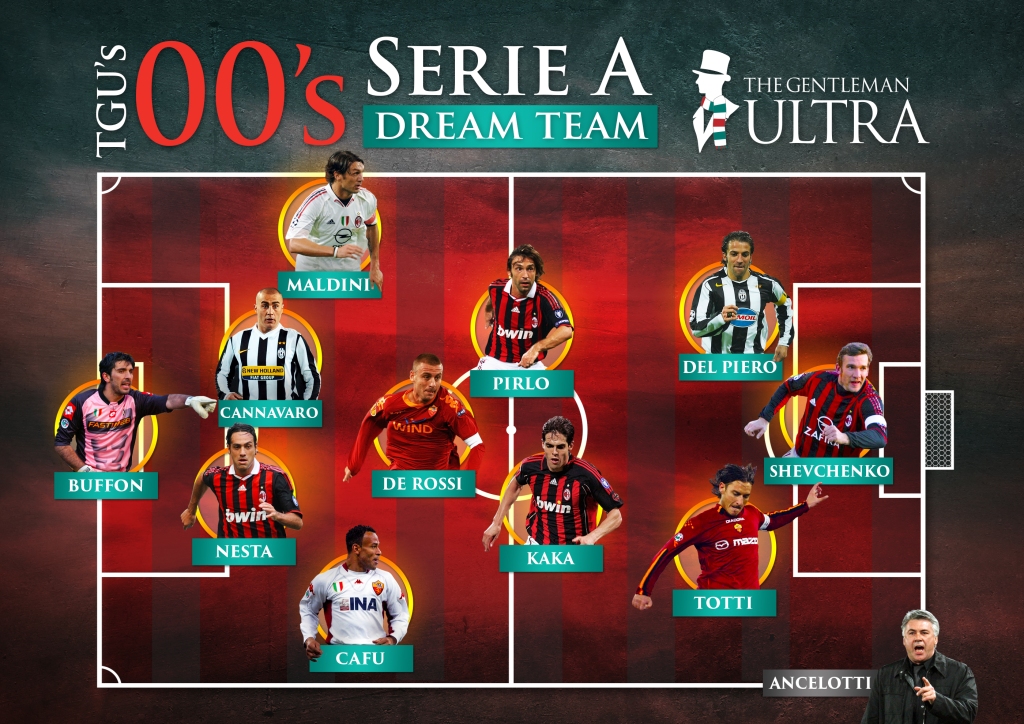 Following the publication of our Serie A team of the 1980s and 1990s articles, it was only natural we would tackle the 2000s next. After the golden era of the 1990s, the succeeding decade had a lot to live up to – and it had it all. As well as showcasing some incredible footballing talent, the 2000s also brought the Calciopoli scandal, a debt crisis that threatened to bury the Italian game, a World Cup win for the national team and ended with an exodus of the kind of star names that had defined the league for decades.

After compiling a shortlist, we handed responsibility over to our Twitter followers to choose one player for each position. The result was a formidable-looking team that would strike fear into the heart of any opposition on the planet. But as usual, there were a few surprise omissions.

‘Gigi’ Buffon is, without doubt, the goalkeeper of this decade and it could be argued is the best goalkeeper of all time. He started the 2000s with a huge £32m move to Parma; he was the most expensive custodian in history. He went on to countless titles and smashed record after record with Juventus. He stayed with them during Calciopoli, whilst winning a World Cup at the same time. His professionalism and attitude on and off the pitch were exemplary and he managed to change his game after a back injury. Buffon is probably the best in his position there has ever been, as he has inspired so many and redefined what it is to be world-class.

Regarded as one of Serie A’s finest foreign imports, Brazilian right-back Cafu spent the first eight years of the new Millennium dominating the right flank of football pitches across Italy.

Nicknamed il Pendilino – the Express Train – Cafu was a master of the overlapping run and an integral member of AS Roma’s Scudetto-winning team of 2001. Although famed for his attacking style, Cafu was a very reliable defender and left the capital city for AC Milan in 2003, where he went on to win a further league title and a Champions League winners’ medal in 2007 at the age of 36.

Football trivia enthusiasts will recognise Cafu as the only player to have played in three consecutive World Cup finals and as the Seleção’s most-capped player.

If one man-made defending fashionable in the 2000s, it was Alessandro Nesta. He was uncompromising yet elegant. Composed yet flagrantly cynical when required. His reading of the game ensured that even against Serie A’s greatest forwards (and there were plenty during the noughties), he often came out on top.

Christian Vieri called him Italy’s greatest defender in a generation whilst Zdeněk Zeman, one of the most attacking coaches in Calcio history, claimed that he was “the best defender in the world for many years and could take them all on playing on his own.” A world champion in 2006, the Roman born defender also won three Scudetti (one with Lazio and two with Milan) and two Champions League titles during the decade. Were it not for desperate misfortune with injuries, we would likely consider Nesta the most naturally gifted defender Italy has ever produced. And that is no exaggeration – just ask Bobbo Vieri!

Cannavaro was the universal defender, able to play anywhere across the back-four and perform the role with calmness and authority. His intelligence, versatility, skillfulness, stamina and pace made him indispensable for his clubs and country for much of the decade. A reference point of excellence for those around him, he enjoyed a sustained period of greatness in the early 2000s which culminated in a World Cup win, and Ballon d’Or and FIFA World Player of the Year Awards in 2006.

Paolo Maldini should be included in the team of every decade he played in and this is why. The Maldinis are an institution in Milan, they know what it is to be Rossoneri and that is because he defined what it is. He brought class, professionalism, a respect for history and a determination for winning. There is no question he is the best left-back of all time and when you read the list of what he has won in the game it seems endless. Described as a ‘Gentleman and Icon of the game’ there is no doubt that he deserves this place.

An idol of the AS Roma tifosi, Daniele De Rossi was recognised as one of the world’s most complete midfielders during the second half of the decade.

Tenacious, perhaps to a fault given his yellow and red card collection, and overtly passionate, De Rossi was blessed with great vision and positional sense. The Rome-born midfielder brought steel and authority to Roma’s play, protecting the defence and providing the perfect complement to the flair and genius of Francesco Totti, who De Rossi would eventually replace as the Giallorossi’s captain and bandiera the following decade.

Andrea Pirlo is like no other footballer on the planet. He represents the inscrutable beauty of the game in human form, like an avatar of the footballing Gods sent to vindicate followers and convert non-believers. Pirlo delivered a one-man golden age of football and remains the past, present and future of the game.

The sight of Ricky Kaka gliding across the San Siro turf, ball under his spell and defenders at his mercy, became iconic during the 2000s. The Brazilian had an aura that only world-class players possess. One that strikes fear into opponents and mesmerises supporters.

Kaka’s crowning moment came in 2007 when he inspired the Rossoneri to Champions League glory and picked up the Balon d’Or for his troubles. His virtuoso goals against Celtic and Manchester United captured him at his majestic best. Two years earlier, on that fateful night against Liverpool in Istanbul, he exhibited the poise and precision that also made him a world-class creator, laying on one of the greatest assists in modern Champions League history for Hernan Crespo. Ricky Kaka, it was a pleasure.

Alessandro Del Piero was going to find it hard to match what he did in the 1990s but he achieved it. His partnership with David Trezeguet was legendary and it was his role as leader and superstar that propelled him even further into the hearts and minds of the footballing community. Another man who stayed with Juventus in Serie B, another man (like Buffon) who was instrumental in winning the World Cup at the same time, these were his peak years. ‘The Old Lady’s’ all-time leading goal scorer achieved this in style, he had everything in his arsenal and he used it to good effect.

Andriy Shevchenko beat out stiff competition to earn his place in our Serie A team of the noughties. Pitted against Zlatan Ibrahimovic, Christian Vieri and Luca Toni, the former AC Milan forward won almost half the vote in our Twitter poll. In his pomp, Sheva perhaps had the edge on all three of these great goal-scorers. His movement, his finishing and his ability to take a game by the scruff of the neck made him the scourge Serie A’s toughest defenders. Marco Materazzi tried on numerous occasions to rough up the Ukrainian with little success.

Sheva’s numbers and accolades speak for themselves. 175 goals in 322 games make him the club’s second-highest ever goal-scorer behind Swedish legend Gunnar Nordahl. These goals helped Milan lift two Serie A titles and a Champions League trophy during Sheva’s seven years in Rossonero.

We only have 100-odd words here so let’s get to the point.  Exquisite chips against rivals Lazio and Inter, a sensational outside-of-the-boot volley at Sampdoria – a goal that brought a standing ovation from the home supporters – a telepathic partnership with the mercurial Antonio Cassano and some of the greatest assists of all time. These are but a small selection of Francesco Totti’s scrapbook.

A one-club man, Totti led AS Roma to a Scudetto triumph in 2001, only the third in their history, and is regarded as one of Italy’s most talented players of all time. Following his highly emotional retirement in 2017, Totti has been treating the futsal world to some of his trademark wonder goals.

Kind, humorous and the epitome of calmness, Carlo Ancelotti arrived at Milan in 2001 and immediately fostered a winning mentality. His decision to deploy Andrea Pirlo as a deep-lying playmaker was a masterstroke that transformed the team’s attacking threat and ushered in a new period of success. Despite only winning one Serie A title with the Rossoneri, a haul of seven other trophies including two Champions League crowns was enough to convince voters he deserved the role of Mister in our team of the 2000s – and by some margin.